An NHL career never did materialize for former Chicago Blackhawks top prospect Ville Pokka. After a trade last season took him to the Ottawa Senators organization, he bolted for the KHL and signed with Avangard Omsk in the summer. Pokka has now signed a one-year extension with his KHL club, ending any chance he was going to return to North America this year. Klas Dahlbeck, who played for Chicago as well as the Arizona Coyotes and Carolina Hurricanes, has also re-upped in the KHL, signing a one-year extension with CSKA Moscow.

Pokka, 25, was originally selected 34th overall by the New York Islanders in 2012, but was one of the big pieces sent to Chicago for Nick Leddy in 2014. At that point, the young defenseman looked like a potential star after putting up 27 points in 54 games during his final year in Finland. Pokka got off to a great start with the Rockford IceHogs, and continued to rack up points throughout his minor league career. Unfortunately, his foot speed and defensive awareness were just never enough to earn a chance at the NHL level. He was traded to Ottawa without ever suiting up for Chicago.

Dahlbeck meanwhile was also a Blackhawks prospect for a time, selected by them in the third round of the 2011 draft. He made his debut for the club during the 2014-15 season but was sent to Arizona along with a first-round pick to bring Antoine Vermette to Chicago. He would end up playing 170 NHL games before leaving last season for the KHL, and won a Gagarin Cup with CSKA recently.

Finland has announced their final roster for the upcoming World Championship, and it is filled with young NHL talent. The Dallas Stars will be quite pleased with the results, as both Miro Heiskanen and Julius Honka will be present on defense. The entire group is as follows:

Heiskanen’s presence on the team is especially noteworthy given that he is only 18 years old still, and made it over other top young players like Olli Juolevi. The third pick in the 2017 draft, Heiskanen is an incredibly mobile two-way defender that should be an impact player in the NHL before long. The Stars will watch to see if he and Honka get any time together and can start to build chemistry, as the pair could be used together for years to come.

For Rantanen, a good performance at the Worlds would be just another feather in his cap for the 2017-18 season. After scoring 20 goals last season on a dreadful Colorado team, he and Nathan MacKinnon formed one of the league’s most dangerous duos this season and racked up the accolades. Rantanen finished with 84 points, a huge total for a 21-year old winger still learning how to best use his big frame in the NHL.

After clearing waivers today, Chris DiDomenico is on his way to Chicago. The Ottawa Senators have traded the forward to the Chicago Blackhawks in exchange for defenseman Ville Pokka. Both players can immediately be sent to the minor leagues, since that was where they were assigned when the trade occurred.

DiDomenico was finally slipped through waivers after being claimed and then re-claimed by Tampa Bay and Ottawa earlier this season. With that came some flexibility, and Chicago has decided that was enough to pull the trigger to bring him into the Rockford picture. Whether he’ll get time at the NHL level is unclear, but he can now be moved up and down for the time being.

Pokka on the other hand has yet to make his NHL debut, and didn’t look likely to make it anytime soon for the Blackhawks. The 23-year old defenseman was selected 34th-overall by the New York Islanders in 2012, and has shown good offensive ability in the minor leagues. Unfortunately, that has come with a lot of struggles in the defensive end and a lack of any real consistency on the ice. That sort of wildcard is exactly the kind of risk Ottawa is willing to take as they try to build their club back up.

Interestingly, DiDomenico is scheduled to be an unrestricted free agent this summer and won’t help the Blackhawks at the NHL level in any meaningful way unless they re-sign him (provided the team doesn’t go on an incredible hot streak and slip into the playoffs this season). Whatever value he’ll bring this season to Chicago or Rockford was apparently enough to give up on Pokka, who clearly had been passed over several times by other prospects in the organization. Pokka is a restricted free agent and could become a Group VI UFA in 2019 if he isn’t given an extended opportunity at the NHL level between now and then.

The transaction freeze is coming quickly in the NHL, as all 31 teams will lock down their rosters between December 19-27th. That means they have just a few days left to make any trades or waiver assignments they need, leading to daily intrigue around the league. We’ll keep track of all the minor moves of the day right here.

The last Friday before the season begins, and just a few more days until teams have to submit their final rosters. As we head into the final few preseason contests, some teams are still holding onto a huge roster. The waiver wire is sure to be filled over the next few days as teams make their final cuts. As always, we’ll have all the movement right here throughout the day.

The Los Angeles Kings have come to an agreement with another one of their restricted free agents, signing Kevin Gravel to a one-year two-way contract worth $650K. Interestingly, Gravel had elected arbitration and was scheduled for a hearing on August 2nd, but instead took the league minimum on a one-year deal. The team did not release the guaranteed or AHL salary, likely part of why he settled.

Gravel played 49 games for the Kings last season in his first extended look with the team, registering seven points in just over 14 minutes a night. With the departure of Brayden McNabb to the Vegas Golden Knights, Gravel will likely be asked to play a bigger role and could even find himself in a full-time gig. He is still waivers exempt however, giving the team options if they think someone else is a better option on the bottom pairing.

Stay with PHR for all of the free agency signings this off-season. As of noon ET on July 1st, unrestricted free agency is open, but not before many extensions earlier in June. This page serves to organize everything in one spot, and are linked to the PHR story that corresponds with the signing. All July signings will be separated by date while June signings are organized alphabetically by team. It will be updated as soon as stories post.

Please note that signings on this list start on June 12.

END_OF_DOCUMENT_TOKEN_TO_BE_REPLACED

According to Scott Powers of The Athletic, Ville Pokka has signed a one-year contract with the Chicago Blackhawks. No financial details were released, though it certainly couldn’t be very expensive seeing as Pokka has yet to make his NHL debut.

With the Blackhawks still currently over the cap for next season, using players like Pokka on extremely cheap deals will be paramount to their success next season. Whether he’s ready to make his NHL debut or not, it’s likely that he will at some point next season. A restricted free agent now, Pokka is still two years away from using Group VI free agency should the Blackhawks not give him a chance in the NHL.

Registering impressive point totals in the AHL, the 34th-overall selection from 2012 still has impressive upside. It’s his all-around game that hasn’t been refined enough to trust with NHL minutes, but sooner or later the team will need to try.

The Blackhawks have signed a number of their restricted free agents, and let a number of them go to free agency without issuing a qualifying offer. Dennis Rasmussen, originally believed to have been issued one has apparently not, and will become a UFA on July 1st.

The free agent period is now less than two weeks away from opening up and there are several prominent players set to hit the open market while many teams have key restricted free agents to re-sign.  Here is a breakdown of Chicago’s free agent situation.

Key Restricted Free Agents: G Anton Forsberg – Although he wasn’t the headliner in the Artemi Panarin for Brandon Saad swap, Forsberg is an intriguing young goalie who should settle in as the replacement for Scott Darling to play behind Corey Crawford.  He hasn’t had much success yet at the NHL level which should keep the asking price low despite a stellar season at the AHL level in 2016-17.  He’s due a qualifying offer of $715K and a one year deal for Forsberg should come in close to that.

D Ville Pokka – Pokka has yet to play at the NHL level after spending the last three years in Chicago’s farm system but that may very well change next season.  His production took a notable dip with Rockford (from 45 to 30 points) but he’s still an intriguing two-way defender.  Contract talks have already started and while he’s due a two-way qualifying offer just under $875K, he’s a candidate to take less than that in exchange for more guaranteed money, a move that may help his push for a roster spot in 2017-18. 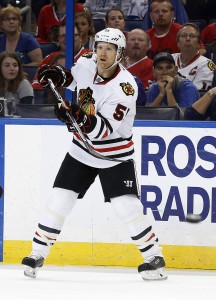 Key Unrestricted Free Agents: D Brian Campbell – His second go-round in Chicago wasn’t anywhere near as successful as his first but that was to be expected given his age and the role he was brought to play.  Campbell still did a decent job in a bottom half spot in the lineup where he averaged 18:26 per night, his lowest ice time in more than a decade.  Now 38, Campbell has indicated that he would like to stay in Chicago but he may have to take another pay cut from the $2.25MM he earned (including bonuses) this past season in order to do so.

D Johnny Oduya – GM Stan Bowman brought Oduya back into the fold just before the trade deadline in order to bolster their back end but that was after that had squirreled away a bit of cap space with Dallas retaining half of his $3.75MM cap hit as well.  That won’t be the case in free agency so unless he’s willing to sign a one year incentive-laden contract, he’s probably not an option to come back.  He’s not an ideal top four on a contending team but he should still receive lots of interest as a dependable veteran third pairing player.

Projected Cap Space: With Marian Hossa out for the season and expected to be headed for LTIR, Chicago may have a little bit more room to work with this summer.  However, as things stand, they sit at $76.5MM in committed contracts to 21 players per CapFriendly which is already $1.5MM over the cap.  Considering that they will want to be under before they can put Hossa on in-season LTIR (to give them some in-season payroll flexibility), there’s some more cutting that will need to be done before they can look towards adding in free agency.