Washington has locked up a prized free agent for eight years. The team announced an eight-year extension for T.J. Oshie today, paying him $5.75MM per season. As we wrote earlier in regards to the Chicago Blackhawks rumored interest, it seemed far-fetched that there was ever really a chance of that. There had been clear interest from both sides between Oshie and the Capitals since the end of the season, and it came together with a cap hit and term that fills both sides needs. 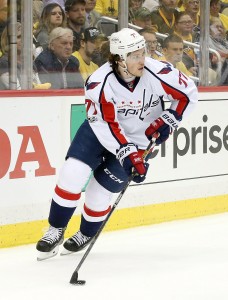 There was some concern that the Capitals might not be able to bring Oshie back when the NHLPA did not use the entire 5% salary cap escalator, but by agreeing to more years the team kept the cap hit low enough to fit into their scheme. Those years will pose a problem down the line—Oshie will turn 31 in late December—but right now keep a key player in town for a reasonable salary. The deal will be paid out like this and also includes a modified no-trade clause :

That structure gives Oshie some lockout insurance should the league have a work stoppage in 2020-21, and also makes the contract tough to buyout down the line. For example if they tried to buy him out in the summer of 2022 when he was 36, they’d only save around $1.4MM off the cap for the 2022-23 season.

Not surprisingly, Oshie turned in the best offensive season of his career (on a goal-scoring and per-game rate at least) while playing with Alex Ovechkin and Nicklas Backstrom. Oshie rode a ridiculous 23.1% shooting percentage to 33 goals in 68 games and was one of the team’s best players in the playoffs. While that is expected to regress somewhat, Oshie does seem like a perfect fit for Backstrom as a go-to-all-areas winger who can bury from in tight or off the rush. It wouldn’t be surprising to see him set a career-high in points next year, as he missed 24 games due to injury and still came just four points shy of his high-water mark.

The effect a $5.75MM hit has on the Caps salary structure is palatable for now, as they will still have ~$19MM to re-sign their group of important restricted free agents. Evgeny Kuznetsov, Andre Burakovsky, Dmitry Orlov, Brett Connolly and Philipp Grubauer all need contracts, and that should eat that entire nugget if not more. Nate Schmidt, who they lost to Vegas in the expansion draft also would have needed a new contract, which they may not have been able to afford.

The free agent market just got even smaller, as Oshie figured to be one of the top-3 names on the board come July 1st. With Alexander Radulov remaining as the only real elite option at forward, his camp was just handed even more leverage in their talks with the Montreal Canadiens. Radulov is just over six months older than Oshie, and though he obviously doesn’t have as long of a track record in the NHL should still be able to argue he deserves at least five years. Whether he’d settle for the $5.75MM number that Oshie brought down is still unclear, but a $46MM deal handed out on draft day is a big win for the Radulov camp.