The Winnipeg Jets can mark off one item on their offseason to-do list, as the team has signed Marko Dano to a one-year contract. The contract is one-way, and worth $850K for the 2017-18 season. Getting him under contract gives the Jets more options for the expansion draft, as he could be exposed as one of their two forwards who meets the games played minimums. 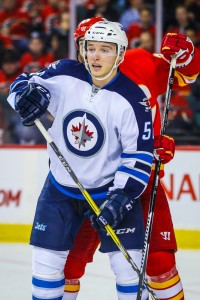 As discussed in the Jets’ Expansion Primer, the team is in a tough spot should Toby Enstrom not waive his no-movement clause. We won’t find out if he did or not until the protection lists are released, but if he didn’t there are going to be handful of interesting players available for the Golden Knights. Dano may not be the top name, but he’s definitely one of them after flashing some of the potential that made him a first-round pick just a few years ago.

Dano was acquired by the Jets along with a first-round pick—which the team used to trade up and select Logan Stanley—for Andrew Ladd last year, and is a promising young player in his own right. The 22-year old was actually drafted by the Columbus Blue Jackets before being shipped off to Chicago as part of the Brandon Saad deal. Selected as a center, he hasn’t played much down the middle in the NHL.

Now playing on a one-way contract, Dano is expected to spend most of the year with the Jets this season as a bottom-six winger with the potential to develop into a more offensive player. His speed and defensive game is good enough to play limited minutes, but if he’s to take the next step he needs to break through offensively. Even in the AHL he’s rarely found sustained success, something he’ll look for in Winnipeg as he turns 23.