Another minor league hockey player has decided to take his talents overseas, as Chris Terry has signed with Torpedo Nizhny Novgorod of the KHL. Terry spent the last two seasons with the Grand Rapids Griffins of the AHL, where he has been one of the league’s most consistent scoring threats for some time.

Now 31, Terry was originally selected in the fifth round of the 2007 draft by the Carolina Hurricanes and after some outstanding performances in the OHL, jumped into the professional ranks and never looked back. In his rookie season with the Albany River Rats in 2009-10, he scored 17 goals and 47 points, a sign of what was to come over the next decade. Since then, Terry has posted seasons of 64, 59, 60, 69, 68, 71, 61, and 51 points in the AHL, consistently appearing in the league’s All-Star Game and on the leaderboards. He has received somewhat sporadic opportunities in the NHL, suiting up for 152 games over the years and recording 38 points.

With his latest contract expiring and jobs being tough to come by in North America, Terry will continue his hockey journey in the KHL. It seems likely that the minor league weapon will find success overseas, using his excellent hockey sense and finishing ability to add some scoring to the Torpedo lineup.

Sunday: More changes are being made, even on the morning of the event. Toronto Marlies teamates Timothy Liljegren and Jeremy Bracco have been added to the North Division squad, the AHL announced. The duo will replace Bellevile Senators forward Drake Batherson, who was recalled by Ottawa, and Utica Comets forward Reid Boucher, who is unavailable due to an injury suffered this weekend.

Saturday: The AHL announced another change to the AHL All-Star roster as Belleville Senators forward Alex Formenton will replace teammate Josh Norris for the North Division.

Wednesday: The league has made another adjustment, selecting Cameron Gaunce from the Syracuse Crunch to replace Lawrence Pilut of the Rochester Americans. Pilut’s absence likely means he’ll be re-joining the Buffalo Sabres after the break.

Tuesday: The AHL All-Star Game is also just around the corner, but thanks to some midseason call-ups the rosters will have to change. Today the minor league announced five swaps for their upcoming event in Ontario, California. Vinni Lettieri (Hartford), Josh Norris (Belleville), Adam Clendening (Cleveland), Alex Nedeljkovic (Charlotte) and Vitek Vanacek (Hershey) have all been added to the game, while Nathan Gerbe (Cleveland), Michael Sgarbossa (Hershey), Rasmus Sandin (Toronto), Chris Driedger (Springfield) and Igor Shesterkin (Hartford) will all no longer be attending.

The full rosters are now as follows:

Just like the NHL did recently, the AHL has now announced their All-Star rosters for the upcoming festivities. The minor league will hold their annual showcase in Ontario, California, hosted by the Los Angeles Kings’ affiliate. 33 of the players announced are AHL All-Stars for the first time, including several top prospects around the league.

Jordan Szwarz, Christian Wolanin, Nathan Gerbe and Cooper Marody have all been added, given the lack of availability for Ryan Fitzgerald, Lawrence Pilut, Zac Dalpe and Conor Garland. Wolanin was just sent down by the Ottawa Senators today, just in time to play in the AHL even that takes place on Sunday and Monday. The full rosters now sit as follows:

While the NHL announced their All-Star rosters this week to the ire of some fans, there are other professional hockey players suiting up in a mid-season exhibition this year. The AHL has released their own All-Star rosters, which include both veteran minor league players and prospects still getting their feet wet at the professional level.

The full rosters are below:

With the NHL season now less than a week away, we continue our look at what each team has done this summer and what to watch for in the year to come. Next up is a look at the Detroit Red Wings.

Player To Watch: F Dylan Larkin — The Red Wings finally have the star player they have been looking for after the 22-year-old posted a career-high 63 points last season and could be poised to take that next step this year after signing a five year, $30.5MM contract over the summer. A couple things that could fall in his favor are the fact that Larkin had a low shooting percentage last season, which should improve, while he also saw little power play time, which will obviously change this season. 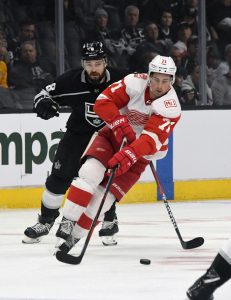 The best case scenario for Larkin would be to take his game up another notch and perhaps reach the point-per-game plateau, which he is more than capable of. A worst-case scenario might see him struggle to stand out amongst a stable of improving, but hardly amazing crop of forwards. The team can only hope that Larkin can prove he was worth the contract he received and can help lead Detroit move up in the standings. His elite speed makes him one of the best to enter the offensive zone with the puck on his stick, but he must prove that he can put the puck away as well.

Key Storyline: The youth movement is truly beginning this year as several young players look to have legitimate chances to make the roster, including 2017 first-rounder Michael Rasmussen and 2018 first-rounder Filip Zadina. While there has been no guarantee they will make the NHL roster, both have shown their offensive talents off and even if Zadina gets sent down, the 18-year-old can play in the AHL instead. Regardless, a team that was (and still is) an older, veteran team is starting to change its look.

The team is also expected to make some changes on the defensive end of the ice as several young defensemen are challenging for an NHL roster spot, including Filip Hronek, Joe Hicketts, Dennis Cholowski and Libor Sulak. The goal is the team should slowly build its way to a young, rebuilt roster.

Overall Outlook: The Red Wings are in a tough transition phase that should keep them near the bottom of the NHL for another season and perhaps give them a shot at consensus No. 1 overall pick Jack Hughes next season. With so many aging players that are clogging up their cap, the best fans of the franchise can do is hope that their young players develop as fast as they can to give the team a hope for the future.

A substantial group of players again went untouched on the waiver wire yesterday, as there remains just one claim so far this season. Today, a new set of names become briefly available on their way down to the AHL. According to The Athletic’s James Mirtle, these 18 players have been placed on waivers by their respective teams today, highlighted by Ottawa’s longest-tenured player:

Obviously, Smith is the star of this group and easily the biggest name to hit the wire so far this year. The decision to placed the veteran forward, a career Senator entering his eleventh season, on waivers is a curious one. Admittedly, Smith did not play well last season; beyond only recording 19 points in 68 games, he logged a brutal -32 rating, saw a drop-off in face-off success, and struggled in many possession metrics. Nevertheless, he remained a favorite of head coach Guy Boucher and saw a career high in ice time. After losing the likes of Erik Karlsson and Mike Hoffman this summer, Smith – while not the strongest player – was one of the few loyal locker room leaders left in Ottawa. There has already been a negative response, as Matt Duchene called the move “a kick in the balls” for the locker room, according to TSN’s Brent Wallace. For some reason, the team has decided to move on, one way or another. TSN’s Darren Dreger reports that the Senators have been shopping Smith for some time and had trade interest, but were not able to come to an agreement with any of the teams not included on Smith’s limited list per his modified No-Trade Clause. Now, they will either lose him for nothing in return or have the ability to bury him in the minors if he clears. Such a demotion would clear $1.025MM in cap space of his $3.25MM salary. It is important to note when considering any potential claims, that Smith is signed for three more years, making his inclusion on waivers even more surprising.

The group of Canadiens could also offer some appeal, particularly the 23-year-old power forward McCarron. Although the 2013 first-round pick has not lived up to expectations yet, he has the one thing you can’t teach and that is size. At 6’6″, 230-lbs., McCarron has the frame to do some damage at his spot on the right wing if put in the right system with the right line mates. It hasn’t happened yet in Montreal, but some other team may be willing to take a shot. Veteran grinder Froese, who played in 48 games with the Habs last year, could also get a passing glance, while trade recent Montreal trade acquisitions Shinkaruk and Valiev are somewhat intriguing albeit not likely to be claimed.

Team in search of young, affordable fourth line help could look at the Bruins’ Blidh and Cave, although such a move is unlikely. The same goes for Haggerty, whose placement on waivers comes as surprise, given that no contract has of yet been announced with Pittsburgh for the Wilkes-Barre/Scranton Penguin.

The Detroit Red Wings have announced another set of signings today, adding minor league depth in the form of forwards Chris Terry and Wade Megan, defenseman Jake Chelios and goaltender Harri Sateri. Terry has signed a two-year deal, while Megan, Chelios and Sateri have signed on for one year. Salary terms have not yet been disclosed.

Detroit is expected to graduate several players from the Grand Rapids Griffins this season, and needed some veteran additions to keep the minor league team competitive. Terry especially will be a huge boost to the offense, after his 71-point 2017-18 with the Laval Rocket. That was on the worst team in the AHL, something that the Griffins don’t project to be this season.

Sateri, fresh off his NHL debut in Florida, will provide some more goaltending depth for the Red Wings as well. Though they now have Jimmy Howard and Jonathan Bernier at the NHL level, Jared Coreau left the organization and they needed some more experience in the minor leagues. He’ll fight for the full-time starter role there, and try to work his way back up to the NHL should any injuries arise.

After announcing their All-Rookie team earlier this week, the AHL have now given us their choices for the first and second All-Star Teams for 2017-18. These players were voted in by coaches, players and media all across the league.

*Niku and Appleton were also named as part of the All-Rookie team.

Of course, much of the fanfare will go to Niku and Appleton who were not only rookies but late-round draft choices. Their appearance on the list is so impressive, especially given the success of the Jets already graduated young core. With a pipeline of talent, Winnipeg should have a wide open window of contention.

Probably the most interesting name though is Hutchinson, as he’ll be an unrestricted free agent at the end of the year. One has to wonder if he’ll get a crack at an NHL job, given his outstanding minor league season and reliatively successful experience at the highest level. He’s making $1.3MM this season, but could look for a larger opportunity elsewhere while Connor Hellebuyck, Steve Mason and Eric Comrie man the crease in Winnipeg.

The last Friday before the season begins, and just a few more days until teams have to submit their final rosters. As we head into the final few preseason contests, some teams are still holding onto a huge roster. The waiver wire is sure to be filled over the next few days as teams make their final cuts. As always, we’ll have all the movement right here throughout the day.