We’ve now made it past the holiday season but there is still plenty to be thankful. Like the last few years, PHR will take a look at what teams are thankful for but this year comes with a bit of a change. Normally teams would have an idea of where their season was heading, coming up on the one-quarter mark with mountains of statistics to analyze. Instead, in this unprecedented year, things are just getting underway. We’ll still take a look at what each group is excited about and what they could hope for with the calendar having now flipped to 2021.

A group of young impact players changing the look of the team.

It’s taken a few years, but the team is suddenly loaded with young talent that is contributing in a major way for the team. Just a few years ago, the team brought in players like Travis Konecny, Ivan Provorov, Travis Sanheim and  goaltender Carter Hart to name a few. Those players have established themselves as elite players on a playoff team that is hoping to now take that next step. Other younger players have more recently stepped in as well, including Joel Farabee, Morgan Frost, Philippe Myers, etc. The hope is the next wave can also take the next step.

The team may have quite a few young players they can count on for support, but the team continues to be held together by their veteran depth. The team still has their top three long-time forwards, Sean Courturier (the 2020 Selke winner), Jacob Voracek and Claude Giroux, but have also gotten great contributions from Kevin Hayes, who has looked outstanding in his one-plus year with the team, even posting eight points in six games with the team so far this year. Even James van Riemsdyk has posted solid numbers this season, giving the offense a solid core presence. 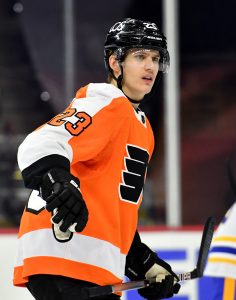 The Flyers lost a pair of impressive young players for the season last year. Lindblom was diagnosed with Ewing’s Sarcoma, a form of cancer and spent the season receiving treatment. He was cleared of the cancer late in the year and even made the trip with the team into the playoff bubble, although he didn’t play. Regardless, now healthy, the team hopes that Lindblom can pick up where he left off, which was producing at a high level. So far, he has spent quite a bit of time on the first line.

Patrick, on the other hand, missed the entire 2019-20 season due to concussion issues with plenty of questions on whether he would be back when the season started. However, Patrick is back, centering the third line and looking sharp, perhaps sharper than he has ever played before, giving hope to the Flyers future.

The loss of Matt Niskanen has had quite an impact. The veteran blue liner announced his retirement during the offseason, something the team hadn’t planned on. The Flyers did go out and re-sign veteran Justin Braun, but the team has put a lot of pressure on their young defense this year and it has showed so far. The team could really use a veteran, perhaps at the trade deadline, to bolster their defense if they want to make any type of run in a shortened season and in a challenging division this year.

Morgan Frost of the Philadelphia Flyers has suffered a dislocated left shoulder and is out indefinitely. The young forward has been placed on injured reserve. Philippe Myers, who was also forced from action recently, has suffered a fractured rib and is considered week-to-week. One of the only reasons Frost had even been playing was because of an injury to Sean Couturier, who hasn’t played since last Friday.

It’s important to remember that missing even a few weeks can mean up to a quarter of the season in this condensed schedule. Should Couturier be able to return soon, the absence of Frost may not be that noticeable, but Myers was and will continue to be a huge loss. Even with very little NHL experience, the 23-year-old defenseman was given a three-year, $7.65MM contract this winter and was expected to be a key part of the Flyers back end.

Frost meanwhile is just trying to get his foot in the door, after spending most of last season with the Lehigh Valley Phantoms. The 21-year-old forward was a first-round pick in 2017 and has just 22 NHL games to his name so far. His best opportunity to prove his value may have been while Couturier was out, but now he’ll miss a huge chunk of the season himself.

The Flyers are back in action this evening against the Boston Bruins as they look to maintain their lead in the East Division.

Although his entry-level contract expires after this season, Brady Tkachuk and the Ottawa Senators are not rushing into contract talks. Tkachuk spoke with the media on Wednesday, including The Ottawa Sun’s Ken Warren, and stated that he was happy with the club and not worried about negotiating an extension. “We’re not really talking about (a new contract),” Tkachuk said, “I don’t think that’s the focus for both sides. Our goal right now is to do everything we can to make the playoffs.” Neither side really has much to worry about anyhow. Tkachuk has continually stated that he enjoys playing for the team and living in Ottawa and seems committed to a long-term future with the Senators. And with more than $34MM in projected cap space for next season and few existing long-term contracts to worry about, the club should have no problem giving their young centerpiece whatever he wants in order to ensure a lengthy extension of their relationship.

The NHL season is underway and at the top level teams are keeping busy merely by swapping players between the active roster and taxi squad. However, with AHL training camps starting up, there has also been a flurry of activity from the lower levels. There also continue to be players making the move overseas, by both signing and loan. Keep up with all of the action right here:

It appears as though there will be daily movement this season between the active roster and taxi squad this season. Although some major names may be highlighted in separate articles, this is where you’ll find the majority of shuffle news each day.

This page will be updated throughout the day.

The Boston Bruins will be without one of their top wingers as head coach Bruce Cassidy said that Ondrej Kase is doubtful for Monday’s game against the New York Islanders with an upper-body injury, according to Boston Hockey Now’s Joe Haggerty.

Kase took a high hit against the boards from New Jersey’s Miles Wood during the second period of Saturday’s game. Already with a history of concussions, the forward skated off the ice on his own, but was holding his face.

On a positive note, winger Craig Smith, out with a lower-body injury, is likely to be available on Monday. Smith did make his debut on Saturday, playing 17:07 of ice time and should find himself on the second line. Jake Debrusk is expected to move over to the right side and fill in on the team’s first line as well.