The Edmonton Oilers have inked forward Jujhar Khaira to a two-year extension. Khaira was set to become a restricted free agent this summer, but will now be under contract until the summer of 2019. The deal will pay him $675K per season. 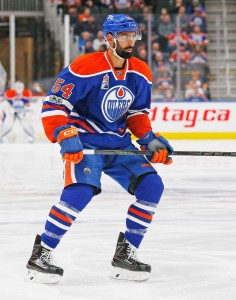 Just ten days ago we looked at the expansion situation for Edmonton, in which our own Brett Barrett (in what would unfortunately be his last post for us here at PHR; he’s off to bigger and better things at Global News in Edmonton, give him a follow here) discussed the possibility of protection slot being used on the young forward. Khaira was selected in the third round of the 2012 draft and has shown the potential to develop into a checking center in the NHL. While the decision between him and Mark Letestu is still a difficult one, getting him under contract for such a low number for a couple of years may make him even more attractive.

The 6’4″ 220-lbs center played just 10 games for the Oilers this season, scoring his first NHL goal but nothing else. He was more effective in the AHL with 20 points in 27 games, but it was an injury that dominated the headlines of his 2016-17 season. He’ll try to get back on track next year and fight for an NHL role, should he make it through the expansion process unscathed. Even though he hasn’t done much in the NHL as of yet, at just 22 he could grow with the Golden Knights and give them some depth down the middle, a position that will be extremely difficult to fill.

Elliotte Friedman of Sportsnet reported the financials of the deal.