As we inch closer to July 1st and free agent frenzy opening up, another interesting name has been taking off the market. Derek Ryan has re-signed with the Carolina Hurricanes, inking a one-year contract that will pay him $1.425MM in 2017-18. 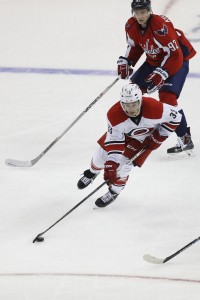 Ryan, 30, is one of the rare examples of a player breaking into the NHL after years and years struggling to find professional work. Undrafted out of the WHL, Ryan headed for the University of Alberta, playing in the Canadian Intercollegiate Sports (CIS) league, one not considered an option for professional prospects. After graduating, he took his game overseas and joined the top Austrian league, dominating as an offensive dynamo for three seasons.

After being given a chance in the Swedish Hockey League (SHL) in 2014-15, and coming away with 60 points in 55 games, the Hurricanes gave him a chance and signed him to a one-year two-way contract. Again Ryan showed his offensive chops, easily leading the Charlotte Checkers in scoring and even getting into six games in the NHL. This past year, Ryan became a full-time player for Carolina and registered 29 points in 63 games.

Against all odds and overlooked for perhaps his entire career, Ryan will play on the first one-way NHL contract of his life next season. The 5’11” forward would have been a sneaky-good offensive pickup for any team looking to add secondary scoring, but he’ll remain with the only team to ever give him a chance. Turning 31 in December, he’ll command even more leverage next season if he can prove that his offensive ability can be a consistent plus for an NHL team on a nightly basis.

Frank Seravalli of TSN was first to break the contract on Twitter.