It’s been a busy day for news at the NHL level, with unfortunately a high number of COVID protocol placements over the past few days. It’s caused a ripple effect across leagues, with teams making rapid roster transactions in order to keep up. Here’s a list of today’s minor transactions across the hockey world:

The Florida Panthers lost Friday night against the Washington Capitals in part because of an Alex Ovechkin hat trick, but they went into the game down one of their best forwards after winger Anthony Duclair was unexpectedly pulled from warmups and scratched.

Now, interim head coach Andrew Brunette says Duclair is day-to-day with a lower-body injury. Speaking after the game, Brunette called the scratch “unexpected,” and that he was mostly pulled as a precaution. However, he does say that Duclair will be evaluated in the coming days.

Maxim Mamin, who has a goal in four games this season, filled in on a line with Jonathan Huberdeau and Sam Bennett in Duclair’s absence.

Duclair was finally rewarded with some stability this offseason when the Panthers gave him a three-year, $9MM contract extension this offseason. He’s lit up the scoresheet this season, posting 17 points in 19 games en route to an extremely hot start for the Panthers.

11/26: The Panthers have officially announced the new deal, confirming a two-year pact with Lomberg. In the team’s release, GM Bill Zito stated his appreciation for the forward’s hard-working brand of hockey: “Ryan has brought physicality and contagious energy to our lineup. We are excited to announce that he will continue to be a part of the Panthers organization for years to come.”

11/25: Ryan Lomberg has been a capable depth player in his two seasons with the Panthers and the team clearly likes what he has provided as CapFriendly reports (Twitter link) that they’ve signed the winger to a two-year contract extension.  The deal is worth $775K in 2022-23 and $825K in 2023-24 for an AAV of $800K, a small raise on his current $725K cap hit.

Since joining the Panthers, Lomberg has become more of a regular player, suiting up in 34 games last season where he tallied two goals and two assists in 34 games along with a team-high 67 penalty minutes.  This season, he has played in ten contests, picking up a goal and two assists while logging 10:38 per game, a career-high in ATOI.

With the signing, Florida now has just under $78MM in commitments for next season to just 16 players, per CapFriendly.  With the cap only expected to go up by $1MM next season to $82.5MM, Florida is going to be facing a situation where they will need to round out their roster with minimum-salary players and will likely need to move someone out to free up enough money to re-sign some of their own pending free agents.  Accordingly, getting a regular player in Lomberg locked up for just under the minimum is a nice piece of business for GM Bill Zito.

Thornton was placed on injured reserve on October 30 with an undisclosed injury. The night before, ’Jumbo’ played just 6:34 before leaving a game against the Detroit Red Wings.

In just six games this season, the 42-year-old Thornton’s got just one goal and a -2 rating but is still averaging over 10 minutes a night. Some added depth at center is a good thing for Florida right now, who is now without captain Aleksander Barkov on a week-to-week basis after sustaining a knee injury.

Expected to center the third line for the game against the Devils, he’ll be flanked by Frank Vatrano and Owen Tippett who’ve played well in depth roles, combining for seven goals and 14 points so far on the year. With the Panthers’ health issues, though, the lineups could certainly be in flux over the next few games.

Thornton joined the Panthers this offseason, signing a one-year, league-minimum deal on August 13.

When Aleksander Barkov collided with Scott Mayfield last night, leaving him sprawled out on the ice with obvious pain on his face, Florida Panthers fans held their breath. The captain was taken from the game and many feared the worst, but it appears as though there is some good news. 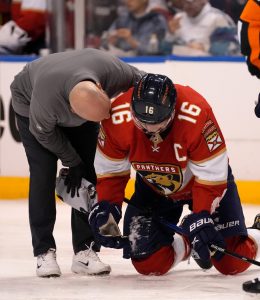 Barkov will not require surgery, according to head coach Andrew Brunette, who spoke with reporters including George Richards of Florida Hockey Now. He will still be out on a week-to-week basis, but Brunette called it a “best-case scenario.”

It’s certainly not ideal to have your captain on the shelf for weeks, but the fact that Barkov won’t go under the knife is a huge win for the Panthers. The team looks like a legitimate Stanley Cup contender through the early part of the season and showed their explosive offense off again last night, potting six goals against the usually-stingy Islanders.

In fact, the Panthers lead the entire league in goals for with 62 through their first 16 games and still have a two-point lead on the Toronto Maple Leafs for first place in the Atlantic Division.

They also have several players with experience at the center ice position, including Sam Bennett, Sam Reinhart, and Joe Thornton, the latter of which was skating in the third-line pivot spot at practice today as he recovers from his own injury.

There’s a six-game slate in the NHL tonight on this Hall of Fame weekend, but transaction action keeps rolling along at lower levels of the game as well. As COVID rears its ugly head again, affecting the rosters of multiple teams this season, teams in the AHL and ECHL have had to adjust their rosters as they lose players to their NHL affiliates. Keep track of today’s minor transactions right here.

While Philadelphia Flyers forward Kevin Hayes is eligible to come off long-term injured reserve for Philadelphia’s game on Wednesday against the Toronto Maple Leafs, it sounds like the forward isn’t quite ready to return from an injury that’s kept him out all season up until this point. Head coach Alain Vigneault won’t rule it out but says that “Wednesday is an outside chance, more on the outside than on the inside” in terms of Hayes’ availability. If Hayes does return, it will be ahead of schedule. He was expected to miss roughly two months after being placed on injured reserve in late September as he continued to recover from offseason core muscle surgery.

Other injury notes from around the NHL: