It’s time for the hometown kid to get another chance. Marc McLaughlin has been recalled by the Boston Bruins, after some strong play in the minor leagues.

McLaughlin, 23, was signed last season as an undrafted NCAA free agent after captaining Boston College and suiting up at the Olympics for Team USA. The North Billerica native played in 11 games down the stretch for the Bruins, scoring his first three NHL goals in the process.

This year, he’s been with the Providence Bruins for the entire season, recording seven goals and 17 points in 39 games. Seven of those points have come in the last five games, as his game has hit a new level of late.

Boston is hitting the road for five straight, starting in Montreal tomorrow night before stopping to play Tampa Bay, Florida, Carolina, and Toronto before the All-Star break. Having another forward was necessary for the long road trip, meaning McLaughlin’s strong play came at the perfect time.

Load management is a term that has become more commonplace in the NBA in recent seasons but it’s not something that’s typically done with any sort of regularity in the NHL.  However, that could be changing as Bruins center Patrice Bergeron acknowledged to ESPN’s Greg Wyshynski that the team has talked to him about the possibility of selectively resting him down the stretch.  The 37-year-old is in the midst of another strong season and has 36 points in 45 games so far while anchoring their top line but at his age and the minutes he has logged over the years, a night off here and there might not be a bad idea.  Of course, it certainly helps that Boston has a 13-point lead on Toronto in the Atlantic Division, giving them a sizable cushion that lessens any risk from attempting to give their top center some extra rest.

The Bruins will be without a key depth veteran for the next little while as the team announced that center Tomas Nosek suffered a non-displaced fracture in his left foot on Thursday night.  He will miss at least the next four weeks due to the injury and will be re-evaluated at that time.

The 30-year-old is in his second season with Boston after signing a two-year, $3.5MM deal with them last summer.  Nosek is one of their most-used penalty killers, ranking second to only Charlie Coyle in shorthanded ice time among forwards while he has won over 58% of his faceoffs, good for second on the team behind Patrice Bergeron.  Offensively, he has chipped in with three goals and five assists in 42 games but his biggest contributions certainly come at the defensive end.

Notably, this injury dropped the Bruins down to 11 healthy forwards on their active roster so a recall from AHL Providence was expected.  While not announced by the team yet, they have recalled forward Joona Koppanen, per the AHL’s transactions log.  While they have next to no cap space, they do have plenty of flexibility in LTIR with Jake DeBrusk and his $4MM AAV on there while Nosek is eligible to be moved to LTIR as well considering how long he is set to miss and Koppanen’s recall will trim that space.

The Boston Bruins have announced that defenseman Brandon Carlo has suffered a lower-body injury, and is unlikely to return to tonight’s game against the New York Rangers. Carlo, a 26-year-old stay-at-home defenseman, is no stranger to injury issues, although this one is thankfully of the lower-body variety. While no injury is ever good news for a player, Carlo has battled concussions during his tenure as a Bruin, meaning the fact that this injury isn’t adding to that history is worth being thankful for.

Carlo blocked a hard shot from New York Rangers forward Mika Zibanejad in the second period of tonight’s game, and it’s likely that this injury has something to do with that block. The Bruins will hope that Carlo leaving tonight’s game proves to be an ultimately unnecessary precaution, as Carlo has been an important part of the team’s defensive formula and they’re likely to want him back on the ice as soon as he’s able.

Jan 17: After Koppanen joined Wagner in the minor leagues for a few days in between, the big forward is back up with the Bruins. He’ll head out on the road with them as they prepare to face the New York Islanders and New York Rangers in a back-to-back this week.

Jan 11: The Boston Bruins have swapped a pair of depth forwards, sending Chris Wagner back to the AHL and recalling Joona Koppanen in his place. This is Koppanen’s first recall of the season.

The 24-year-old winger has never appeared in an NHL game, playing exclusively with the Providence Bruins the last two seasons. A fifth-round pick from 2016, Koppanen is on a one-year, two-way contract that he signed last summer to stay in the organization.

Though he stands 6’5″ and towers over most of his opponents, Koppanen is not overly physical and instead uses his long reach as a tool defensively, especially on the penalty kill. Interestingly enough, Mark Divver of NHL.com tweeted yesterday that Koppanen had a bit of a “disagreement” with teammate Connor Carrick at practice. Divver followed up today with some words from the Providence coaching staff, saying that the big forward had been “unbelievable” and “absolutely outstanding” in the last few games.

While he technically received a Black Aces call-up last season, this is really Koppanen’s first chance at the NHL level. Wagner played just over 12 and a half minutes on Sunday in his only appearance of the season. If Koppanen takes that role tomorrow against the Seattle Kraken, it will be his NHL debut.

The Boston Bruins have had a dream start to their Jim Montgomery era. After hiring their newest coach in the offseason, the Bruins have stormed out the gates in 2022-23 to rank first in the NHL with an extremely impressive 33-5-4 record. A major reason for Boston’s success has been the play of David Pastrnak, who is up to 33 goals and 59 points in 42 games on the season. But what does cloud the Bruins’ future is the upcoming unrestricted free agency of Pastrnak, whose contract expires in the summer.

According to Elliotte Friedman of Sportsnet, the Bruins are trying to prevent reaching that point. Friedman reported yesterday on Sportsnet’s Hockey Night in Canada broadcast that the Bruins were making “progress” on a new deal with Pastrnak. The Bruins signed Pastrnak’s countryman Pavel Zacha to an extension last night, and are seemingly hard at work on a new deal with their star forward, who will undoubtedly earn a major raise from his current $6.66MM cap hit.

As soon as they put the finishing touches on a statement win over the Toronto Maple Leafs, the Boston Bruins announced a contract extension for Pavel Zacha. The four-year deal will carry a cap hit of $4.75MM and keeps Zacha under contract through 2026-27. 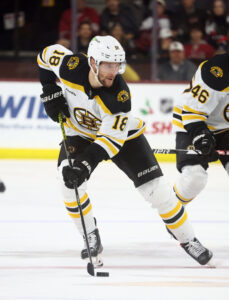 Zacha, 25, was acquired from the New Jersey Devils in an offseason trade last summer and agreed to a one-year, $3.5MM deal as an RFA. That would have walked him right to unrestricted free agency at the end of the season, and after a great performance so far, earned a serious extension.

The defensive forward has fit in nicely for the stingy Bruins, adding 25 points in 41 games. That has him on pace to set a new career-high (his previous is just 36), though only five of them are goals.

His scoring talents have become secondary over the years though, as Zacha refined his defensive game more and more. He can now be deployed on any line, at any point in the game, and help tilt the ice in the Bruins favor.

While it is certainly no guarantee that continues, the Boston front office must believe he can be a core piece moving forward. The Bruins have a massive contract negotiation still pending with David Pastrnak, which will eat up a ton of cap space moving forward.

Luckily, there’s plenty of money coming off the books even with Zacha signed. Nick Foligno, Craig Smith, Tomas Nosek, Chris Wagner, Anton Stralman, and Connor Clifton are all pending UFAs, not to mention Patrice Bergeron and David Krejci who are going year-to-year at this point.

With Zacha in place, the team still has more than $20MM to work with as they try to rebuild the roster for next season.

The fan vote for the final player selections is still ongoing, but the NHL has finalized who will be behind the bench at the 2023 All-Star Game in Florida next month. Carolina Hurricanes head coach Rod Brind’Amour will be leading the Metropolitan, Boston Bruins bench boss Jim Montgomery leads the Atlantic, Peter DeBoer of the Dallas Stars will be running the Central, and Bruce Cassidy of the Vegas Golden Knights will be steering the Pacific.

The Hurricanes, Bruins, Stars, and Golden Knights currently lead their respective divisions, though it’s a close race in three of them. Only the Bruins have a substantial lead, with their 32-4-4 record pacing the entire NHL.

Interestingly enough, three of the four coaches named were involved in something of an employment carousel this offseason. Cassidy was fired by Boston and eventually took the job in Vegas after they dismissed DeBoer. DeBoer took a job in Dallas, one that had only been filled by Rick Bowness after Montgomery’s dismissal in 2020. Montgomery in turn took over in Boston, which gave him another chance as an NHL head coach.

Brind’Amour is the tenured professor of the bunch, taking over as head coach of the Hurricanes in 2018. He won the Jack Adams in 2021, and has an overall record of 199-95-35, plus four playoff series wins. It’s been an impressive transition from player to assistant to head coach for Brind’Amour, who basically never stopped working for the Hurricanes after arriving in 2000. He is reprising his role as head coach of the Metro, after being their last season.

The selections show just how quickly the NHL coaching wheel turns, with Cassidy and DeBoer both appearing at this game with their previous teams. DeBoer has actually gone with three in a row, appearing as the head coach of the Pacific in 2017 with the Sharks as well.

The final player selections will be announced on January 19, and the skills competition kicks off February 3.

According to a league release, the NHL has named the first eight selections to the four divisional All-Star teams for the 2023 NHL All-Star Game in Sunrise, Florida.

The league names one player to represent each team at the game, a rule in standing since the league switched to a divisional format for its mid-season talent showcase. A public fan vote will decide the three remaining players per division next week.

Each division’s leader in points percentage after gameplay concludes on January 11 will determine coaches for these teams. The Boston Bruins have already clinched the best such number in the Atlantic at that time, meaning Jim Montgomery will be behind the bench for the star-studded Atlantic Division, arguably the league’s best contingent of talent.

The initial rosters for each division are as follows:

The most important note on these rosters is obviously that of Tarasenko’s status. The 31-year-old is on injured reserve with a hand injury, and likely won’t be able to suit up. His replacement will be named shortly.