The Tampa Bay Lightning have placed forward Rudolfs Balcers on waivers, according to CapFriendly. The move comes after Balcers finished his conditioning loan to the Lightning’s AHL affiliate, the Syracuse Crunch, today.

Balcers, 25, hasn’t played in an NHL game since November as he was dealing with an upper-body injury. This is not his first time on waivers this season, as he was claimed off of waivers by the Lightning in November.

Balcers’ injury means that he has only played in three games for the Lightning, despite being on their roster for quite a bit of time. In those three games, Balcers scored a goal and averaged just under seven minutes of ice time per game. His full-season total production is five points through 17 games, which is a decline from the rate he scored last year.

If he ends up clearing waivers, Balcers will head back to the AHL level in Syracuse where he’s had success. Balcers has 117 points in 149 career AHL games, so he should be able to help the Crunch’s scoring attack should he end up there.

Otherwise, teams across the league will have a chance to reinforce their group of forwards with Balcers should they want to place a claim. Balcers is available at a league-minimum price, and has 170 NHL games on his resume.

The Tampa Bay Lightning and Luke Schenn had a nice time together. Two years, two Stanley Cup championships. Then they parted ways, with one choosing security and proximity to family. Now it seems that they might want to rekindle an old fling. The Lightning have shown interest in re-acquiring Schenn from the Vancouver Canucks, according to Elliotte Friedman of Sportsnet.

Schenn, 33, won back-to-back championships with the Lightning before signing a two-year deal with the Vancouver canucks in 2021. That contract is about to expire, and the physical depth defender has drawn some interest from all over the league as the perfect deadline addition.

He’s relatively cheap, costing just $850K against the cap, right-handed, and has 15 years of experience in the NHL. He’s also in the midst of his best per-game offensive season, with 14 points in 43 games so far in Vancouver.

Schenn has over 200 hits already this season, easily leading the league. While that isn’t always indicative of success (the other team has to have the puck for you to deliver a hit), it may be exactly what the Lightning are after.

Friedman notes that they are also looking for “a forward with an edge.” They’ve targeted players like Blake Coleman, Barclay Goodrow, and Nick Paul in the past to great success.

The Lightning won’t be the only team considering Schenn, but if they are set on him, they’ve shown a willingness to pay whatever it takes at the deadline. Tampa Bay is focused on championships, and has enough faith in their scouting and development system to move high draft picks. Schenn shouldn’t cost a first-rounder or anything, but he’ll be a nice chip for the Canucks as the deadline nears.

The Tampa Bay Lightning assigned forward Rudolfs Balcers to the AHL’s Syracuse Crunch today on a conditioning stint, according to a team release.

The move signifies Balcers could be close to returning from an upper-body injury that has kept him out of the lineup since Thanksgiving. Claimed on waivers earlier in the season from their intrastate rival Florida Panthers, Balcers has suited up just three times for his new team.

It has been a very tough go of things for Balcers in 2022-23. He was somewhat of a surprise free agent, left unqualified by the San Jose Sharks after a respectable 23 points in 61 games last season. Florida picked Balcers up but then waived him after he scored twice in 14 games. He’s added one goal in his three Lightning appearances.

This figures to be Balcers’ first AHL action since 2019-20 as a member of the Ottawa Senators organization. He scored 36 goals in 33 games with AHL Belleville, and he’ll hope to keep up strong numbers in a short stint with Syracuse to show the Lightning he’s still ready for NHL action.

It seems as though Minnesota Wild defenseman Matt Dumba has been on the trade block for years on end. Now, rumors are once again starting to build up regarding the 2012 seventh overall pick. TSN’s Darren Dreger reported on today’s edition of Insider Trading that both the Ottawa Senators and Edmonton Oilers have shown interest in Dumba, who is a pending unrestricted free agent.

Both teams still have playoff aspirations, desperately trying to add defensive depth. Dumba’s offensive production has taken a step back this season, as he’s recorded just 11 points in 39 games. It’s a far cry from his 50-point campaign in 2017-18, as injuries have mounted up.

Ottawa seems to have a larger hole of the two teams mentioned on the right side, but they do sit further out of playoff positioning than the Oilers. With Minnesota solidly in playoff positioning, they would undoubtedly be looking for roster players in return for the 28-year-old Dumba.

The Tampa Bay Lightning continue to turn late-round picks into valuable players, this time getting regular minutes out of sixth-round rookie Nick Perbix. They’ve rewarded the young defenseman with a two-year extension, which will carry an average annual value of $1.125MM.

Perbix, 24, was the 169th pick in 2017, coming out of the high school circuit. There was some early optimism during his year in the USHL but things didn’t really start taking off until he went to St. Cloud State. Over four years, Perbix racked up points while playing in all situations. He performed so well that in 2022, the U.S. Olympic team selected Perbix to join them.

It only took him a handful of AHL games to show that he was ready for a higher level, and in 29 outings for the Lightning this season has eight points. The 6’2″ right-shot defender has skated next to Victor Hedman and is averaging over 15 minutes so far.

For $1.125MM, there’s a lot of upside here for the Lightning with very little risk. If he continues to improve and stays in the team’s top four, he’ll be a huge bargain. If things turn and he struggles, the entire cap hit can be buried in the minor leagues.

Interestingly, because Perbix reached the NHL later than most prospects, he will actually be an unrestricted free agent at the end of this deal. With strong play, he could set himself up for a significant payday when he hits the open market just weeks after his 27th birthday.

As we approach the end of the year, PHR continues its look at what teams are thankful for in 2022-23. There also might be a few things your team would like down the road. We’ll examine what’s gone well in the early going and what could improve as the season rolls on for the Tampa Bay Lightning.

Who are the Lightning thankful for? 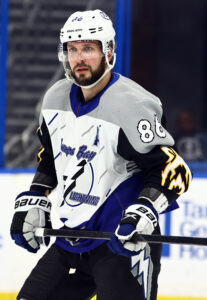 Yes, he’s healthy, and yes, he’s as good as he’s ever been. Kucherov has shone brightly this season, even among a notoriously strong supporting cast in Tampa Bay. He had played in just over a third of Tampa’s regular season games over the past two seasons, even losing the entire 2020-21 regular season to injury.

But he’s back on his world-beating pace, set to break the 120-point mark once again if he can suit up for a full 82 games. He leads all Lightning with 49 points in 32 games, 11 points ahead of Steven Stamkos. He’s also playing over 21 minutes per game, the highest mark in his NHL career.

The Lightning will have eight players with a cap hit greater than $5MM next season, not including the long-term injured reserve relief of Brent Seabrook. With that kind of top-loaded structure, you need quality depth, and you need your stars to be stars. Kucherov’s performance, especially when healthy, makes his $9.5MM cap hit seem like a bargain, even in this tight salary cap landscape. Continued elite performance from the 29-year-old is crucial in giving the Lightning a chance to remain among the league’s best.

What are the Lightning thankful for?

Financial certainty as the cap rises.

It’s been a delicate dance for the Lightning’s front office over the past few seasons. The team made three consecutive Stanley Cup Final appearances in a time of near-complete financial stagnation for the league, mainly due to their management’s ability to play with fire without getting burned.

In even better news, they’re in a position to get rewarded as the cap rises. They have very few core players to sign to new contracts anytime soon. Steven Stamkos and Victor Hedman will need new deals in the next three seasons, but they’ll be 34 and 35 at that time and won’t be able to command much of a raise, if any. Kucherov, Brayden Point, Anthony Cirelli, Mikhail Sergachev, Andrei Vasilevskiy, and even Erik Cernak and Nick Paul are locked in well past their 30th birthdays.

It finally seems like there may be some room to breathe for the Lightning, even if it’s a few seasons away.

More out of Victor Hedman.

18 points in 30 games aren’t bad by any measure, but Hedman has lost his grip on being the team’s unequivocal number-one defenseman, at least for now.

Mikhail Sergachev has dominated, potting 27 points in 30 games while seeing his usage equal nearly that of Hedman’s across 30 games. But it’s not just points separating the two this season.

Hedman’s main defense partners this year, Erik Cernak and Nicklaus Perbix, each have better defensive metrics paired with different defenders. Neither the Hedman-Cernak pairing nor the Hedman-Perbix pairing has eclipsed a 50% expected goals share this season, according to MoneyPuck’s model. It’s putting more strain on other Lightning defenders to pick up the legwork, and thankfully, they’re delivering.

What should be on the Lightning’s holiday wishlist?

Tampa still has very little maneuverability this season financially, so any trade deadline moves they make will need to be small and effective. Their forward core still makes up the eighth-ranked offense in the league, and their defense is still capable for the most part.

Their most glaring weakness can thankfully be easily addressed. Brian Elliott is 37 years old and, despite a 7-2-0 record this year, has just a .894 save percentage. If any health issue affects Vasilevskiy in the playoffs, it’s likely game over for Tampa in a tight Eastern Conference.