The Chicago Blackhawks have assigned a trio of players to the AHL’s Rockford IceHogs this morning, per the team. Forward Luke Philp, defenseman Filip Roos, and goalie Jaxson Stauber are all headed back to the American Hockey League.

The transactions leave Chicago with no healthy extra skaters on the active roster and just one goalie, so expect some or all of Philp, Roos, and Stauber to get recalled back to the NHL when Chicago returns from the All-Star break on February 7.

After getting recalled last Monday, the 27-year-old Philp made his NHL debut the following night against Vancouver after a long Canadian collegiate and AHL career up to that point. In his second career game two days later against Calgary, he recorded his first NHL point. Philp has been a solid offensive presence in Rockford this season, recording 30 points in 31 games. He could be a candidate to see a second recall later this season.

Roos, an undrafted 24-year-old rookie out of Sweden, has played 15 games with Chicago this year, recording a goal and two assists. He unexpectedly cracked Chicago’s opening night roster and lasted quite a while, as he stayed there until the Blackhawks assigned him to Rockford on December 13. After just over a month in the minors, where he had a respectable three goals and seven points in 17 games, Roos was recalled to Chicago along with Philp last Monday.

Stauber is the third undrafted free agent signing on this list, acquired by the Blackhawks in free agency after he posted a .921 save percentage in 37 games with Providence College last season. Despite some subpar AHL numbers (a .896 mark through 12 games in Rockford), Stauber’s played well in limited NHL action. He’s stopped 63 of 67 shots faced in two games with Chicago this year, both wins.

The Chicago Blackhawks have placed Tyler Johnson on injured reserve, and sent Isaak Phillips to the AHL. In their place, Luke Philp and Filip Roos have been recalled.

Johnson played just five shifts last night before exiting with an ankle injury, and was seen in a walking boot after the game. It’s just the latest in a long list of setbacks this season, derailing what has looked like a strong bounce-back whenever Johnson is in the lineup.

Through 22 appearances, the 32-year-old forward has five goals and 14 points, already doubling his point total from last year. He just can’t seem to stay healthy, leading to multiple stints on injured reserve. One thing in his favor is his contract, which will ensure his financial stability for another year. Johnson is signed through 2023-24 at a $5MM cap hit.

Phillips, 21, has played in 11 games for the Blackhawks this season and recorded his fourth point of the year on Saturday. The young defenseman has seen inconsistent ice time and has looked overmatched at times, but generally showed that he will soon be ready for NHL action.

He’ll be replaced on the roster by Roos, who skated in 15 games earlier this year before a recent stint in the minor leagues. The 24-year-old undrafted defenseman has three NHL points to his name in this, his rookie season.

Should Philp enter the lineup, it will be his first taste of NHL action. Undrafted, the 27-year-old has battled through three years at the University of Alberta and parts of four minor league seasons before getting this opportunity. This year with the Rockford IceHogs he has been outstanding, scoring 30 points in 31 games so far.

With veteran defenseman Jake Muzzin out indefinitely and with it not appearing as if he will be back anytime soon, there has been an expectation that the Maple Leafs will look outside the organization to try to shore up their back end.  It appears one of the options they’re interested in is Blackhawks blueliner Jake McCabe, Daily Faceoff’s Frank Seravalli reports (video link).

The 29-year-old is in his second season with Chicago after spending his first eight NHL seasons with Buffalo.  While McCabe isn’t known for his point production (the 22 he had last season stands as his career-high), he has been a quality defensive defender that can block shots and play with a physical edge which are some of the elements that Muzzin was bringing to the table for Toronto prior to his cervical spine injury. 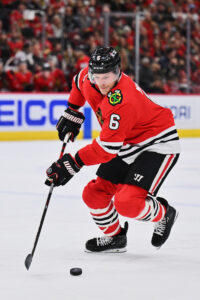 McCabe has two seasons left on his contract after this one that carries a $4MM AAV.  On the surface, it would be difficult to see McCabe fitting into Toronto’s salary structure but there are a couple of ways it could potentially work.  The first would be convincing Chicago to retain part of the contract to help make the money work; teams can retain up to 50% in a trade.  However, getting them to hold back that much would undoubtedly make the acquisition cost considerably higher, especially with the term left on the deal.

The other option is one that they’ll have to wait on for a while.  Muzzin is expected to be re-evaluated at some point next month and if they get word that the veteran won’t be back at all this season, Toronto could then fit McCabe’s full AAV into their LTIR pool which includes Muzzin’s $5.625MM AAV.  There would still be some questions about making the money work beyond 2022-23, however, barring some sort of indication that Muzzin’s injury is going to continue to linger.

Worth noting is that McCabe also has a seven-team no-trade clause.  While Seravalli notes that the majority of those no-trade teams are Canadian franchises, the Maple Leafs appear to be the one exception which would suggest that he’s amenable to joining them.

Again, with Muzzin’s situation, this isn’t a move that the Maple Leafs will be able to make until they get some further clarity on their veteran.  But that doesn’t stop them from exploring their options in the meantime and McCabe is certainly an interesting target to help replace a lot of what Muzzin brought to the table when he was healthy.

Another day, another recall for Jaxson Stauber of the Chicago Blackhawks. The minor league goaltender is back up after Petr Mrazek was run out of the building on Saturday. Mrazek allowed four goals on five shots before being pulled against the Seattle Kraken.

If you want a strong signal that the Blackhawks management is focused on the first overall pick, Mrazek’s continued presence is it. The veteran goaltender has an .875 save percentage on the year, a 4.26 goals-against average, and has won just three of his 16 appearances.

Stauber’s recall could suggest that there is an injury, or perhaps that Alex Stalock isn’t ready yet. Yesterday, the coaching staff told reporters including Mark Lazerus of The Athletic that Stalock would likely start against the Buffalo Sabres. Lazerus adds that Stalock is not on the ice for morning skate. (Update: Stalock is in concussion protocol and will not play)

The 23-year-old Stauber has played 12 professional games, all of them with the Rockford IceHogs. He has an .896 save percentage in those appearances. Undrafted, he was signed out of Providence College last year.

Ever since the Blackhawks started their rebuild, there has been plenty of trade speculation surrounding their two long-term veterans including captain Jonathan Toews.  He acknowledged to NBC Sports Chicago’s Charlie Roumeliotis that he hasn’t sat down with GM Kyle Davidson to discuss if he’ll be willing to waive his trade protection and leave the only franchise he has played for over a 15-year NHL career.  He indicated that as of yet, he hasn’t decided what’s next for him:

While Toews isn’t the top center he once was, he’s having a decent season with 12 goals and 12 assists in 40 games while winning nearly 64% of his faceoffs.  Assuming that the Blackhawks will cover the maximum 50% of his contract ($5.25MM of a $10.5MM AAV), they’ll undoubtedly have several interested teams should Toews decide to make himself available to be traded by March 3rd’s trade deadline.

It seems clear that Lukas Reichel is ready to make an impact at the NHL level, which is why the Chicago Blackhawks have sent him back to the minor leagues today. As they prepare for Patrick Kane’s return, the team has loaned Reichel back to the Rockford IceHogs, clearing a roster spot for the weekend.

Of the four games the 20-year-old forward has played this season, the Blackhawks have won three of them, including one over the Calgary Flames in which he was the second star with three points. Their win last night actually pulled them ahead of the Columbus Blue Jackets in the standings, the opposite of what they are looking to accomplish this year.

There’s an argument to be made that Reichel can benefit from more time in the minor leagues, playing with a Rockford team that should be competitive all year. But he has been a dominant player since the moment he entered that league, scoring at a rate better than a point-per-game through nearly 100 appearances.

There will be plenty of time to see Reichel in Chicago down the road, but for now, it looks like he’ll be limited to minor league action for the next while. After the trade deadline, when the team flips several pending free agents, perhaps he’ll get a more extended chance.

The Chicago Blackhawks have moved Patrick Kane to injured reserve retroactively to January 3 when he last played. That means he can come off whenever deemed healthy enough to return. Charlie Roumeliotis of NBCS Chicago reports that Kane is feeling better and hopes to play on Saturday.

Today’s transaction was to clear room for MacKenzie Entwistle, who has been activated from injured reserve and is ready to go. The 23-year-old winger hasn’t played since December while dealing with a wrist injury.

If Kane does return for Saturday’s game, it means another move is coming down the pipe. The Blackhawks remain at the maximum of 23 players on the roster, without a lot of obvious forward options to send down.

Lukas Reichel, who is still waiver-exempt, has been playing great in this latest call-up, scoring three points on Sunday in just his third game of the season. The 20-year-old is one of the team’s top prospects and looks ready to contribute at the NHL level, but might end up on his way back to the AHL in a few days.

For now, Kane will take time to fully heal and continue to make sure that there is no lingering effect. The legendary Blackhawks forward will be the focus of many trade rumors over the next few weeks, as he decides whether he wants to stay in Chicago or chase the Stanley Cup somewhere else.

If he’s not healthy, that decision doesn’t matter.