Jan 27: Peca has cleared waivers and can continue to play with the Thunderbirds.

Jan 26: Two players are coming off injured reserve for the St. Louis Blues. Robert Bortuzzo is joining the active roster, while Matthew Peca, who has been on season-opening injured reserve, has been placed on waivers according to Chris Johnston of NorthStar Bets.

Peca, 29, has spent the last two weeks on a conditioning loan to the AHL, where he recorded five points in six games for the Springfield Thunderbirds. His placement on waivers today allows him to continue playing for the minor league club, but requires activation from IR.

Of course, another team could also claim the depth forward. Through parts of several seasons, Peca has totaled 83 NHL games and scored 21 points. Last season for St. Louis he suited up just five times but was outstanding for the Thunderbirds, scoring 23 goals and 60 points in 68 games.

Bortuzzo, meanwhile, last played on January 7 and has appeared in 30 games for the Blues this season. The veteran defender has just one point in those games and averages 12 minutes a night in a very specific role.

Activating him now will give the Blues a bit more toughness and depth on the back end, but shouldn’t have much of an impact on their overall play. With him on the roster, the Blues are now carrying eight defensemen. Calle Rosen was the scratch in the team’s most recent game.

After activating Robert Bortuzzo yesterday, the St. Louis Blues ended up with eight healthy defensemen on the roster. That was never going to last long, and today they’ve solved the problem by sending Tyler Tucker to the AHL. Nikita Alexandrov has been recalled in his place. 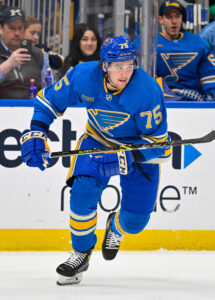 Tucker, 22, has played in 12 games for the Blues this season, showing he’s much more than the average seventh-round pick. The young defenseman has just one point but rarely looks overmatched, and should likely play a role on the team in the future.

For now, though, he’ll rejoin the Springfield Thunderbirds where he has 13 points in 25 games.

Alexandrov, 22, continues his yo-yo season, coming back up after just a few days. The young forward has four points in 16 games so far and should also get a bigger look down the stretch, especially if the Blues end up selling at the deadline. The 2019 second-round pick has 12 goals and 20 points in 23 games with the Thunderbirds.

There are two big question marks for the St. Louis Blues as they head into the trade deadline. What happens to Vladimir Tarasenko, a player who has spent his entire career with one organization, and what happens to captain Ryan O’Reilly, the addition that put them over the top a few years ago?

Tarasenko returned from injury this week, topping 17 minutes in his first game back, a loss to the Buffalo Sabres. Losses are piling up for the Blues these days, who are now sitting sixth in the Central Division with a 23-22-3 record. The 31-year-old sniper once submitted a trade request to try and start fresh somewhere else, and it seems like that’s where the relationship is headed again. A Tarasenko trade is likely, unless the next few weeks hold a remarkable turnaround for the Blues.

For O’Reilly, the other notable pending free agent forward that has been the subject of trade rumors, things aren’t so clear. He isn’t back on the ice yet, nearly a month after breaking his foot in a New Year’s Eve game against the Minnesota Wild. He also isn’t ready to say goodbye to St. Louis, where he won a Conn Smythe trophy en route to the Stanley Cup.

In an exclusive interview with Jeremy Rutherford of The Athletic, O’Reilly was clear:

This is where I want to be. I hope I don’t get moved, but I think things will probably progress, especially with the deadline coming up and the talks with that. We’ll see how it goes. We’re starting to get into that.

“That” in this case is extension talks, though it doesn’t seem like things are very far along at this point. O’Reilly went as far as saying he would give the Blues a discount, given his success there.

But even with a team-friendly deal, can the Blues afford to pass up the assets they would get for O’Reilly at the deadline?

The veteran center will turn 32 in a few weeks, and has seen his offensive production almost disappear this season. A player who was once known for his playmaking ability, he has just six assists through 37 games. Ten goals puts him on his regular pace, but it just hasn’t been the same for O’Reilly or the Blues this year.

He also carries no trade protection in the seven-year, $52.5MM deal that will expire at the end of this season. It wouldn’t be the first time he finds himself on the move. O’Reilly was originally drafted by the Colorado Avalanche, before a 2015 trade took him to the Buffalo Sabres. Three years after that he was on his way to St. Louis, and now after five years with the Blues, he might be headed to another team.

There are few players in the league that seem so perfectly built for the playoffs as O’Reilly. At his best, he can be one of the most productive two-way centers in the league, shutting down opponents and driving offense at the same time. That’s what he was in 2019, when he led all postseason players with 23 points. Just last year he had seven goals and 12 points in 12 games for the Blues, and that success will be intriguing to contenders looking to beef up a second or third line.

If he had his way, there would be no trade. O’Reilly wants to stay in St. Louis, but it’s not up to him.

The St. Louis Blues made the expected moves of activating Torey Krug and Vladimir Tarasenko today, but it came with some bad news. Pavel Buchnevich has been moved to injured reserve after a minor surgical procedure to address an ankle infection. Buchnevich will be re-evaluated after the All-Star break.

Some would argue that there is no more important player to the Blues than Buchnevich, who leads all forwards in ice time and has registered 38 points in 38 games this season. Losing him for any length of time will be difficult, though the team did stress the minor nature of the procedure.

On the bright side, Krug and Tarasenko will return after missing long stretches, helping to cover Buchnevich’s absence. It’s the latter that will be so interesting to watch as the trade deadline approaches and his time in St. Louis potentially comes to an end.

Tarasenko has only ever played for the Blues, and has reached the 30-goal plateau in six of his seven full seasons. This year, when healthy, he has still been excellent, racking up 10 goals and 29 points in 34 games. While he may not be the dynamic, game-changing power forward of a few years ago, Tarasenko would still be an impressive pickup for a contender at the deadline.

Of course, the Blues still have eyes on the playoffs themselves. Sitting at 23-21-3 on the year, they aren’t out of the Central Division race by any means. Getting two key veterans back should only help that chase, starting tonight with a game against the Buffalo Sabres.

A pair of valuable assets are very close to returning to the St. Louis Blues lineup, says Inside the Blues’ Lou Korac. Forward Vladimir Tarasenko and defenseman Torey Krug are projected to return to the St. Louis lineup when they host the Buffalo Sabres tomorrow night.

Both have missed double-digit sets of games, with Tarasenko missing the past ten contests and Krug missing the past 13. Tarasenko returning early from his hand injury well in advance of the March 3 trade deadline could pay dividends for the Blues, allowing him to showcase himself and build on his 70-point full-season pace to increase his potential trade value. The Blues are 6-4-0 in their past ten games without Tarasenko, but they’re still just two games over .500 and 11th in the Western Conference. With a pair of highly-valued pending free agents in Tarasenko and Ryan O’Reilly, the Blues would be wise to sell if they’re still this far removed from the playoff picture in a month’s time.

Getting Krug back is also important for a defense core slowly getting healthy. He has the highest points per game among all Blues defensemen, just a small bit ahead of normal partner Justin Faulk. His return should allow Niko Mikkola to slot back into a more comfortable bottom-pairing role.

Korac also notes that Tarasenko’s compatriot, Pavel Buchnevich, is questionable for the game against the Sabres with what he described as a “lingering” lower-body injury.

With yesterday’s news that star St. Louis Blues forward Vladimir Tarasenko is nearing a return from injured reserve, the Blues have made a move to clear space on their roster for Tarasenko’s return. Per a team announcement, veteran depth defenseman Steven Santini has been sent down to the team’s AHL affiliate, the Springfield Thunderbirds.

Santini, 27, was originally recalled from Springfield on January 4th. He played in four games for the Blues from January 7th to January 12th but has been a healthy scratch since. In those four games, Santini averaged just over 12 and a half minutes of ice time per night, and he registered six hits and ten blocked shots.

In Springfield, Santini served as an alternate captain and an important top-four, penalty-killing defenseman on a team that made the Calder Cup final. This season, he’s resumed his top-four, stay-at-home role for the Thunderbirds.

He’s not an offensive producer and has just five points in 32 AHL games this season, but he’s a relied-upon stay-at-home defender at that level and should help Springfield in that area now that he’s been sent back to the AHL.