The Kraken have been without Justin Schultz for the last week and it appears they’ll be missing him a little longer as team reporter Bob Condor mentions that the defenseman is now listed as being out week to week.  Schultz has done well in his first season with Seattle, notching 24 points in 42 games so far, already surpassing his point total from a year ago in 32 fewer contests.  With the All-Star break upcoming, it appears the earliest he’ll be able to return is February 5th.  For the time being, the team is keeping Schultz on the active roster.  If they need to open up a roster spot, they’ll be able to place him on injured reserve retroactively to the date of injury which means he could be activated at any time.

The Pittsburgh Penguins have their defensive leader back, activating Kris Letang from injured reserve. The veteran hasn’t played since December as he dealt with an injury and the death of his father.

To make room, the team has moved Jan Rutta to long-term injured reserve and Kasperi Kapanen to regular injured reserve. Both moves are retroactive, meaning they can be activated whenever ready to return.

Letang, 35, has been in and out of the lineup all season, playing just 29 games to this point. Incredibly, his 16 points during those games still lead all Penguins defenders, showing just how important he is to the group. While his average ice time is slightly down, Letang still sees more than 24 minutes a night playing in all situations.

The Penguins are welcoming in Florida this evening, as they try to get things rolling in the right direction. The 23-15-8 record they have so far is only good enough for fifth in the Metropolitan Division, though they do have some games in hand on Washington, who are immediately ahead of them.

Without Letang, the race for the playoffs would be incredibly difficult. Even at his age, he completely changes the look of the Pittsburgh defense corps and allows the others to fit into a more comfortable spot in the lineup. While there may be some rust, his return is a welcome one for Penguins fans.

The nightmare season for Kasperi Kapanen continues. The Pittsburgh Penguins have announced that Kapanen will be out on a week-to-week basis with a lower-body injury.

It’s brutal timing for the 26-year-old, as Kapanen had just started to find a consistent level of play. Through healthy scratches, benchings, and demotions, he has 17 points in 35 games so far. While only one of those points had come in his last seven appearances, there were some encouraging signs that he could fit into a bottom-six role for the rest of the season.

Now, with a weeks-long injury, he’s back to square one. The Penguins gave Kapanen a two-year, $6.4MM contract in the offseason when many wondered whether he would even get a qualifying offer. The deal now looks like one of the worst on the team, with Pittsburgh desperate for cap space to make a deadline addition.

An injury of this length could be a worst-case scenario. It might not be long enough to justify long-term injured reserve (and even if it is, they’ll have to keep room open for his activation), but keeps him off the active roster as the deadline approaches.

For other injury updates, the head coach Mike Sullivan called Jeff Petry and Ryan Poehling game-time decisions, while Kris Letang, Josh Archibald, and Jan Rutta are not yet ready to return.

Kasperi Kapanen’s second stint with the Penguins has been bumpy, to put it lightly.  He impressed in 2020-21 with 30 points in 40 games and it looked like he had finally become a consistent top-six winger.  However, his per-game production slipped last year to the point where there were questions about whether or not he’d be tendered last summer by Pittsburgh.  He ultimately was, inking a two-year, $6.4MM contract but has slid down the depth chart to the point where he has recently been a healthy scratch.

Accordingly, Dave Molinari of Pittsburgh Hockey Now argues that the time has come for the Penguins to part ways with the 26-year-old.  Playing a limited role (or not playing at all) isn’t going to help his trade value so he suggests that waiving him is the next best course of action (assuming there isn’t a viable trade out there).  If he clears, he’d get an opportunity to play a bigger role and perhaps rediscover his scoring touch while giving Pittsburgh a bit of cap flexibility ($1.125MM of his AAV would come off).  At this point, with the alternatives being having him struggle or in the press box, it’s an option that GM Ron Hextall might be considering.

Elsewhere in the East:

The dates for the upcoming arbitration hearings have been set, with the first one scheduled for July 27. Hearings will continue through August 11 this year, with that being the busiest day of the schedule. It is important to note that the CBA agreement in 2020 changed the rules for arbitration so that once a hearing begins, teams are no longer allowed to negotiate with the player in question.

The full schedule is:

The Pittsburgh Penguins have avoided arbitration with Kasperi Kapanen, as PuckPedia reports the two sides have agreed to a two-year deal worth a total of $6.4MM. Kapanen was one of 24 players to file for salary arbitration earlier this month but will no longer need his hearing, which had yet to be scheduled. 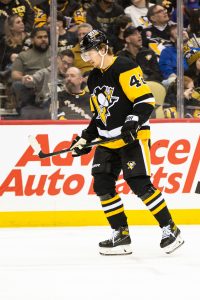 Interestingly enough, because of the way his previous contract was designed by the Toronto Maple Leafs, Kapanen’s qualifying offer this summer only needed to be $840K. That’s despite a $3.2MM cap hit, the same number he will come in at on this new deal. The arbitration process would have likely yielded a deal similar to this, though the Penguins would have been able to decide whether it was a one or two-year award.

Still, there will be some who are disappointed that Kapanen remains at the same cap hit after another disappointing season. The 25-year-old has such obvious talent, with blinding speed, good puck skills, and a strong shot, but it has rarely resulted in a consistent performance. In 79 games this season he scored just 11 goals and 32 points, barely equaling his totals from 2020-21, when he played in just 40 games.

That has been the story of his career so far, and one that makes this deal relatively risky for the Penguins. Pittsburgh is in a win-now mode as Sidney Crosby, Evgeni Malkin, and Kris Letang approach the end of their careers, making $3.2MM in cap space even more valuable than it would be in some markets. If Kapanen plays the way he did in 2021-22, it will be a waste of precious resources.

Still, there is that tantalizing, immense upside with the speedster. During his first year (back) with the Penguins, that aforementioned shortened 2021-22 campaign, he scored at a 61-point pace. That kind of production would actually bring quite a bit of surplus value to the table and give Pittsburgh another legitimate force in the top nine.

As this will take him to unrestricted free agency in the summer of 2024, there is also a possibility that the Penguins intend to trade Kapanen at some point. The deal did not buy out a single UFA year, meaning he’s now scheduled to reach the market at the age of 27 (though he will be turning 28 just a few weeks into that year’s free agent period).

The National Hockey League Players Association (NHLPA) announced that 24 players have filed for player-elected salary arbitration, the deadline for which came this afternoon. This list is not necessarily the final and complete list of players headed for arbitration, with clubs now eligible to elect salary arbitration until tomorrow, July 18th at 5:00 pm ET.

Notably out of this list, Mikkola had previously filed for arbitration, but the two sides were able to settle on a one-year, $1.9MM contract that will leave the defenseman an UFA after next season.

A key distinction to add is that any player who has filed for arbitration is no longer eligible to sign an offer sheet, effectively taking the players on this list off the market. Three notable names that did not file for arbitration are Winnipeg Jets forward Pierre-Luc Dubois, Calgary Flames forward Matthew Tkachuk and Columbus Blue Jackets forward Patrik Laine. Though contract talks have been quiet on Dubois and Tkachuck, word of amicable discussions between Laine’s camp and Columbus has been made known. Once tomorrow’s club-elected salary arbitration deadline passes, teams and players will have time to prepare their cases before hearings begin, running from July 27th through August 11th.

It was a tough year for Penguins winger Kasperi Kapanen.  He had just 11 goals in 79 games and managed just two more points than he had in 2020-21 despite playing in 39 fewer contests.  However, Dave Molinari of Pittsburgh Hockey Now posits that the 25-year-old may have done enough in the playoffs to convince management to give him one more chance instead of non-tendering him this summer.  Kapanen is owed a $3.2MM qualifying offer and also has arbitration eligibility which complicates things as he’s unlikely to be awarded a deal that’s above the walkaway threshold.  Molinari suggests Pittsburgh try to offer him a deal with a reduced salary in the hopes that Kapanen opts for that over testing the open market with a non-tender in July.  If they can’t agree on a new deal, GM Ron Hextall is going to have a big decision on his hands on whether or not to qualify him.

The Seattle Kraken are “open for business” in regards to being a third-party broker for trade deadline deals or even a parachute for bad contracts, according to general manager Ron Francis. Francis spoke with Ryan S. Clark of The Athletic and was quite clear that he has already told every other GM in the league that they are willing to spend cap space and money to acquire other assets.

Interestingly enough, he also explained, among other things, that the team is planning on being aggressive again in free agency this summer. Elliotte Friedman of Sportsnet happened to include a note in today’s 32 Thoughts column that he sees John Klingberg as a good fit for Seattle in the offseason when the veteran defenseman hits unrestricted free agency.

The Pittsburgh Penguins have placed Kasperi Kapanen in the COVID protocol, raising their current number to eight if you count Pierre-Olivier Joseph, who tested positive just after being recalled to the taxi squad yesterday. Sam Lafferty is also absent from the team with a non-COVID illness.

Kapanen joins Joseph, Dominik Simon, Teddy Blueger, Evan Rodrigues, Mike Matheson, John Marino, and Tristan Jarry in the protocol, with the latter six all going in on December 27. That leaves the Penguins quite a bit shorthanded for the moment, though given the postponements that have already happened they won’t play again until Sunday.

Still, that doesn’t give any of these players time to exit the protocol if they’re serving the usual ten-day quarantine. Kapanen and the others will likely miss Sunday’s game against the San Jose Sharks, leaving the team with some work to do in order to put together a competitive roster. With Jason Zucker out with an injury as well, the depth will be tested in Pittsburgh.