The Montreal Canadiens started their on-ice portion of training camp today, but they were a bit shorthanded. The team announced that Paul Byron, Mike Hoffman, Joel Teasdale, Josh Brook, and Carey Price all failed their physicals as they deal with various injuries. All five players are “most likely” out for the entire camp.

While the news about Price isn’t unexpected, the fact that Hoffman is going to miss all of camp came as a surprise to many after he signed a three-year, $13.5MM contract this offseason. The 31-year-old sniper is dealing with a lower-body injury and it is not clear if he will miss any of the season at this point.

Hoffman was signed to add a little more scoring punch to a group that finished 17th in goals for last season. They bid farewell to Tomas Tatar, Phillip Danault, Corey Perry, and Jesperi Kotkaniemi, but should be getting a full season from young phenom Cole Caufield. One of the most consistent goal-scoring and powerplay threats in the league, Hoffman has scored 186 goals over the last seven seasons, including 17 in 52 games last year.

The Canadiens, who went to the Stanley Cup Finals last season, will have a difficult path to the playoffs this year. The divisions are back to normal, meaning the Atlantic Division is packed with the likes of the Tampa Bay Lightning, Boston Bruins, Florida Panthers, and Toronto Maple Leafs, all teams that finished ahead of Montreal last season. Early injuries can be overcome, but they certainly won’t make things easier.

Maple Leafs defenseman Morgan Rielly is heading into the final year of his contract and with a $5MM price tag on his current deal, it’s safe to say that he’s heading for a sizable raise on his next deal.  The blueliner spoke with reporters today including TSN’s Kristen Shilton to discuss his situation:

That’s exactly what the Red Wings wanted Petruzzelli to do, according to a report from Scott Wheeler of The Athletic, but the 22-year-old was ready to test himself at the next level. He signed a two-year AHL contract with the Toronto Marlies, joining a Maple Leafs’ organization that is still searching for its “goaltender of the future.” The 2021 Hobey Baker finalist explained to Wheeler exactly why he chose Toronto to start his pro career and went in-depth on the struggles he has had to add weight to his 6’6″ frame in the past. There’s still a long way to go for the young netminder, but an NHL deal at some point down the road seems likely.

Gusev has had quite the journey around the NHL despite only playing 97 career games over the past two seasons. Originally a seventh-round draft selection in 2012 by the Tampa Bay Lightning, Gusev was dealt to the Vegas Golden Knights in 2017 for expansion draft considerations. Gusev signed his entry-level contract with Vegas during the 2019 Stanley Cup Playoffs, but never suited up for the franchise. His signing rights were dealt to the New Jersey Devils just months later in exchange for draft picks, where the former KHL All-Star and Gagarin Cup Champion then suited up for his rookie season. Things went well for Gusev in 2019-20, scoring 44 points in 66 games, but fell out of favor with the coaching staff this year and saw his contract mutually terminated. After clearing waivers, Gusev signed a deal with the Florida Panthers for the remainder of the season. He performed decently with Florida down the stretch, scoring five points in 11 games, but didn’t make a playoff appearance.

While his inconsistency and uncertainty last season may have some questioning the tryout, he’s still just one year removed from a 40-point campaign in a shortened season. Gusev’s certainly had his struggles defensively, he’s still an extremely skilled playmaker and a valuable power-play option. Gusev, if he’s signed, could join a left-wing depth chart in Toronto that’s wide open. He’ll compete with Nick Ritchie, Michael Bunting, and others for potential top-six usage with either Auston Matthews or John Tavares. Adding Gusev to an already possession-strong unit could potentially pay dividends.

Jim Balsillie finally gets his wish, the NHL is headed to Hamilton. No, a franchise isn’t relocating, but the Toronto Maple Leafs and Buffalo Sabres will take part in the 2022 Heritage Classic at Tim Hortons Field in Hamilton, Ontario on March 13 of next year. The field is home to the Hamilton Tiger-Cats of the CFL. NHL commissioner Gary Bettman released this statement.

We are excited to announce that we will be presenting another Tim Hortons Heritage Classic this season. When the Toronto Maple Leafs meet the Buffalo Sabres at Tim Hortons Field in Hamilton, we again will honor Canada’s preeminent role in the history of our game while renewing a great and longstanding NHL rivalry. In addition, by inviting the first U.S.-based team to a Heritage Classic, we will celebrate the greater Golden Horseshoe region as the home of so many fans of both the Leafs and Sabres.

The event had previously been held in NHL cities, but in 2019, the league branched out and held the Heritage Classic in Regina, Saskatchewan, where it was a huge success. This will be a similarly neutral-feeling location with the Sabres as the first U.S.-based team taking part. It will be Toronto’s fourth regular season outdoor game and first since the 2018 Stadium Series. The Sabres have been involved in two previous outdoor games, including the 2018 Winter Classic.

Tim Hortons Field is a multi-purpose stadium that hosts the Tiger-Cats and Forge FC of the Canadian Premier League, and will be the venue for the 2021 Grey Cup in December. It has a normal capacity of close to 24,000 but that can be expanded to nearly 40,000 for special events, according to Mike Harrington of the Buffalo News, who reported last month that this game was in the works.

Only fours weeks in to a “minimum” six-week recovery period following impromptu wrist surgery, Auston Matthews is hopeful that he will be at full strength to begin the regular season. The Toronto Maple Leafs star tells NHL.com’s Mike Zeisberger that his rehab is “coming along well”, though there are still several major steps to go. Matthews remains in a splint and remains at least a couple of weeks from moving beyond that stage of his recovery to actually testing his wrist and building his strength back up. Matthews claims that the injury, which plagued him for much of last season, is not serious, but he is happy that he decided to address it this summer after the pain had returned during his early off-season workouts. Hopefully an elective surgery for a “not serious” injury doesn’t impact the start of Matthews’ season, but as of right now he does not believe that will be the case. Matthews tells Zeisberger that he plans to resume skating this week and then take his wrist rehab “day by day” as the season approaches. The Leafs open up training camp and begin preseason play within Matthews’ minimum recovery window, so that is surely to impact his preparation for the season, but if the reigning Rocket Richard winner is at least healthy by Toronto’s October 13 opener with no more lingering wrist discomfort, then the surprise surgery will have been the right choice on all accounts.

While the Maple Leafs opted to keep their core intact this summer, GM Kyle Dubas acknowledged on a recent edition of the Bob McCown Podcast (audio link) that he did give some consideration to shaking things up but that none of the moves would have made them tangibly better, only different.  Instead, he opted to change up some of the depth players instead while bringing in a handful of wingers to battle for Zach Hyman’s spot in the top six while believing that Toronto will be able to get over the playoff hump following another early elimination last season.  There will be more decisions to be made next summer when it comes to their core with defenseman Morgan Rielly and goalie Jack Campbell slated to become unrestricted free agents and not a lot of cap flexibility to work with at that time.

Still somewhat in the dead of the offseason, development camps are starting up for the majority of teams across the league. The pace of news is sure to increase in the coming days as these camps get underway, especially with training camps just around the corner as well. For now, the focus turns to the Toronto Maple Leafs, who had a variety of absences today from their camp. Defenders Joseph Duszak and Riley McCourt were both absent with injuries, The Toronto Sun’s Lance Hornby reports. Duszak, who’s on an NHL contract and has impressed in back-to-back seasons with the Toronto Marlies, was absent with a foot injury. This development camp and ensuing training camp will be important for him, giving Duszak a chance to show that he can be a legitimate call-up option for the team in case of injury. McCourt is on an AHL contract and is entering his second season of professional hockey after tallying one assist in eight games with the Marlies last year. Hornby also mentions the omission of Colby Saganiuk from camp, as he was held out as a precaution due to illness. Saganiuk is attending the camp on an invite basis, as the 18-year-old will be returning to the OHL’s Erie Otters next year.

Elsewhere across the NHL:

The Toronto Maple Leafs were forced to say goodbye to Zach Hyman this offseason when he signed a massive seven-year, $38.5MM deal. With Hyman being the team’s only legitimate top-six left-winger, you would guess that someone like Ilya Mikheyev would be excited about the opportunity that should be there in 2021-22. Perhaps not, as Mikheyev requested a trade at the end of this season according to Elliotte Friedman of Sportsnet. 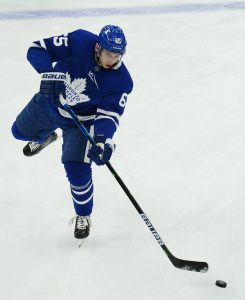 With Hyman’s departure though, and bargain bin replacements signed in the offseason, it makes sense why the Maple Leafs don’t want to grant Mikheyev’s request. According to Friedman, the organization has let him know they still consider him a big part of the team, even after a year that saw his average ice time drop to just 14:13. Just 12:28 of that was at even-strength, and Mikheyev ended up with 17 points in 54 games.

Heading into his final season before unrestricted free agency, it’s easy to see why Mikheyev might want a different opportunity. The 26-year-old was an undrafted free agent signing out of the KHL and unless he shows that he’s closer to the player that scored 23 points in 39 games as a rookie, it could be difficult to secure a deal worth more than the $2.19MM he’ll earn this season. The fact that fellow KHL signing Alexander Barabanov–who couldn’t even crack the Maple Leafs lineup on a regular basis–found such immediate success with the San Jose Sharks, could be a shining example of that greener grass.

Once again though, the Maple Leafs depth chart on the left side is not very imposing at the time being. The team signed Nick Ritchie and Michael Bunting, who both may get looks in the top-six, but neither are locks to establish themselves beside Auston Matthews and John Tavares. There could be a real opportunity for Mikheyev this season with Hyman (and Joe Thornton, who played a good chunk of the season on the first line) out of the picture, if he’s willing to take the organization at their word and buy-in.