Steve Yzerman fired the first shot in the pre-expansion draft trade market by acquiring  Mikhail Sergachev from Montreal for Jonathan Drouin, a move that gave the Lightning flexibility both with the cap and their expansion protection list. It also filled a need with the Bolts on defense. With that in mind, it makes Yzerman and the Lightning’s decisions slightly easier as to who to protect and who to expose. But there are still some tough choices to make.

Unloading Drouin certainly helped from a financial and expansion list aspect.  This makes it somewhat easier for forwards to put on the protected list.

Ondrej Palat and Alex Killorn are both choices that benefitted from Drouin being moved. Killorn netted 19 goals while Palat will continue to get better. Stamkos and Callahan both have NMCs. Despite fighting injury and not matching his production from 2014-15, Johnson is too good of a talent to leave exposed.

It’s on defense where tougher decisions need to be made, and it will come down to three players. Hedman and Stralman will both be protected, Hedman because he has a no-movement clause and Stralman is key to the Lightning blueline. Jason Garrison and Braydon Coburn are both carrying heavier hits for the cap and will most likely be left alone when they’re exposed. Garrison could hypothetically be taken with his deal ending at the conclusion of the 2017-18 season, but the $4.6MM hit would probably scare Vegas away. 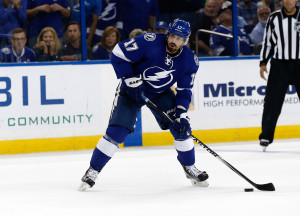 That leaves three choices to protect: Andrej Sustr, Jake Dotchin, and Slater Koekkoek. Sustr is a restricted free agent and won’t be able to command much in the way of money after having a down year. That doesn’t make him exempt from being exposed. If anything, seeing his numbers drop with a number of other options pounding on the door for the big club could make him the odd man out. However, he’s still an economical option and any leverage he had took a hit with the acquisition of Sergachev, who if scouting is correct, should find time on the Tampa blueline next season. But the problem with protecting Sustr is that Tampa would risk losing two young, and talented defensemen for nothing. In the same breath, would the Bolts want to possibly lose a steady defenseman who is only 26?

That leads to Dotchin and Koekkoek. Dotchin just turned 23, and registered 11 points in 35 games this season. The problem is, as Lightning blog Raw Charge pointed out, his sample size was limited compared to Koekkoek while being paired with Hedman. The 23-year-old Koekkoek logged 41 games over the past two seasons,  but played strong for AHL affiliate Syracuse during the Calder Cup playoffs. Picking between them is essentially splitting hairs. Koekkoek  appears to have the higher ceiling, and plays a cleaner game than Dotchin. Though they play different games, Yzerman might prefer a more disciplined, puck moving defenseman when choosing who to protect. At the same time, Dotchin plays a physical game, and can move the puck as well. He’s not afraid to muck it up, and provides a presence that protects his teammates on the ice–while still contributing on the score sheet. As Tampa Bay Times beat writer Joe Smith wrote, Dotchin has stood out to management, especially in the NHL and AHL during Syracuse’s Calder Cup Final run.

With two younger defensive prospects and after having a less than stellar season, predict Sustr to be exposed and Koekkoek protected. Don’t be surprised, as many others have written, if Yzerman pulls something off to keep all of his young defensemen so Dotchin remains in the fold.

Vasilevskiy is truly the only option to protect as 24-year-old netminder Kristers Gudlevskis is unlikely to be taken with other options presumably available from other teams. Of the decisions, it seems to be the least of Tampa’s worries.

The Lightning, despite missing the playoffs and sustaining injuries to one key player after another, still have a strong lineup that will absolutely compete next season. Peddling Drouin off certainly helped matters, but the third player to protect defensively is a tough decision to make. At the end of the day, though, Yzerman has shown skills deft enough to take a challenging situation and somehow make it work out. Don’t be surprised if he finds a way to do it again.

Chris Johnston of Sportsnet reports that the Tampa Bay Lightning have traded Adam Wilcox to Florida for Mike McKenna. Both goaltenders are playing in the AHL at the moment, though McKenna does have some NHL experience over his lengthy professional career.

McKenna was drafted way back in 2002 by the Nashville Predators, and has bounced around the minor leagues for over a decade. He has been excellent, average and bad at different times, with the most recent stint with Springfield being closer to the lower end of that scale. The 33-year old has a .907 save percentage this season.

Wilcox on the other hand is just 24 but has had a tough time adjusting to the AHL since starring at the University of Minnesota. At a .895 save percentage this season, Syracuse needed an improvement for their upcoming playoff run. Despite their bad goaltending—Kristers Gudlevskis also has a sub-.900 save percentage this season—the Crunch are in first place in the North Division and expect another playoff appearance.

There has been a flurry of roster transactions so far today with several players recalled from or reassigned to the minor leagues. We’ll keep track of those moves in this post:

Following our report that Ben Bishop had left the Tampa Bay game last night with an apparent right leg injury, the Lightning have announced that he’ll be out for three to four weeks with a lower-body injury. The team had already recalled Kristers Gudlevskis from Syracuse to replace him.

Even taking the optimistic timeline of three weeks means Bishop will be unavailable for the team’s next nine games, placing an even heavier burden on Andrei Vasilevskiy. The young netminder has already made 12 starts this year, well on his way to break his career high of 21 set last season. Though Bishop was still technically the starter, the three-year extension that Vasilevskiy signed this summer indicated that the team is ready to hand him the reins.

For Bishop, this is just another hit to his upcoming free agency that was already being affected with his play. Last year’s Vezina runner-up was having the worst season of his career, carrying a mediocre .909 save percentage into Wednesday. While he’s likely to bounce back somewhat, being on the wrong side of 30, enduring injury and seeing a downward trend in performance are three pretty big red flags.

It’ll be interesting to see what the Lightning do over this stretch, as it contains two back-to-back situations. Joe Smith of the Tampa Bay Times wouldn’t be surprised to see Adam Wilcox get a chance in one of those games, as the 24-year old is dominating at the AHL level.

After Ben Bishop suffered a lower-body injury in last night’s game, the Tampa Bay Lightning have recalled Kristers Gudlevksis from the Syracuse Crunch.

If the name Gudlevskis sounds familiar, it’s likely because of his performance for Latvia at the 2014 Olympics. In their 2-1 quarter-final loss against Canada, Gudlevskis made 55 saves on 57 shots.

So far this season, Gudlevskis has struggled in the AHL, with just a 5-4-2 record and an 0.884 SV%. However, with Bishop expected to be gone sometime this year or this summer, an NHL callup is a chance for Gudlevskis to show he has what it takes to back up Andrei Vasilevskiy going forward.