The hockey world chugs along as we wait for preseason games to start in a few weeks. We’ll keep track of the minor moves right here:

Free agency is now a little more than a month away from opening up and there are quite a few prominent players set to hit the open market while many teams have key restricted free agents to re-sign.  Here is a breakdown of Vancouver’s free agent situation. 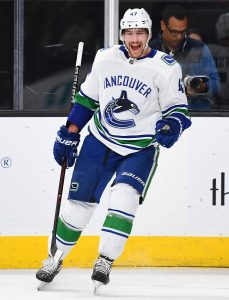 Considered to be a player who could break out at any time, the 25-year-old restricted free agent never has had the opportunity as injuries have derailed any true success so far. Having already played in parts of seven seasons and three complete seasons, Baertschi has never played a full season or even close to that much (his season high is 69 games back in 2015-16). This past year, the winger only got into 53 games as he dealt with a jaw injury in December after being hit in the face with a puck and then separated his shoulder in March that ended his season. With 14 goals and 29 points, Baertschi has the potential to contribute to a young team if he can stay healthy.

While the team will likely find a way to ink him to a one-year extension (he made $1.85MM each of the last two years), the team must also determine if he’s a core player who will be a major contributor on his team in the future. Another injury prone year could force the team to move on from him if he can’t prove that he can stay on the ice.

Key Unrestricted Free Agent: F Darren Archibald — Archibald’s name suggests that the team has little to worry about when it comes to their own free agents. With just three NHL-level unrestricted free agents, Archibald’s value stands out. The 6-foot-3, 210-pound wing provides the team with grit, solid skating and physicality and has started to step up for Vancouver this season. A long-time AHL player, Archibald got into 27 games for the Canucks this season, putting up four goals and nine points and was a favorite of coach Travis Green and might be a cheap fourth-line option for Vancouver (he made $650K last season) rather than the franchise go out and sign a veteran for that spot.

Projected Cap Space: The team should have plenty of cap space if the team is ready to spend after the retirements of Henrik Sedin and Daniel Sedin. They have a little less than $53MM committed to players for the 2018-19 season and few contracts of their own that they have to deal with. The team could attempt to add a few veterans to mesh with their young core of Bo Horvat, Brock Boeser and Elias Pettersson and must focus more of their attention on their defense, but they do have plenty of space to do that.

END_OF_DOCUMENT_TOKEN_TO_BE_REPLACED

Fresh off of his rookie season, checking forward Joseph LaBate has re-signed with the Vancouver Canucks. The team announced today that the 24-year-old has signed a one-year, two-way deal worth the league minimum of $650K. The two sides came to terms below the value of LaBate’s qualifying offer, $660K, which was made last week.

Standing 6’5″ and weighing over 200 lbs., LaBate is a noticeable presence on the ice. A two-way forward who can play both center and wing, he is a good fit for a versatile, energy-line job when called upon by Vancouver. While he provides only meager offense – no points in 13 NHL games and just 16 points in 38 AHL games last year –  he makes up for it with consistent defensive play. In the team’s press release, GM Jim Benning praised LaBate’s ability to be a physical presence for both the Canucks and AHL’s Utica Comets. Without many big checking forwards on the roster, Vancouver likely hopes that LaBate can carve out a role for himself on their bottom line as a two-way threat and work towards exhibiting some of the offensive touch he showed as a four-year starter at the University of Wisconsin.

While Benning and the Canucks are happy to have one of their young players back under contract, the team still has their work cut out for them with extending restricted free agents, with Bo Horvat, Brendan Gaunce, Reid Boucher, Michael Chaput and Evan McEneny in need of new deals. LaBate is just the beginning of several expected contracts this off-season for Vancouver.

Garret Sparks has been returned to the Toronto Marlies after backing up Curtis McElhinney on Tuesday night. The Maple Leafs will welcome Frederik Andersen back into the lineup when they take on the Nashville Predators tomorrow night, though whether he starts or not is still up in the air. Sparks hasn’t played a single game for the Maple Leafs this season after taking the starting job down the stretch last year. He’s faced injury and a suspension earlier this year for “violent and sexist language toward a user in an online group.”

A seventh-round pick of the Maple Leafs in 2011, Sparks has battled his way up the depth chart in Toronto and now sits as the starter for the Marlies as they head into the playoffs. With McElhinney hitting the open market as a free agent this summer, it is possible that Sparks would be first in line for the backup job next season.

Here is a rundown of today’s minor roster moves: