F Andrew Mangiapane – Throughout his career, Mangiapane has done everything right and only continues to get better. A former sixth-round pick in 2015, he worked his way into permanent role in 2018-19 and solidified himself as a top-six forward this year and it showed, posting career highs in his second full season, scoring 17 goals and 32 points. He added another three goals in 10 playoff games this year. The 24-year-old is likely to get a raise after making $800K on his now-expiring entry-level deal. He has proven his value as a key future forward on this team.

F Mark Jankowski – There was a lot of hope for Jankowski, the team’s first-round pick from 2012, but his third season in the NHL was a bit disappointing. In fact, after his rookie campaign in 2017-18 in which the 26-year-old tallied 17 goals, he has seen a continual decline, posting 15 goals in 2018-19 and followed that up with just five goals this year and has seen his playing time continue to drop as he played just 11:06 of ATOI. And at 6-foot-4 and a bottom-line player, he doesn’t play much of a physical game with just 80 recorded hits over three full seasons. However, the team has to decide whether he is worth the $1.75MM qualifying offer to retain his rights. 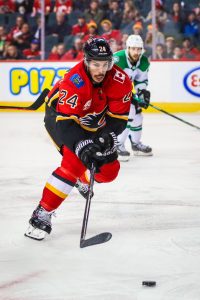 D Travis Hamonic – The Flames gave up quite a bit to bring in the defensive-minded Hamonic back in 2017. While not particularly much of an offensive player, the 30-year-old blueliner is quite a defensive player and was second on the team in ATOI this season at 21:11. Of course, the team was without his services in the playoffs as he opted out due to COVID-19 and family concerns. His daughter has had a significant battle with a life-threatening respiratory virus in the past while Hamonic has a new baby boy as well. However, the blueliner also was dealing with an upper-body injury for a large chunk of the regular season as well. Will the team bring him back? He was quite an affordable commodity at $3.86MM for the last few years, but undoubtedly will be looking for a raise and how many years is Calgary willing to offer to someone who is already 30 years old? With a team as cash-strapped as Calgary, Hamonic may be too pricey to keep.

D Erik Gustafsson – With five unrestricted free-agent defensemen, the team is likely to have to make some tough decisions in the near future. The Flames picked up Gustafsson for just a third-round pick at the trade deadline, which looked like a steal when Hamonic opted out of the playoffs. The team was expecting to lean on the once-high scoring defenseman. Instead, Gustafsson got just third-pairing minutes and wasn’t a big contributor down the stretch, suggesting the team may move on from him. While the 28-year-old’s price tag likely has dropped since posting a 17-goal, 60-point season back in 2018-19 and then following that up with a six-goal, 29-point season this year, a reunion would seem less likely considering the team has limited means as it is.

D T.J. Brodie – A constant trade-rumor candidate last summer, Brodie has found a way to remain with the team and produce quality minutes and may be the best option for Calgary if they were able to re-sign just one starter in the offseason. While his minutes have declined significantly since 2014-15, he still can put of solid defensive numbers and potentially provide solid play for less than the cost of either Hamonic or Gustafsson. He is capable of playing either side of the ice and plays a game that might suggest he could play deeper into his career than other defensemen.

G Cam Talbot – The Calgary Flames added Talbot to their roster as a veteran backup for young David Rittich and instead, Talbot walked away with the starting job, playing in all 10 of the team’s playoff games with Rittich getting just 16:35 of ice time in the final game before they were eliminated by Dallas (he gave up three goals on six shots). Talbot, who posted solid numbers this year, with a 2.63 GAA and a .919 save percentage in 26 regular season games, put up even better numbers in those 10 playoff games, including a 2.42 GAA and a .924 save percentage. The 33-year-old UFA made it clear he is looking for a starting job, but is Calgary willing to give up on Rittich just yet? And are they willing to pay up to keep Talbot, who could have quite a few suitors after his impressive season?

The Flames only have about $16MM in available cap space and plenty of players they need to sign, including at least one or two defensemen and a starting/tandem goaltender. That doesn’t leave much money left for the team to spend on potential free agents unless the Flames find a way to move out some salary or some key players. Of course, with several rumors spreading about the availability of Johnny Gaudreau, it could be an interesting offseason for the Calgary Flames.

Most of the NHL is at rest today after the huge number of Saturday games, meaning just four teams are in action. The Buffalo Sabres travel to Chicago to take on the Blackhawks, while the Calgary Flames and Vegas Golden Knights get reacquainted in Sin City. As teams prepare for the next week of action, we’ll keep track of all the minor moves right here.

Saturday: Head coach Bill Peters told reporters including Sportsnet 960’s Pat Steinberg that Czarnik’s injury is a significant one.  He pegs a potential return timeline around Christmas which means that Czarnik would be out for two months.

Friday: The Calgary Flames have placed Austin Czarnik on long-term injured reserve after he suffered a lower-body injury last night against the Florida Panthers. That means Czarnik will have to miss at least 10 games or 24 days. The team has recalled Alan Quine from the AHL’s Stockton Heat in the meantime.

It is unfortunate timing for Czarnik, who had points in three straight games and had carved out a bigger role for himself in Calgary. The 26-year old forward played in 54 games for the Flames last season after signing a two-year, $2.5MM deal in free agency, but was obviously hoping to be a more integral part of the team this time around.

The Flames are in a delicate dance with the cap ceiling, but moving Czarnik to long-term injured reserve will actually give them a little more flexibility—at least for now.

The NHL has a wild Tuesday night on tap with ten games on the schedule, including the Anaheim Ducks traveling to Nashville to prove they’re not just an early-season mirage. The Ducks are off to a 6-3 record to start the year, while the Predators, considered by many to be a Stanley Cup contender in the Western Conference, have recorded a more pedestrian 4-3-1 record through their first eight games. As teams prepare for all the action tonight, we’ll be here keeping track of all the minor moves around the hockey world.

The Florida Panthers did not enter this past off-season with all that much space under the salary cap ceiling, yet still went and handed out over $20MM in AAV to Sergei Bobrovsky, Anton Stralman, Brett Connolly, and Noel Acciari. As a result, the team has just $788K in cap leeway and no way to alleviate that pressure without making a move. Seeing as defenseman Mark Pysyk heard his name on the rumor mill last season, when the Panthers had ample cap space, the pressure on him has increased tenfold to prove that he is a valuable contributor to the team and not just $2.73MM in wasted space. Pysyk, an impending unrestricted free agent at year’s end, likes Florida and would like to stay with the team. However, he’ll find it hard to make his case that he should stick around when he is not on the ice. As The Athletic’s George Richards writes, Pysyk has found himself in a unfamiliar spot through the team’s first two games as a healthy scratch. New head coach Joel Quenneville opted to go with MacKenzie Weegar and Josh Brown as his bottom pair to begin the year, leaving Pysyk in the press box. Fortunately for Pysyk, he’s expected back in the lineup on Tuesday according to Quenneville. “He was always in consideration. He has some experience, gives us some versatility on the back end and can play both sides,” the veteran coach remarked. Yet, the trick is that even if Pysyk plays well in his return to the lineup, it doesn’t guarantee his safety from a trade. With his contract expiring, the 27-year-old is an expendable asset, especially for a team that hopes to contend for a playoff spot and could be eyeing cap space to make a trade addition of their own on the blue line later this season. If Pysyk is playing well and drawing attention from other teams, he could very well be on his way out of town. The two-way defender has heard those rumors before though, and all he can do is continue to focus on brining his best to the Panthers’ lineup whenever he’s active in hopes of proving he’s worth more as a long-term fit than as a cap dump.

Even with the season starting tomorrow, teams still have some final cuts to make today. Rosters have to be cap compliant by the end of the day. though with so much talent on waivers there might still be some last-minute moves. We’ll keep track of those right here. Keep checking back throughout the day for updates.

Today is the last day to use waivers in order to get a roster cap compliant for the start of the regular season, so we will see a lot of players available for selection.

The Flames have agreed to terms with center Alan Quine, announcing that they have re-signed the restricted free agent to a one-year, two-way contract.  Financial terms of the deal were not disclosed.

Quine split last season between Calgary and their AHL affiliate in Stockton.  At the minor league level, he was among the league leaders in points per game as he picked up 52 points in just 41 games.  While he wasn’t as prolific of a scorer with the Flames, he chipped in relatively well in the NHL with three goals and two helpers in 13 contests.

Between Calgary and the Islanders (who non-tendered him back in 2018), the 26-year-old has 97 games of NHL experience under his belt with nine goals and 18 assists.  He’s likely to be in a similar role next season as he was in 2018-19 where he’s initially ticketed to start in the minors but should serve as one of the first recalls if someone is injured up front.  Quine will be eligible for unrestricted free agency next offseason.

After 24 teams were in action Saturday, the NHL should be a bit quieter on Sunday with just five games slated for the day. Regardless, there should be some key matches on the slate as the Metropolitan Division leader Washington Capitals will go up against the Central Divison leading Winnipeg Jets. The Calgary Flames, losers of four straight, will also be in action Sunday as well, in an attempt to reclaim the Pacific Division lead as they go up against the red-hot Vegas Golden Knights. With the playoff race getting more intense, teams continue to shuffle their rosters. Make sure to check back throughout the day to get all the team’s transactions for the day.

With ten games on deck today spanning nine hours from first to last puck drop, there is plenty of NHL hockey to watch. The Flyers and Sabres get the action started with an early afternoon matinee, followed by the Golden Knights and Kings with their own early game on the west coast, and then eight contests later tonight, highlighted by Maple Leafs-Bruins, Lightning-Avalanche, Capitals-Blue Jackets, and Predators-Flames. In preparation, expect a flurry of moves today as teams align their rosters for Saturday’s games and beyond: