The Anaheim Ducks were able to get a point out of today’s shootout loss to the Minnesota Wild, but didn’t come out unharmed it seems. Veteran forward Derek Grant suffered a lower-body injury during the game and was ruled out for the remainder, said Anaheim. Grant, 32, is currently in his third stint as a member of the Ducks, but has seemed to really settle in, now in his third straight season without being moved.

The forward hit a career-high 29 points last season and has three points in 14 games to begin this season. While he might not be the impact scorer for Anaheim like Trevor Zegras is, his steady two-way game and veteran presence is one the Ducks surely don’t want to be without for too long. The Ducks were already without Grant for 10 games this season, missing most of the month of November.

After a major offseason overhaul rivaled only by the Ottawa Senators, expectations have been big for the Detroit Red Wings this season, however the team has gotten itself off to an up-and-down start. Sitting at 5-3-2 coming into today, the team would be faced with one of its tougher tasks of the young season this afternoon: a showdown with the New York Islanders, who were on a five-game winning streak. Detroit answered the call, shutting out the Islanders 3-0. That win appears to have come at a price, however. Forward Filip Zadina went down late in the third period after appearing to block a Ryan Pulock shot.

After the game, Red Wings head coach Derek Lalonde, provided an update to the media, including Michigan Live’s Ansar Kahn. According to Lalonde, Zadina’s injury “doesn’t look good” and Detroit may not see the winger for a while, adding that the team would know more tomorrow. Soon to be 23-years-old, Zadina has yet to become the player Detroit hoped he would be when he was drafted sixth-overall in 2018, and has zero points through his first nine games this year, including today. But, with Detroit missing more than its fair share of forwards, including Tyler Bertuzzi, Jakub Vrana, Oskar Sundqvist, and Robby Fabbri, losing Zadina for any period of time will surely be felt.

The New York Rangers will be without one of their young forwards for the next little while, telling reporters including Mollie Walker of the New York Post that Filip Chytil will be out for at least a week. While they called it an upper-body injury, Larry Brooks of the New York Post tweets that it is believed to be a concussion keeping Chytil off the ice.

The injury likely occurred on a hit from Cole Sillinger at the very beginning of yesterday’s game against the Columbus Blue Jackets, which left Chytil on the ice for several moments. The 23-year-old had been one of the team’s best players through the first part of the year, with Vince Mercogliano of USA Today noting that he is the only regular who hasn’t been on the ice for a goal against to this point.

These days, most news on the Vancouver Canucks relates to their early struggles to start the season. Given their 0-4-2 start after a tough 8-15-2 start last season, flanked by their extensions with Brock Boeser and J.T. Miller, but lack of extension with Bo Horvat, the team’s captain, the questions are fair and the storylines sensible. That said, Canucks head coach Bruce Boudreau did provide a few updates to the media this afternoon, including The Athletic’s Harman Dayal, regarding the team’s injuries.

Defenseman Quinn Hughes, who missed last night’s game against the Buffalo Sabres, a 5-1 loss in Vancouver’s home-opener, is still considered day-to-day as of right now, good news for one of the team’s best players, who is currently averaging 27:14 of time-on-ice per night, a career-high so far. No real update was given on defenseman Tucker Poolman, who has played in just three games this season, Boudreau calling it a “tough situation,” the 29-year-old having “good days and bad days.” It’s unclear exactly what is bothering Poolman, but he did miss a large chunk of last season while dealing with migraine issues. Defenseman Travis Dermott, who suffered a concussion in late September, has been progressing well, Boudreau said, but will not play this week.

A few days ago, we covered reports stating that the Toronto Maple Leafs had made it clear to teams across the league that they would be open to trading the early negotiating rights to Ilya Mikheyev to any interested teams. Now, we have some more clarity on what those interested teams might look like. According to TSN’s Chris Johnston, there look to be many. Johnston reports that “as many as half the teams” in the NHL are expected to hold at least some interest in acquiring Mikheyev this summer, and adds that Mikheyev is looking for a deal “in the $4MM range,” if not higher.

Such a vast level of interest in Mikheyev is not a complete surprise. The speedy, undrafted Russian winger scored 21 goals and 32 points in 53 games this season, bouncing back from an off 2020-21 where he only had seven goals and 17 points in 54 games. While not the largest reason for each team’s success, both the Colorado Avalanche and Tampa Bay Lightning feature premium middle-of-the-lineup players, and it’s likely that the teams interested in him consider him a “premium” middle-sixer. The NHL is a “copycat” league, so it’s very possible that the playoff success of relatively comparable players such as Artturi Lehkonen or Nick Paul has grown Mikheyev’s market. The more teams that enter a bidding war for his services, the more likely Mikheyev is to earn the type of contract the desires. So if anything, Johnston’s reporting is great news for Mikheyev and his camp, and could also be an early sign of the type of players that will be in high demand on July 13th.

Now, for some other notes regarding Eastern Conference teams:

After the Hurricanes got some good news when it came to goaltender Antti Raanta today, it appears things may be looking up even more on the injury front in Carolina.  Sara Civian of The Athletic reports (subscription link) that goaltender Frederik Andersen should be good to go for the playoffs as well.  The 32-year-old suffered an undisclosed injury a week and a half ago with little information revealed from there.  While Civian notes that Andersen isn’t expected to dress for any of Carolina’s games this week, having both him and Raanta available for the postseason will certainly help their chances of a lengthy playoff run.

With Tristan Jarry injured with a broken bone in his foot, Pittsburgh’s decision to not upgrade their backup goaltending spot at the trade deadline has come into question.  However, as Mike DeFabo of the Pittsburgh Post-Gazette illustrates, doing so wasn’t a viable option for the Penguins on a couple of fronts.  They only had enough money to add one piece – winger Rickard Rakell – with team president Brian Burke acknowledging they felt they needed to upgrade up front which made that the direction they took.  On top of that, aside from Marc-Andre Fleury whose AAV was too expensive to fit in, there weren’t any realistic upgrades on Casey DeSmith that were readily available.  DeSmith is now getting a prime opportunity to prove his value not only to Pittsburgh but around the rest of the league as he gets set to hit the open market in July.

The New York Rangers will be without young forward Kaapo Kakko for another month according to head coach Gerard Gallant, who spoke to reporters including Dan Rosen of NHL.com. He hasn’t played since January 21, missing the last several games before the break with the upper-body injury that’s keeping him out.

While he still hasn’t reached the level of offense that many expected from a second-overall pick, Kakko has been an excellent defensive presence for the Rangers this season. His average ice time is up to 16 minutes a night with outstanding possession numbers, and though he still isn’t a regular on the penalty kill, he’s at least seen some time shorthanded.

Unfortunately, he won’t get a chance to try and raise that offensive presence for a while. In 37 games he has 14 points, just seven shy of the 23 he had as a rookie. A month would take him out for another dozen games, after which he’d need to find his footing once again.

The team recalled Morgan Barron this morning but he may not be in the lineup for long. The 23-year-old has one point in nine games, playing fewer than ten minutes in five of his appearances, and could soon be replaced by Filip Chytil, who could return against the Boston Bruins when the Rangers come back from their long break next week.

Pittsburgh’s recent recall of Louis Domingue may have raised some eyebrows as adding a third goaltender to the roster usually means there’s an injury.  However, that’s not the case for the Penguins, reports Mike DeFabo of the Pittsburgh Post-Gazette.  Instead, starting goaltender Tristan Jarry didn’t travel with the team to Ottawa and won’t be in uniform against the Sens as they’ve elected to not have him travel to give him some extra rest but he’s expected to suit up for the Penguins tomorrow night in Washington.  At that point, blueliners Marcus Pettersson and Chad Ruhwedel will also be available to return after being re-added to COVID protocols yesterday for cross-border travel reasons, not another positive test.

The New York Rangers have taken care of a little restricted free agent business, signing Filip Chytil to a two-year contract. Chytil was not eligible for salary arbitration. Larry Brooks of the New York Post reports that the contract will carry an average annual value of $2.3MM. 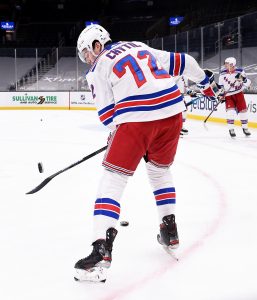 Now several years into his NHL career, Chytil has become a valuable part of the Rangers forward group even if his offensive production still hasn’t quite risen to expected levels. He registered eight goals and 22 points in 42 games this season while playing just over 13 minutes a night, mostly alongside young wingers Kaapo Kakko and Alexis Lafreniere. That trio, who are all 21-or-under, are an extremely important part of the future in New York but will all be expected to take a step forward this season.

In Chytil’s case specifically, the Rangers were not comfortable using him on the powerplay this season, which obviously limits his offensive potential. With Pavel Buchnevich gone, there may be more opportunity with the man-advantage, though it of course may not all go to Chytil. There is also the addition of a more traditional bottom-six option in Barclay Goodrow, one that may be able to take on heavy defensive minutes and allow players like Chytil to feast on weaker competition.

At the end of this contract Chytil will still be a restricted free agent, but will also be arbitration-eligible. If he wants to cash in on a big-money deal, he’ll have to put up improved scoring stats over the next two seasons. Still just 21, the first-round pick certainly has the talent to be a legitimate middle-six contributor. Now he just has to prove he can do it on a consistent basis.