Adler Mannheim of the German DEL announced six contract extensions today, among them former NHL forward Jordan Szwarz. The 31-year-old has signed through 2025, potentially ending any chance of a North American return.

Originally selected 97th overall by the Phoenix Coyotes in 2009, Szwarz made his NHL debut in 2013 and played 50 games at the highest level over the years. A born leader, he was captain of three different AHL teams – the Portland Pirates, Providence Bruins, and Belleville Senators – before leaving for the KHL in 2020.

An all-around talent, he racked up 296 points in 478 AHL games before leaving. This year with Mannheim he has 13 points in 19 games and is playing a key role in the successful club.

With the playoffs underway for almost everyone, the taxi squad shuffle has ended. The unique season that saw more daily transactions than ever before is coming to an end, hopefully never to return. Still, there are going to be some moves from teams preparing for their first round matchups, or players signing overseas. We’ll keep track of the notable minor moves right here.

After a full slate of games Saturday, the NHL docket has just five matchups today. However, with injuries growing, several teams will be making roster moves today:

Get ready for a full day of hockey. Monday’s lineup features four games being held at 1:00pm home team local time, as well as 3:00pm, 5:00pm, and 7:30pm. Among the story lines to watch are the Wild, Devils, and Blackhawks seeking their first wins of the season, the Avalanche and Oilers looking to stay perfect, and a collision of the league’s two stingiest teams, the Ducks and Bruins. Also to watch for are the roster moves made to open up the third week of the season. Keep up with all of the action here:

With the NHL regular season approaching quickly, many players will be put on waivers over the next several days. We’ll keep track of all of them right here:

*Petrovic was in Bruins’ training camp under a professional tryout. Waivers would indicate that the team has signed him to a standard player contract.

Like always, we’ll keep you aware of all the training camp cuts right here. Keep checking back to see the updated list:

The Ottawa Senators continue to bring in talent from their division rivals, signing former Providence Bruins captain Jordan Szwarz per a team release. It is a one-year, two-way contract for Szwarz worth $800K in the NHL. Szwarz, 28, has skated in 47 NHL games with the Bruins and Coyotes in his career.

Szwarz, 28, has been an excellent minor league player for nearly a decade, and is coming off his third consecutive 20 goal season for the Providence Bruins. That kind of offensive consistency at the AHL level is exactly what the Belleville Senators were looking for, after their team was led almost entirely by young prospects that will likely be graduating to the NHL in the upcoming years.

Key Restricted Free Agent: D Charlie McAvoy – With all the talk around the league of high-priced expectations for many of the top restricted free agent forwards around the league, arguably the best restricted free agent defenseman in McAvoy has seemingly flown under the radar. McAvoy has been amazing and has quickly taken over as the future of the Bruins defense, posting 14 goals and 60 points over the past two years with Boston. The 21-year-old has been the perfect offensive addition on the blueline since arriving after two years at Boston University. If there was something that could be holding McAvoy back, it would be his inability to stay healthy as he played just 63 games in his rookie year and then played even less last year in 54 games total. Despite that, the RFA should pick up a big pay raise over the $1.26MM he made last season. 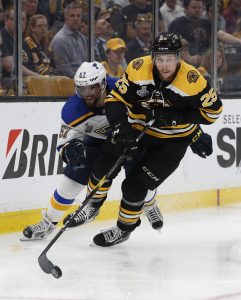 D – Brandon Carlo – In many ways, Carlo is the opposite of McAvoy. The 22-year-old is not known for his offense, but is a defensive player who has needed time to develop and only more recently has he developed into a shutdown defender that Boston had envisioned when they drafted the 6-foot-5 blueliner in the second round back in 2015. While he isn’t likely to come anywhere close to the money that McAvoy should receive, Carlo has become a key player on the team’s top-four and should only continue to get better.

F – Danton Heinen – One thing the Boston Bruins need are top-six wingers to continue posting the offense they are used to. The question is whether Heinen is that guy for them. After putting up 16 goals and 47 points in his rookie season, many people suspected that Heinen would continue to thrive in that role. Instead, he struggled putting the puck into the net and eventually found himself put on the team’s third line as he failed to produce, finishing the season with just 11 goals and 34 points. The question is which player is he? The team must decide that, likely ending up with a short-term deal so that Heinen can prove that he deserves to be paid.

Key Unrestricted Free Agents: F Marcus Johansson – The team fared quite well at the trade deadline, acquiring players who truly helped the franchise reach the Stanley Cup this season. One of the key players was Johansson, who had struggled in two seasons with New Jersey, but proved to be a big contributor in the playoffs, putting up four goals and 11 points in 22 playoff games. Unfortunately, his success could have priced himself out of Boston’s salary cap plans, but there is hope that both teams could still work out a deal. However, the team may be forced to look elsewhere if the 28-year-old can net himself an impressive offer from another team later this week.

F – Noel Acciari – Six goals and 14 points may not sound like much, but the 27-year-old has become a fixture on Boston’s fourth line. While the team could survive without him, Acciari is well known for his hard-hitting style of play and his willingness to sacrifice his body to help the team. In fact, the fourth-liner suffered a broken sternum, yet still played through it throughout the playoffs, something that any team might appreciate. Regardless, the team has made an offer and Acciari opted not to accept it, so the team could end up losing him, although a deal remains possible.

Projected Cap Space: The Bruins currently sit a little more than $12MM under the cap ceiling, according to CapFriendly, but still must add McAvoy, which could end up being pricey, while also having to sign Carlo and Heinen. That should take a chunk of that cap space, but the team should still have the ability to sign one of their unrestricted free agents or even find a couple of cheaper options on the unrestricted free agent market on Monday.

With a long layoff coming until their next matchup, Boston Bruins general manager Don Sweeney revealed the team’s Black Aces during a press conference earlier today, according to Boston Globe’s Matt Porter. The 12 players are expected to help the NHL team practice and likely to get some practice games in before the Stanley Cup begins on May 27.

Recalls and reassignment are few and far between these days, with just eight teams still alive in the NHL and AHL alike. A flurry of activity occurred today though, as two surviving Stanley Cup Playoffs contenders have called up a number of players from their AHL affiliates, who both ducked out of the Calder Cup Playoffs with first-round losses. According to the AHL, both the Colorado Avalanche and Boston Bruins have recalled their “black aces”, the group of minor league players brought up largely to practice with the NHL team during the postseason once their own season is over. With the salary cap not a factor in the postseason, most big league teams often choose to bring up a large number of AHLers for the experience, as well as emergency depth, and the Avs and Bruins have done just that.

Little more than a paper move for the Avalanche, the team has called up five players from their neighboring affiliate, the Colorado Eagles. The group includes goaltender Pavel Francouz, defenseman Anton Lindholm, and forwards A.J. Greer, Dominic Toninato, and Logan O’Connor. Each of these players has logged time with the Avs this season, with Greer leading the way with 15 games while the others all played in at least two. The skaters played minimal roles and combined for just three points, but Francouz, a veteran import from the KHL, was clutch in two relief appearances with a .943 save percentage and 1.96 GAA. Yet, it is Francouz who is least likely to see any playoff action as the third-string keeper. With lineup regular Matt Calvert battling an injury, one of the forwards could in fact make an appearance in this postseason. Greer and O’Connor, who finished second and third respectively in Eagles scoring, would be the top candidates.

Boston’s recruits are not coming from far away either, as they have called up a whopping 13 players from the nearby Providence Bruins. Forwards Anton Blidh – who signed an extension earlier today – Paul Carey, Peter Cehlarik, Ryan Fitzgerald, Jakob Forsbacka Karlsson, Trent Frederic, Zach Senyshyn, Lee Stempniak, Jack Studnicka, and Jordan Szwarz and defensemen Jeremy Lauzon, Urho Vaakanainen, and Jakub Zboril have joined the club. Amazingly, all but Fitzgerald, Studnicka, and Szwarz have suited up for Boston this season and Szwarz played in a dozen NHL games last year. The least experienced name is actually the most exciting, as this will be Studnicka’s first non-training camp experience with the Bruins. The 20-year-old, who most consider the Bruins’ top prospect, is fresh off a 73-point regular season and point-per-game postseason in the OHL and his NHL debut is highly anticipated. However, it is very unlikely to come in these playoffs. In fact, the Bruins are deep at every position as is and it would be a surprise to see any of their “black aces” take the ice outside of extenuating circumstances. On the other had, the team could use some energy and offense in their current series, so who knows.