After the Bo Horvat trade yesterday, the floodgates appear to be opening on the trade front. That’s especially true for the Vancouver Canucks, who have some desirable trade assets other than Horvat that could find their way out of town by the trade deadline.

One of those is Brock Boeser, who TSN’s Darren Dreger said today continues to receive interest from around the league. However, he reported that any Boeser trade, and the corresponding interest, hinges on how much salary Vancouver is willing to retain in a potential trade. Boeser is signed to a steep cap hit of $6.65MM for the next three seasons. With so many teams already dipping into LTIR pools to stay cap-compliant, Vancouver is unlikely to find a trade partner willing to take the full brunt of the deal. The 25-year-old has nine goals and 30 points in 41 games this season. That’s a 60-point pace over 82 games.

Team Canada has won the 2023 IIHF World Junior Championship, defeating Czechia to win the gold medal. The game-winning goal came off the stick of Arizona Coyotes prospect Dylan Guenther in overtime, ending Czechia’s bid for their first gold since 2001.

The 2023 presumptive first-overall pick and tournament MVP, Connor Bedard, finished the tournament with an astonishing 23 points in seven games, leading all other players in the tournament by nine points. He’s now the all-time leader for Canada at the World Juniors and set a single-tournament point record for Canadian players.

It’s a tough loss to swallow for Czechia, who played their hearts out and deserved to get this far in the tournament. Getting their first medal since 2005 is still a great success, and they’ll take home the silver. Goaltender Tomas Suchanek was named to the media All-Star team after posting a .934 save percentage and playing every minute of the tournament for Czechia.

The selection camp is over and Hockey Canada has chosen the 22 players that will represent their country later this month at the IIHF World Junior Championship. There were 29 players originally named to the camp but after several others were loaned from NHL teams, ten players ended up cut today.

The roster that will compete:

There will be a meeting of the Board of Governors next week at which time there will be another update about the projected salary cap for next season.  The most recent estimates were that if the escrow debt was repaid, the Upper Limit could jump to $86MM, an increase of $3.5MM from where it is now.  Meanwhile, if the debt wasn’t repaid, the increase would once again be limited to $1MM.

However, there could be a third option.  As Pierre LeBrun and Darren Dreger detailed in TSN’s latest Insider Trading segment, the NHLPA is polling its membership about their possible interest in smoothing out the cap increases over the next couple of years without affecting escrow.  That would likely result in a greater jump than $1MM next season which would allow for a bit more flexibility with so many teams capped out.  On the flip side, the anticipated jump once the escrow debt is paid off wouldn’t be as dramatic.  At this point, this is strictly a hypothetical scenario and it has not been discussed with the league just yet.

Elsewhere around the hockey world:

With the 2023 IIHF World Junior Championships beginning in three weeks to the day, teams are beginning to prepare for the second version of the tournament in just five months due to COVID. Organizations are already starting to release their first edition of rosters for the tournament, with USA Hockey doing so earlier today. Hockey Canada joined them minutes ago, releasing their list of 29 players invited to their World Junior Championship Selection Camp.

The organization will need to make six cuts before the tournament, but their camp selections are as follows:

While Shane Wright is noticeably absent from this roster, all it means is that the Kraken have yet to loan him to Team Canada. Wright is eligible to play in the tournament as long as he is loaned to Canada by December 25.

The 2023 IIHF World Junior Championship is rapidly approaching, with things set to kick off on the afternoon of December 26 with a match between Switzerland and Finland. Team USA will start their tournament later that day against Latvia. Today, the organization released the preliminary roster for the upcoming camp.

The group will be pared down closer to the tournament but currently includes:

The camp will be held in Plymouth, Michigan between December 12-17, at which point a 23-man roster will be selected.

After coming to see his legions of fans in Toronto one last time, Borje Salming has passed away at the age of 71. The legendary NHL defenseman was present at the recent Hockey Hall of Fame induction ceremony and honored at a Maple Leafs game. Team president Brendan Shanahan released the following statement:

The Toronto Maple Leafs mourn the loss of Börje Salming. Börje was a pioneer of the game and an icon with an unbreakable spirit and unquestioned toughness. He helped open the door for Europeans in the NHL and defined himself through his play on the ice and through his contributions to the community.

Börje joined the Maple Leafs 50 years ago and will forever be a part of our hockey family. We extend our deepest condolences to his wife, Pia, his children Theresa, Anders, Rasmus, Bianca, Lisa, and Sara, and brother Stieg. 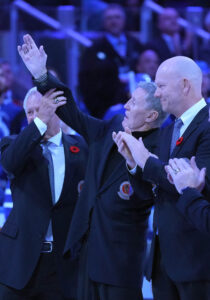 Salming was diagnosed with ALS (also known as Lou Gehrig’s disease) in August. After losing the ability to speak, he made the journey from Sweden to Toronto and stood flanked by Darryl Sittler and Mats Sundin while receiving a long standing ovation from the Maple Leafs crowd.

One of the greatest defensemen of all time, Salming finished in the top five of Norris Trophy voting for seven consecutive seasons after arriving in North America. One of the first European players to ever cross the ocean to play in the NHL, he would play 17 seasons in the league, all but one with the Maple Leafs. In total, he suited up 1,148 times in the regular season and recorded 787 points, including a career-high 78 in 1976-77, when he finished fourth in the Hart Trophy vote.

At the 1976 Canada Cup, Salming received a standing ovation from the Toronto crowd despite wearing a Swedish jersey and about to play Canada. He was arguably the most beloved player in Maple Leafs history, and one that changed the dynamic of the NHL for good.

European players would flood the league after trailblazers like Salming found success, with Sweden becoming one of the most well-represented nations in the NHL. He became the first Swedish player inducted into the Hockey Hall of Fame in 1996, and would go into the IIHF Hockey Hall of Fame in 1998. In 2017, he was included as one of the NHL’s ’100 Greatest Players.’ His No. 21 was retired by the Maple Leafs in 2016.

The 2023 IIHF World Junior Championship is just around the corner, with Canada once again expected to dominate the tournament with what should be a roster full of future stars. Today, Hockey Canada announced their coaching staff for the championship, headlined by Dennis Williams as their head coach.

Williams sees a promotion from last year’s tournament, where he served as an assistant coach under Dave Cameron. The 43-year-old is a two-time WHL Western Conference Coach of the Year winner with the Everett Silvertips and also served as the head coach for Canada’s “Black” team at the World Under-17 Hockey Challenge in 2018. He was also an assistant coach at the 2019 Hlinka Gretzky U18 tournament.

It’s been quite the coaching ride for Williams, who got his first coaching experience immediately after graduating from Bowling Green University as a graduate assistant in 2002-03. 20 seasons and five leagues later, he gets the call to lead the reigning gold medalists at the top junior tournament in hockey.

Combined success at the World Juniors and as a bench boss in the CHL can often quickly lead to NHL opportunities. It wouldn’t be surprising if Williams found himself on an NHL bench in 2023-24 if Canada can repeat as champions.

Julien, 48, is the head coach of the QMJHL’s Sherbrooke Phoenix and has held the role for the past seven-and-a-half seasons. He was the head coach for Canada at this year’s edition of the Hlinka Gretzky Cup, which ended just two months ago. It’s his first time joining the coaching staff for the U20 team.

Kisio and Letang return to the Canadian bench at the U20 tournament as assistants, reprising the roles that they held in 2019 and 2020, respectively. Guard’s only previous national team experience came as the goaltending coach for Canada White at the 2021 World Under-17 Hockey Challenge.

The IIHF has dropped all charges related to a years-old doping allegation for Valeri Nichushkin, according to the Russian Hockey Federation. The decision follows the additional analysis of a sample given back in 2013, when he was still playing with Traktor Chelyabinsk. It had been reanalyzed in 2019 and found to have a “suspicious level of testosterone,” leading to an additional investigation.

While this wouldn’t have affected his NHL standing, it could have impacted Nichushkin’s international eligibility. He hasn’t played at the World Championship since 2017, or Olympics since 2014.

Despite just holding a World Junior tournament a few weeks ago, things are already ramping up toward the next one. The IIHF and Hockey Canada have released the schedule for the 2023 event, which will be held in Halifax, Nova Scotia, and Moncton, New Brunswick. The tournament begins with Finland and Switzerland doing battle on December 26, while the U.S. and Canada open their tournaments against Latvia and Czechia respectively later that evening.

The two North American squads will not have a New Year’s Day matchup this time around as they are in different groups, with Russia not included this year. The gold medal game will be held on January 5. The full schedule is as follows:

END_OF_DOCUMENT_TOKEN_TO_BE_REPLACED

All times in central

The groups for the event are: