As we approach the ten-game mark for many teams, decisions will have to be made on young players who are still slide-eligible. That designation means that if they spend the year outside of the NHL, they will not burn a season off their entry-level contract, effectively extending their time as an inexpensive option. For Wyatt Johnston, a return to junior isn’t in the cards. The young forward has done enough to convince Dallas Stars general manager Jim Nill to keep him around, confirming yesterday’s report from Jeff Marek of Sportsnet. Notably, Nill did explain that they could return Johnston later in the year if necessary. 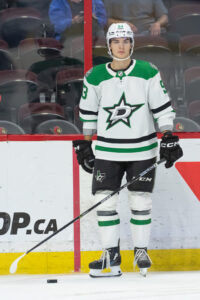 For some front offices, the 40-game mark is actually more important for a young player. It is at that point that the season is considered a full year of service time in regard to unrestricted free agent status. That is to say, if Johnston plays more than 40 games this year, he’ll be one year closer to hitting the open market.

Still, with how well he has played so far, this shouldn’t come as much of a surprise. After completely dominating the OHL last season, winning the league’s Most Outstanding Player trophy, the Most Sportsmanlike trophy, the scoring race, and the playoff scoring race, it was clear that he was ready for professional hockey. Because of the CHL-NHL agreement, that couldn’t be in the AHL, as Johnston is still only 19. So when the decision is between sending him back to a league where he scored 165 points in 93 games, or keeping him in the NHL, the team would be looking for a reason to keep him at the highest level.

Johnston has provided that reason, scoring three goals and four points in nine games while averaging just over 14 minutes a night. He’s overmatched in the faceoff circle as many young forwards are, and there are some rough edges that still need to be polished on his overall game. But there is oodles of talent in the 2021 first-round pick (23rd overall), and enough maturity to stick around.

Notably, he has averaged more even-strength ice time than players like Roope Hintz, Denis Gurianov, and Jamie Benn, showing just how much confidence head coach Peter DeBoer has in the young forward. The Stars are transitioning to a new wave of talent and now sit first in the Central Division – though that could change over the next little while with Jake Oettinger’s injury. It appears as though they’re willing to let Johnston learn on the job, and make his junior days a thing of the past.

The Dallas Stars are off to a flying start to begin their 2022-23 season. The team is 5-3-1 and first in the Central Division. Among multiple major factors contributing to their strong play has been the emergence of Wyatt Johnston. The Stars’ 2021 first-round pick tore the OHL apart last season and has started his NHL career with four points in nine games, which ranks him just outside the Stars’ top-five forwards in scoring.

Today, we have an update on Johnston. Since Johnston was an OHL player, the Stars had a nine-game window to decide if they would return Johnston to his OHL team and let his entry-level contract “slide” for another season before he would (presumably) make his full NHL debut next season. Per Sportsnet’s Jeff Marek, the Stars won’t be going that route with Johnston. Instead, Johnston is going to stay with the Stars and potentially be a full member of the team for the duration of the 2022-23 season.

Some other notes from across the NHL:

Despite a disappointing playoff exit, a coaching departure, and some key names hitting free agency, there are still things for the Dallas Stars to look forward to. One of those things is Wyatt Johnston, the team’s 2021 first-round pick and superstar for the Windsor Spitfires. Today, Johnston was named the OHL’s Most Outstanding Player, taking home the Red Tilson Trophy, after leading the league in scoring.

Johnston, 19, was the 23rd overall pick in 2021, and like so many other prospects had missed the entire 2020-21 season because of the OHL shutdown. His training in the year off must have been spectacular, as he went from scoring 30 points in 53 games during his rookie season to 124 points in 68 games this year. It didn’t stop at the end of the regular season either; Johnston leads the OHL in playoff scoring with 37 points in 21 games and has his Spitfires up 2-1 in the league final.

Incredibly, that breakout season did not include an invitation to Team Canada’s World Junior team, something that will likely be rectified if given the chance when the event is rescheduled this summer. Of course, Johnston may also have bigger plans on his mind when August rolls around.

Like many other star draft picks, there will be a big decision for the Stars when next season starts. Johnston cannot be loaned to the AHL on a full-time basis because of his age (he only turned 19 a few weeks ago), meaning it’s either the NHL or the OHL in 2022-23. With his Windsor head coach Marc Savard getting linked to Dallas’ coaching search, perhaps the former is a real possibility for the young forward.

It’s hard to fathom what he could do if he returned for another year, seeing as the OHL already couldn’t contain him this season. Already signed to his entry-level contract, he’ll be able to play in nine games before burning the first year of the deal.

The Dallas Stars have signed prospect Wyatt Johnston to a three-year entry-level contract. The young forward was selected 23rd overall in the 2021 NHL Draft and is expected to head back to the Windsor Spitfires for the upcoming season. The team has also signed Logan Stankoven to a three-year entry-level deal. Stankoven was picked 47th overall in the 2021 NHL Draft and will be playing for the Kamloops Blazers this season.

Johnston, 18, is one of the OHL prospects that missed an entire year of development in 2020-21, waiting for the league to return from their indefinite COVID suspension. He did get some time in with Hockey Canada at a long camp provided for CHL players with nowhere to go and won a gold medal with the program at the U18 World Juniors, but still missed a great chance to make his mark on the league.

That meant when Dallas selected the 6’1″ center it was based on just 53 appearances at the OHL level, in which he scored just 12 goals and 30 points. That’s not the production most first-round picks have on their resume, but there are huge things expected from Johnston this season as he returns more physically mature than in 2020. A star for the Toronto Marlboros minor program that has produced countless NHL players including first overall picks like Connor McDavid, Rick Nash, John Tavares, and Jack Hughes, Johnston will be a player to watch for the Spitfires this season and already has his entry-level deal inked for whenever he turns pro.

Stankoven, 18, was also on that U18 team that won gold and actually heads into this season with quite a bit more production at the junior level. Though he played just six games with the Blazers last season, Stankoven now has 59 points in 72 WHL games. Though undersized–he stands just 5’8″ 170-lbs–Stankoven plays with a fearlessness that always has him around the net and battling for the puck in the corners. He was ranked 31st among North American skaters by NHL Central Scouting before the draft, and very likely would have been a first-round pick had he measured in a few inches taller. That small frame will always be an obstacle for Stankoven, but it hasn’t stopped him from producing at any level in the past.

Should both players return to junior, their contracts will slide forward, not burning the first year of the entry-level deals.