The Dallas Stars can cross the last name off of their restricted free agent list after reaching a new agreement with Roope Hintz. The Stars have re-signed Hintz to a three-year deal that carries an average annual value of $3.15MM and keeps him under contract through the 2022-23 season.  PuckPedia reports that the deal breaks down as follows:

In most cases, the salary in the final year of the contract represents the qualifying offer.  However, the most recent CBA put in a clause stating that the qualifying offer is the lower of the salary in the final year or 120% of the AAV of the deal.  In this case, 120% of the AAV is $3.78MM which means that will be what Dallas must offer to retain his rights in 2023. 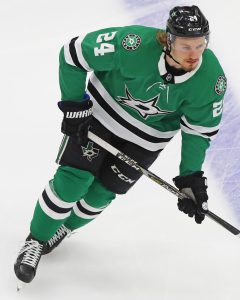 Hintz, 23, broke out in the 2019 playoffs for the Stars, showing off his blazing speed and offensive upside by scoring five goals and eight points in 13 games. That performance continued when the 2019-20 season began, with the young forward tying Jamie Benn for second in the team in goals with 19. That total came in just 60 games and Hintz was effective again in the playoffs, this time tallying 13 points in 25 games while the Stars went all the way to the Stanley Cup Finals.

Moving forward, the team will need even more from their young star, given Tyler Seguin’s injury and lack of any real improvements in free agency. Seguin is expected to be out for the first few months of the season, meaning Hintz and fellow youngster Denis Gurianov will have to carry a huge amount of the offensive burden.

If he does get more powerplay opportunity and increased minutes, this three-year contract could quickly look like quite the bargain. A $3.15MM cap hit makes Hintz the seventh-highest paid forward on the roster, just behind Radek Faksa who signed a five-year extension last month. Though Faksa is one of the league’s top defensive forwards, Hintz holds quite a bit more offensive potential and could easily push toward the 30-goal mark next season. If he does, a three-year term may seem like a mistake from his camp.

That said, a deal like this is quite a bit of stability for a second-round pick that still has just 118 regular season games under his belt. It also leaves him a restricted free agent in 2023 with the possibility of an arbitration hearing that could walk him directly onto the open market a year later. If his development continues, he could be in line for an expensive long-term extension at that point.

With new contracts done for fellow restricted free agent forwards Radek Faksa and Denis Gurianov, the Dallas Stars have just one more name to check off the list. Roope Hintz is the lone remaining RFA for the Stars and after two straight solid seasons to begin his NHL career, the young forward is due a sizeable raise from his entry-level contract. However, Dallas is running low on salary cap space. CapFriendly currently projects the club to have just $3.4MM in space for a 22-man roster. While that currently includes nine defenseman, which is not realistic, swapping a blue liner for another forward from the AHL roster will essentially cancel out. This means the Stars have approximately $3.4MM to offer Hintz in terms of AAV, and that is if they don’t plan to make any other additions to a forward corps that lost Mattias Janmark and has not re-signed Corey Perry. However, GM Jim Nill is not worried. He tells The Dallas News’ Matthew DeFranks that the team expects to get Hintz under contract “in the next week or two.” Nill claims that the two sides have had “great discussions” and are close to an extension. If Hintz signs a short-term deal similar to the two-year, $5.1MM pact signed by Gurianov, the Stars will remain under the cap ceiling and may even have room for another addition. If the two sides instead decide that a long-term deal is the better route, the AAV could climb above that of Faksa’s $3.25MM on his five-year deal, which would put Dallas right up against or over the cap. Nill seems confident that a deal will be made one way or another and that the team can sort out the rest.

Dallas Stars GM Jim Nill has finally spoken to the media about the injuries their team suffered through the return to play, and it is quite the list. From Stephen Whyno of the Associated Press, captain Jamie Benn was playing through a shoulder injury. Blake Comeau suffered a separated shoulder, Jason Dickinson suffered foot and ankle injuries. Radek Faksa broke his wrist, while Roope Hintz suffered an injured hip and fractured ankle. Esa Lindell and John Klingberg were playing through hand and shoulder injuries, respectively, while Ben Bishop had undergone knee surgery in May. Tyler Seguin, who perhaps took the most criticism for his play in the postseason, suffered a torn labrum in his hip and will be out for the next four months. Anton Khudobin, who played throughout and was the team’s playoff MVP, had surgery to relieve numbness in his hands because of a nerve issue.

Nill also announced that Rick Bowness will return as head coach and removed his interim tag. Bowness took over when Jim Montgomery left the Stars midseason and took the team all the way to the Stanley Cup Finals despite this long injury list. He’ll return to try again, though it’ll have to be without his postseason star.

Khudobin, 34, will test free agency according to Nill, who explained that their cap situation couldn’t handle bringing him back at the price he is going to command. More than just your average backup, Khudobin proved that he can be the perfect 1B for a contending team looking for elite goaltending, even if he may not be able to handle the full load of a starter. In 30 regular season games he posted a pristine .930 save percentage and would likely have won the Conn Smythe trophy if the Stars had been able to find a way to win the Stanley Cup.

The Dallas Stars have issued qualifying offers to Radek Faksa, Denis Gurianov, Roope Hintz and Joel L’Esperance, keeping their rights in the organization. The team decided not to qualify Landon Bow, Tony Calderone and Josh Melnick, making them unrestricted free agents on Friday.

The four qualified players shouldn’t surprise at all, given their huge impacts on the team this season. Perhaps L’Esperance is the name that will be less known, but he has been so dominant for the Texas Stars of the AHL that he was always going to be retained. The 25-year-old undrafted forward has 55 goals in his last 112 AHL contests while also playing 21 games in the NHL over the last two seasons.

Bow, 25, is probably the biggest surprise among the unqualified, though only because of the lack of other options in the system. The undrafted goaltender has been a full-time member of Texas for the last three seasons but posted just an .895 save percentage this year. Colton Point will be ready to take over some of the load at the AHL level but unless the Stars add another NHL goaltender and leave Jake Oettinger in the minors, they’ll need to fill out their depth chart with someone. Perhaps Bow can be brought back on an AHL deal after the dust settles.

The Predators have slipped to the bottom of the Central Division, a place that hardly anyone would have seen them being in at the start of the season.  However, some help could be on the horizon as Adam Vingan of The Athletic reports (Twitter link) that defenseman Ryan Ellis skated today for the first time since sustaining an upper-body injury back on January 1st at the Winter Classic.  Ellis is second on the team in ice time at over 23 minutes a night while his 0.72 points per game average is the second-highest of his career.

Meanwhile, Vingan adds in a separate tweet that while center Colton Sissons won’t play tonight, he could return as soon as Thursday against New Jersey or Saturday against Vegas.  He has missed the last month due to a lower-body injury.  The Predators have an open roster spot so they won’t need to send anyone down in order to activate Sissons off injured reserve.

The Dallas Stars were eliminated from Stanley Cup contention by the St. Louis Blues on Tuesday, and today held their final media availability. For one player at least, the focus was on his pending free agency and whether he would be open to return. Mats Zuccarello was acquired at the trade deadline and made quite the impact on the Stars lineup, and now the team must decide if he’s worth extending. One of the conditions on the trade was that a 2020 third-round selection will upgrade to a first if the diminutive forward re-ups with Dallas, another variable that needs to be taken into account.

For his part, Zuccarello expressed to reporters including Sean Shapiro of The Athletic that he was happy the Stars showed faith in him with the trade. He even told Matthew DeFranks of the Dallas Morning News that he likes knowing “when someone believes in you and wants you.” The 31-year old recorded three points in his two regular season games with the Stars, and 11 in 13 postseason contests.