The 2023 NHL All-Star Skills competition will take place tomorrow night, and today the league announced the full lineup of participants. Players from around the league will get to show off their unique abilities in several events, with each individual winner taking home $30,000.

*Ovechkin and Crosby are listed as “teaming up”

According to a league release, the NHL has named the first eight selections to the four divisional All-Star teams for the 2023 NHL All-Star Game in Sunrise, Florida.

The league names one player to represent each team at the game, a rule in standing since the league switched to a divisional format for its mid-season talent showcase. A public fan vote will decide the three remaining players per division next week.

Each division’s leader in points percentage after gameplay concludes on January 11 will determine coaches for these teams. The Boston Bruins have already clinched the best such number in the Atlantic at that time, meaning Jim Montgomery will be behind the bench for the star-studded Atlantic Division, arguably the league’s best contingent of talent.

The initial rosters for each division are as follows:

The most important note on these rosters is obviously that of Tarasenko’s status. The 31-year-old is on injured reserve with a hand injury, and likely won’t be able to suit up. His replacement will be named shortly.

The NHL released its Three Stars for last week, and Edmonton Oilers superstar Connor McDavid is back on top. With 11 points in four games, McDavid has extended his league scoring lead to five over teammate Leon Draisaitl and is approaching a level not seen in the league for quite some time. Mario Lemieux is the only player in the last 30 years to score at a pace better than McDavid’s current 1.88 P/GP rate over a full season. If he can keep it up, the Oilers’ captain could join a very select club that has scored more than 150 points in a single season. Only Wayne Gretzky (nine times), Lemieux (four), Steve Yzerman (one), Phil Esposito (one), and Bernie Nicholls (one) have reached that mark.

Second and third went to Dylan Cozens and Jason Robertson, a pair of youngsters that are vying for their own place among the league’s best. The Buffalo Sabres forward had nine points in four games and now has 24 in 25 games during his third season in the league. The 6’3″ center won’t turn 22 until February. Robertson, meanwhile, has been the talk of the hockey world for weeks, as he continues to pace the league in goals with 23 in 25 games. That puts him on pace to score 75, which would be the highest total since Teemu Selanne and Alexander Mogilny both hit 76 in 1992-93.

The NHL released its Three Stars for last week, with Jason Robertson leading the way. The outstanding Dallas Stars forward racked up six goals and eight points in four games and is now just one point behind Connor McDavid for the league scoring lead. His 18 goals are first, and he continues to show that he’s ready to take over as the face of the Stars. With every goal he scores, the 2017 draft class from Dallas continues to look like the stuff of legends, with Robertson, Miro Heiskanen, and Jake Oettinger picked with the team’s first three selections.

Second and third place went to Josh Morrissey and Ilya Sorokin, respectively, who had their own incredible performances. The Winnipeg Jets Morrisey is tied for third in scoring among defensemen with 23 points on the year, and continues to put his name into the Norris Trophy conversation in his seventh NHL season. Sorokin meanwhile is well on his way to some more Vezina votes as he currently holds a .933 save percentage through 16 appearances.

The NHL released its Three Stars for last week, with three Western Conference superstars making the cut. Jason Robertson is on top after scoring four goals and eight points in three games. After missing training camp, Robertson has picked up right where he left off last season and now has eight goals and 18 points in 12 games.

Second and third went to Nathan MacKinnon and Erik Karlsson, who each had their own impressive weeks. The Colorado Avalanche center had seven assists in the two games overseas, both wins in Finland, to become the league’s all-time scoring leader in games played outside of North America. Karlsson meanwhile had four goals and eight points in three games including a hat trick and has already matched his goal total from last year (ten) in just 14 games.

Forward Sonny Milano turned some heads when he signed a PTO with the Calgary Flames this fall, in part because many believed that the former Anaheim Duck would receive a full NHL contract offer from a team. Last season Milano set career highs in production, scoring 14 goals and 34 points in 66 games, but that contract offer never materialized.

Milano was recently released from his PTO after an underwhelming preseason, but that may not mean the end of his NHL journey. Per Thomas Drance and Rick Dhaliwal of The Athletic, (subscription link) the Vancouver Canucks invited Milano to their training camp before he ultimately chose to go to Calgary, and they “still like” Milano as a player. But given the complex roster and cap situation that the Canucks’ front office will need to manage in the coming days, Drance and Dhaliwal do state that the team isn’t able to acquire Milano at this moment. The bottom line, though, is that despite how rapidly his stock seemed to decline over the course of this summer and preseason, there still are teams who believe Milano can contribute in the NHL.

Now, for some other notes from the Western Conference:

There’s nothing like a little nighttime news breaking. The Dallas Stars have reached an agreement with restricted free agent Jason Robertson, signing the breakout star to a four-year contract that carries an average annual value of $7.75MM. The deal ends a standoff that had kept Robertson out of the majority of training camp but should have him ready to go in time for the start of the regular season next week.

Jason is an integral part of the present and future of our team and we’re thrilled to have him for the next four years. Since he was drafted by our organization, he has worked tirelessly to become a better player every day. His knack for scoring goals and seeing plays develop on the ice are just some of the tremendous assets that he brings to our team. He is one of the best young players in the NHL and we look forward to seeing him continue to progress.

PuckPedia provides the full breakdown of the deal, which is heavily back-loaded: 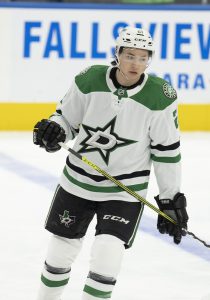 The contract will leave Robertson a restricted free agent in the summer of 2026 but one with arbitration rights. It will also mean he is due a $9.3MM qualifying offer that offseason, something that could walk him directly to UFA status in 2027.

It’s hard to explain quite how impressive Robertson has been since entering the league in 2020. The second-round pick has 125 points in 128 career games and is coming off a season with 41 goals. He sits 30th among players with over 100 appearances during that period in points-per-game, and he has done it while averaging fewer than 18 minutes a night – a number lower than every single player ahead of him on that list.

That kind of offensive production is rewarded no matter how hard a team tries to avoid it, and Robertson has landed an incredibly lucrative deal with this contract. As Matthew DeFranks of the Dallas Morning News points out, there are only two active RFA contracts in the NHL that are four years or fewer, with an average annual value of at least $7.75MM: Robertson’s new deal and Patrik Laine’s four-year, $34.8MM deal signed earlier this summer. Laine’s contract of course is buying out mostly UFA years, while Robertson will still be under (some) team control at the expiry of this deal.

The key for Dallas, is that even if Robertson continues his meteoric rise and demands a massive extension in four years, they will have quite a bit of money to work with. Not only is the salary cap expected to rise significantly by then, but Jamie Benn’s $9.5MM cap hit will also be off the books, along with Ryan Suter’s $3.65MM. Even Esa Lindell, Mason Marchment, and Radek Faksa could all be gone, leaving the Stars with plenty of flexibility to build a roster around Robertson, Miro Heiskanen, Roope Hintz (who is now eligible for an extension), and Jake Oettinger.

A deal like this cuts into the surplus value that they received from Robertson since his debut but doesn’t limit it entirely. A $7.75MM cap hit is reasonable enough that the team doesn’t need to move out significant pieces to accommodate it, while four years is long enough to really see whether Robertson is a true superstar or just a top-end player. The 23-year-old can now focus entirely on what remains of training camp and getting ready for the regular season in a few days.

There’s no better news than the kind Minnesota Wild prospect Pavel Novak shared today, announcing that he is now cancer-free. The 20-year-old forward was diagnosed in June and after undergoing treatment, released the following on his Instagram page today:

After a few months of troubles, I’m happy to share with you that I beat the cancer. There is no better feeling than to be healthy again. I would like to say thank you to all the doctors who helped me get over this. You’re my heroes. The biggest thank you to my parents and sister who always supported me and went through treatment with me. It wouldn’t work without you. Also thank you to everyone who was praying for me!

I’m really excited about what the future brings.

Novak, 20, was the 146th pick of the 2020 draft and dominated with the Kelowna Rockets last season, scoring 29 goals and 72 points in 62 games. It is not clear yet when he will return to competitive hockey but the news is certainly encouraging.

Preseason is already well underway and there continues to be no real update in talks between Jason Robertson and the Dallas Stars, according to Pierre LeBrun of The Athletic. The insider explains that the only thing coming out of either side is that daily discussions are being held.

Robertson, 23, is one of four remaining restricted free agents that needs a contract for this season, and by far the most important of the group. The young forward scored 41 goals and 79 points in 74 games last season. The Stars kick off their season on October 13 against the Nashville Predators.

When Vegas Golden Knights training camp opens tomorrow morning, defenseman Nicolas Hague won’t be there as he awaits a new contract. The Athletic’s Jesse Granger reports that he isn’t expected to be on the ice with his teammates Thursday morning at City National Arena, the team’s practice facility.

Hague is one of the few remaining restricted free agents in the NHL, alongside Toronto Maple Leafs defenseman Rasmus Sandin and Dallas Stars forward Jason Robertson as the marquee names. Granger expertly notes that Hague missing camp is more detrimental than in previous seasons, as new head coach Bruce Cassidy will be installing a completely foreign defensive system from what the Knights have been used to in past seasons. Hague, the 34th overall pick in 2017, had 14 points in 52 games last season.