The NHL has announced the 31 nominees for the King Clancy Memorial Trophy, annually presented to “the player who best exemplifies leadership qualities on and off the ice and has made a noteworthy humanitarian contribution in his community.” Last year’s winner was Pekka Rinne of the Nashville Predators.

Each team submits one nominee. This year’s are:

The Bill Masterton Memorial Trophy is given out annually to the NHL player who exemplifies perseverance, sportsmanship, and dedication to hockey. The award has been voted on by the Professional Hockey Writers’ Association since 1968, and today they announced their nominees for 2022.

Below are the nominees from each team:

After a long, successful career, Ryan Getzlaf will hang up his skates at the end of this season. The Anaheim Ducks captain announced today that he will retire following the 2021-22 campaign, having only ever played for one franchise. In a statement, Getzlaf explained:

It’s been an honor to play in the NHL and spend my entire professional career with one organization. None of this would have been possible without my family, who offered unwavering love and support each step of the way. Thank you to our owners, Henry and Susan Samueli, for leading an organization committed to success on the ice, but more importantly, to making a positive impact in our community and to those in need. 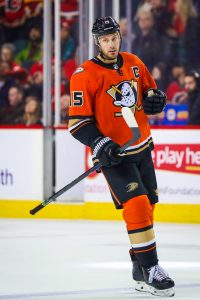 Getzlaf, 36, played 17 seasons with the Ducks, debuting in 2005 after the lockout and basically never leaving the lineup. Named captain in 2010 after the departure of Scott Niedermayer, he has been the face of the franchise for more than a decade. Now, as the team transitions to a new core, he’ll step away from the game and allow younger players like Trevor Zegras to take the spotlight in Anaheim.

It’s been an incredible career for the 19th overall pick in 2003. Getzlaf has played in 1,150 games, registered 1,013 points, and raised the Stanley Cup in 2007. He sits as the team’s all-time leading scorer, with 200 more assists than Teemu Selanne who sits in second place. In fact, Getzlaf’s 731 career assists are actually good for 51st on the all-time NHL list–he could climb into the top-50 by season’s end.

There was also plenty of international success for the big center. Twice Getzlaf took home Olympic gold medals as part of Team Canada, while also winning World Cup, World Junior, and U18 golds along the way. While he never secured a World Championship gold to enter the “Triple Gold Club,” he did serve as captain of Canada at the event, in which he participated twice. Part of the famous 2003 draft class that will undoubtedly go down in history as one of the best ever, he sits just 21 points behind Eric Staal for the top in the entire group.

Even this year, at the end of his journey, Getzlaf has shown some of his patented playmaking ability, racking up 28 assists in 49 games. While the days of his prime are long behind him, he still has been rather effective for the Ducks in his final year.

Known outside the rink for his community efforts, Getzlaf was also praised by Ducks owners Henry and Susan Samueli for his work off the ice:

We are so proud of everything Ryan has accomplished in an amazing 17 years playing for the Ducks. While we will all remember his leadership qualities on the ice, it is his community-first approach that has cemented his legacy in Orange County. In addition to spearheading the Ducks Learn to Play Program and numerous other organizational charitable initiatives, he launched his own such event with the Annual Getzlaf Shootout to benefit CureDuchenne, raising over $4.27 million to date.

Getzlaf never did win any major individual awards, though he finished second in Hart Trophy voting in 2014. Like his playstyle that always favored setting up a teammate over taking the shot himself, his career will be remembered more for team success–in the NHL and internationally–than any personal accolades.

Ducks center Ryan Getzlaf plans to discuss his future with the team soon, notes Elliott Teaford of the Orange County Register.  At this point, no decision has been made as to whether or not the 36-year-old intends to return for an 18th NHL season with GM Pat Verbeek recently indicating that Getzlaf will “remain a Duck for whenever he decides not to play anymore”.  After scoring just five goals last season, Getzlaf only has three this year but he sits second to only Trevor Zegras on the team in assists.  He has a base salary of $3MM this season with another $1.5MM in incentives and his next contract – should he choose to sign one – should check in a bit lower in terms of total cost.

More from out West:

Prior to the trade deadline, the Canucks hadn’t made any progress on a contract extension with winger Brock Boeser, reports Postmedia’s Patrick Johnston.  It has been a quiet year by the 25-year-old’s standards as he has 19 goals and 19 assists in 60 games, numbers that aren’t bad but aren’t befitting of the $7.5MM salary he’s receiving this season which stands as his qualifying offer in July to retain his rights.  It’s that situation that had Boeser in trade speculation heading into the deadline and will continue to have him in that until a new deal can be reached.  Vancouver can take him to arbitration and offer 90% of the qualifying offer but that’s as low as they can go and it’s something they can only do once with Boeser.

More from the Pacific:

Getzlaf’s having somewhat of a resurgence for Anaheim this year, already getting more points than he had last year in 48 games. His 20 assists through 29 games are most on the team. He’s had great chemistry with Troy Terry, as evidenced by the latter’s 18 goals on the year.

With Getzlaf’s absence, Comtois likely returns to the lineup in a top-six role. That’s a good sign, showing that the team trusts him to improve on his singular assist through 14 games.

The team already had Trevor Zegras on COVID protocol, so it’s a lot of offensive firepower taken out of the lineup for Anaheim at the moment.

The Anaheim Ducks have activated forward Ryan Getzlaf from injured reserve, according to The Orange County Register’s Elliot Teaford. He could be in for Saturday night’s game against Pittsburgh.

The Ducks captain originally went on injured reserve about a week ago, where he was classified as week-to-week. It’s a much swifter return to the lineup than expected.

Now 36, Getzlaf was enjoying a renaissance year with 20 points in just 23 games prior to his injury. He’s been an integral part of an unexpected resurgence for the 15-8-5 Ducks, who sit second in the Pacific Division.

Buddy Robinson, who’s played in just three games this season and is the only active Ducks forward to average under 10 minutes per game, is a likely candidate to sit out.

Getzlaf’s return is even more important considering the added absence of Adam Henrique, who’d been flanking Getzlaf along with Troy Terry this year. Vinni Lettieri and Sam Steel have filled in for the two of them alongside Terry, so the Ducks will have some lineup shuffling to do with their captain’s return.

Canucks owner Francesco Aquilini and interim GM Stan Smyl held a press conference today following the sweeping changes that were made late Sunday.  Aquilini told reporters, including Thomas Drance of The Athletic (Twitter link) that there is no timeline to try to find a replacement and that they will conduct “a thorough and exhaustive search” to find the right candidate.  It’s a similar line to what Chicago and Anaheim have used following their vacancies being created and it would suggest that Vancouver may wait until the offseason when they’re able to speak to candidates currently employed with other teams.

Meanwhile, earlier today, Ryan Kennedy of The Hockey News reported (Twitter link) that former Montreal GM Marc Bergevin is someone the Canucks are very interested in.  When asked about that, Aquilini acknowledged (via Drance) that he hasn’t approached Bergevin about whether or not he’d be interested in the position.

12/5: The Ducks have transitioned Getzlaf to the injured reserve, the team announced. In his place, the team has recalled young two-way center Benoit-Olivier Groulx from the AHL’s San Diego Gulls. Anaheim did not issue any update to Getzlaf’s condition, but the IR stint will keep him out a week minimum- though they also did not disclose if the placement was retroactive to the initial date of Getzlaf’s injury on Tuesday.

12/3: Anaheim Ducks center Ryan Getzlaf is listed as week-to-week with a lower-body injury, per a team tweet.

Getzlaf appeared to suffer the injury about halfway through the first period in Tuesday night’s 5-4 shootout win over the Los Angeles Kings. He took just four shifts and played 2:48 before exiting the game. The captain didn’t play Wednesday night against Vegas.

The 36-year-old Saskatchewan native has already eclipsed his point total from last season, scoring a goal and 19 assists for 20 points in 23 games. He was playing 19:01 per game, his most ice time in three years.

Needless to say, the leading scorer in Ducks history has been a huge part of his team’s unexpected success so far this season. He and Troy Terry have teamed up for a combined 45 points already this season, guiding the Ducks to a 13-8-3 start.

With Getzlaf out, it looks like 23-year-old Sam Steel will get a chance on the top line between Terry and Adam Henrique. The 2016 first-round pick has just five points in 17 games this year, but it’s a big opportunity for him to demonstrate he still has the ability to be an NHL player.

In what could be potentially his last season in the NHL, Anaheim Ducks captain Ryan Getzlaf set the team’s all-time points record today with his 989th point. In doing so, he passed previous record holder Teemu Selanne.

The 36-year-old center, historically known for his playmaking ability, set the record with a primary assist on a Troy Terry breakaway game-winning goal today in a 4-2 win against the Montreal Canadiens.

While there was some speculation about Getzlaf’s future playing status this offseason, the longtime Ducks captain signed a one-year, $3.0MM deal on July 28, 2021, to stay with the team. Getzlaf’s had a hot start this season, notching seven assists in 10 games while averaging over 18 minutes a game still. It looks to be a solid uptick on last year’s production, where he had just 17 points in 48 games, the lowest totals of his career.

Getzlaf’s played in every Ducks season post-lockout, he’s now had eight seasons with 50+ assists. He’s played over 1,100 games as a Duck and his 17 seasons in Anaheim eclipse Selanne’s 15 years.