The Winnipeg Jets already lost several defensemen this summer to various means, and now will be without another for the first month of the season. Nathan Beaulieu has suffered an upper-body injury and will be out for four weeks according to Murat Ates of The Athletic. Beaulieu was one of the players expected to pick up some slack this season after re-signing with the Jets for $1MM, but will have to work hard to get back into the lineup at some point in the future. The team claimed Carl Dahlstrom off waivers today to give them some more depth.

Ates also notes that Bryan Little did indeed suffer a concussion when he was hit by Luke Kunin in a game this weekend. Though there is no timetable for his return at this point, it comes as just another blow to a weakened Jets team that can’t seem to find any respite these days.

Welcome to April and the end of the NHL regular season. There are just a handful of games remaining before the 2018-19 playoffs begin and teams have started locking up their first round opponents. Still, for teams battling on the edge of postseason contention the next week may be just as important as any other. Today eyes will be drawn to the Colorado Avalanche and St. Louis Blues’ game, which very well could decide the final wild card spot in the Western Conference. The Avalanche currently hold the spot with a one-point lead over Arizona, but have this game in hand on them. As teams prepare for action, we’ll keep track of all the minor moves.

Despite having won seven of their last eight games, the red hot Calgary Flames continue to improve their lineup as the team announced it has taken center Mikael Backlund off injured reserve, while recalling Kerby Rychel, the leading scorer on the Stockton Heat. The team also sent Andrew Mangiapane and goaltender Jon Gillies back to the AHL.

Backlund has been on IR since Dec. 8 and has missed four games. The 29-year-old has five goals and 17 points in 29 games this season, but is a key figure centering the team’s second line. Veteran Derek Ryan has been filling in for him, but the infusion of Backlund should invigorate a tired team who is playing the second game of a back-to-back set. The team also brought in Rychel, who has been extremely effective in Stockton where he has already tallied 13 goals and 21 points in 25 games this season. He was acquired in an offseason trade with Montreal for Hunter Shinkaruk. Rychel made four appearances with the Canadiens last season scoring one goal and an assist.

With the healthy return of Mike Smith in goal who is expected to serve as a backup Sunday, the team had no use for Gillies, who just served as a backup Saturday. Gillies hasn’t made an appearance for Calgary this year. Mangiapane was recalled on Nov. 30 and has appeared in seven games since then, but hasn’t gotten on the scoreboard. The 22-year-old had seven goals and seven assists in Stockton.

The Vancouver Canucks may have themselves a goaltending issue after the team placed goaltender Anders Nilsson on injured reserve Sunday,  according to Rick Dhaliwal of Sportsnet. While there was no apparent injury during a game, Dhaliwal reports that Nilsson is dealing with a hand injury and had no idea how long he will be out.

It’s a big blow to a young team that has been playing beyond expectations this season as they hold a 6-6-0 record so far this year. Nilsson has been the standout goaltender in net as he has fared better than Jacob Markstrom as the 28-year-old seems to be bouncing back from a rough first year in Vancouver after signing a two-year deal during the summer of 2017. Nilsson has a 2.67 GAA and a .912 save percentage in six games this year, solid numbers for a team that many had picked to be among the bottom teams in the league this year.

While Vancouver has a top-flight prospect goaltender in Thatcher Demko sitting in Utica of the AHL, Demko has been doing just that as he has yet to make his debut this season as he is still suffering from concussion symptoms that he suffered in a Sept. 22 preseason game when he collided with Calgary’s Mikael Backlund. Dhaliwal reported Thursday that Demko has seen a specialist and is doing better, but remains at least a week away before taking the next step in his recovery.

Instead the team recalled Richard Bachman from Utica, who will serve as backup. Unfortunately, the 31-year-old veteran has struggled in Utica so far this year. In five games, he’s posted a 4.23 GAA and a .865 save percentage, suggesting the team may be in trouble if Nilsson is out for any extended time.

The Vancouver Canucks will not have free agent addition Antoine Roussel in the lineup when the regular season begins. Roussel has been sidelined since the start of training camp due to a concussion, but the hope was that without preseason action, he would have the time and rest to be ready for the real thing. However, in speaking to head coach Travis Green, Ben Kuzma of the Province has confirmed that Roussel will not be ready for the start of the season. Green gave no timeline for his return, only stating that a comeback in time for opening night had been ruled out. Green did add that young goaltender Thatcher Demko has also been dealing with concussion symptoms. He has entered the league’s concussion protocol and there is no word on when he will be ready to play or whether he will begin the season on the injured reserve or in the AHL. Kuzma writes that Demko collided with the Calgary Flames’ Mikael Backlund during last Saturday’s preseason match, but his condition deteriorated to the point of being diagnosed ahead of the Canucks’ next game on Monday night. Considering bottom-six forward Roussel and current third-string goalie Demko have been the only training camp casualties in Vancouver, the team has had relatively good luck. They hope it stays that was as the team needs a healthy and positive start to the season given their struggles over the past few years.

The Calgary Flames have made quite a few moves this offseason in hopes of reshaping their roster after a dismal second half that saw them out of the playoffs. However, the Flames new signings may have caused other issues that the team will have to deal with in a few years — namely the expansion draft.

The Athletic’s Kent Wilson (subscription required) writes that the team might be in trouble if/when the unnamed Seattle franchise has its expansion draft in 2020. Assuming all the rules are the same as they were for Vegas, Calgary will have a logjam of players at the forward position and won’t have enough spaces to protect some quality players.

Assuming there are no changes among forwards over the next two seasons, the team would likely protect or have to protect Johnny Gaudreau, Sean Monahan, Elias Lindholm, Mikael Backlund, Matthew Tkachuk, James Neal as six forwards they would likely protect. That would leave one spot open for players like Derek Ryan, Mark Jankowski, Sam Bennett, Andrew Mangiapane and Spencer Foo, which could leave several high quality players exposed to Seattle. Unless the team addresses these issues, the team may be giving Seattle a solid player.

Though obviously this group is missing some of their top options like Erik Karlsson and Henrik Zetterberg, it will also have some very interesting young players filling the gaps. Vegas Golden Knights draft pick Erik Brannstrom will be among the defense corps, and Rick Dhaliwal of News 1130 in Vancouver expects Elias Pettersson will be added soon.

After Canada announced their first 18 players yesterday, Sweden has now given us 10 NHL names that will suit up for them at the upcoming World Championships in Denmark. Like usual, their group will include several professional players from the SHL—though top prospect Rasmus Dahlin has already said he won’t be attending.

The confirmed NHL players are below:

One of the biggest names expected to be on the 2018 free agent market has instead decided to stay put. The Calgary Flames announced this evening that they have re-signed center Mikael Backlund to a six-year, $32.1MM extension. The deal carries a $5.35MM cap hit, while TSN’s Darren Dreger adds that the first two years of the extension carry a $2MM signing bonus, while the final four are purely salary and the deal contains a No-Movement Clause in the first three years and a Modified No-Trade Clause for the last three years.

This appears to be a very favorable deal for the Flames. Backlund, 28, has spent his entire career in Calgary after being drafted out of Sweden in the first round of the 2007 NHL Draft. Backlund has since flown under the radar, quietly becoming one of the top two-way forwards in the NHL through his 519 games for the Flames. He is also capable on offense, with 104 goals and 158 assists for 262 career points thus far, including a career-high 53 last season. He has kept up his high-level play at both ends of the ice in 2017-18, on pace for 48 points and considered a candidate for the Selke Trophy with some truly impressive possession metrics.

Backlund has proven himself to be a perfect fit as a middle-six center for the Flames and will now hold down that role into the foreseeable future. While Brian Burke, Brad Treliving, and company are surely excited about the extension, the news will leave many other teams discouraged. Backlund was ranked seventh in PHR’s Midseason Free Agent Power Rankings – and had the potential to move up – while ranking second behind only John Tavares among centers. With Tavares also expected more likely to resign than go elsewhere, teams with needs down the middle could soon see their top two targets off the board. Backlund was also set to cash in on his prime position in free agency this summer, so his reasonable extension is even further proof that he was happy to stay in Calgary long-term.

The Flames and representatives for pending unrestricted free agent center Mikael Backlund have picked up talks regarding a contract extension recently, reports Postmedia’s Eric Francis.  However, Backlund himself isn’t overly thrilled that negotiations are occurring midseason: 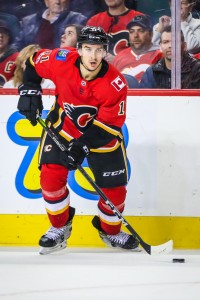 The 28-year-old is certainly helping his case for a big contract whether it’s with the Flames or elsewhere for next season.  He’s on pace for a second straight 50-point campaign while he’s averaging a career-best 19:15 per night, second among all Calgary forwards.  Included in that is 2:25 per night shorthanded which is more than any other Flames attacker.  As a result, he will be coveted not only for his offensive abilities but also for his defensive acumen.

Francis reports that Backlund is seeking a deal between $5MM and $6MM per year on a five or six-year contract, money that would come close to the pact that Kyle Turris signed upon being traded to Nashville (six years, $36MM).  That would also represent a considerable raise on the $3.575MM he’s earning this season.  It’s reasonable to expect that he’ll have no trouble garnering a contract in that range if he is unsigned come July based on precedents around the league.

Meanwhile, GM Brad Treliving declined to comment on the status of discussions or the asking price, instead simply stating that their goal is to re-sign Backlund.  He would be wise to get a deal done before July as if he hits the open market, it wouldn’t be surprising to see the price go even higher with demand expected to greatly outweigh supply for centers in free agency.