As August begins and we get closer to the end of arbitration hearings and contract holdouts, teams continue to fill our their organizational depth charts. Here are some minor moves from around the league. We’ll keep updating as more come in:

With the NHL season now just a month away, it’s time to look at what each team has done this summer and what to watch for in the year to come. Today, we focus on the St. Louis Blues.

Player To Watch: G Jake Allen — The team has upgraded its offense, already had a solid defense and has several of their top prospects banging on its door, hoping to get into their rotation this year. What they didn’t do much with is their goaltending. Allen, once considered the franchise goalie, has now struggled for more than a full season, but with three years at $4.35MM per season still on the books, he’s not going anywhere this year.

The 28-year-old netminder struggled down the stretch during the 2016-17 season, but his consistency got even worse last year when he posted a .906 save percentage and a 2.75 GAA in 59 games. The team was forced to use Hutton on many occasions to replace the struggling goaltender. In hopes of redeeming his job, Allen has said that he has changed some of his training methods this summer and hopes to come into camp and prove that he is the starting goaltender.

The team had better hope that he can, because the team lost Hutton to the Buffalo Sabres in the offseason and replaced him with Johnson, who struggled in a one-year stint in Buffalo, albeit behind an atrocious defense. The team does have prospect Ville Husso waiting in the AHL, but many believe he still needs at least one year of seasoning there before he can challenge Allen for his job.

Key Storyline: The offense has been thoroughly upgraded in the last few months and it will be up to the team to find a way to gel and make it work. One key story will be whether they can get the breakout performance that everyone in the NHL has been waiting for from Vladimir Tarasenko. The winger posted three impressive seasons coming into last year, including a 37, 40, 39-goal seasons. However, while the 26-year-old still had a solid season last year, his 33 goals was a disappointment for a player who many felt was closer to a 40-goal scorer than a 30-point scorer. 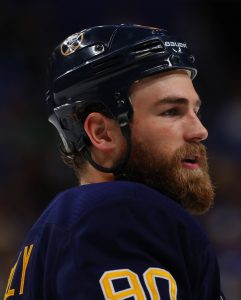 One possibility to Tarasenko’s season could come down to the addition of O’Reilly. Adding a top-line center will be critical and if the two can co-exist, then you might see the development of a superstar as Tarasenko and Paul Stastny had limited chemistry together. There is also a likelihood that Maroon, who played together with Connor McDavid in Edmonton for a while, could add his physicality to that first line and give Tarasenko an even better chance to have a big season.

Overall Outlook: Looking at the massive changes to the team, especially at the forward position means the team expects to win now. The franchise has put a lot of expectations on head coach Mike Yeo and the team as they are expected to not just make the playoffs, but compete for the Central Division title. That’s a tough chore for any Central Division team if you assume that the Nashville Predators and Winnipeg Jets will likely assume the first two spots in the division. That leaves just two playoffs spots for the rest of the division that includes the Minnesota Wild, who have been to the playoffs for six straight years, an improving Dallas Stars team, a young impressive Colorado Avalanche franchise and the Chicago Blackhawks who are trying to prove that their run isn’t over just yet. If the team fails to impress early on, that could put Yeo on the hot seat.

The Detroit Red Wings have announced another set of signings today, adding minor league depth in the form of forwards Chris Terry and Wade Megan, defenseman Jake Chelios and goaltender Harri Sateri. Terry has signed a two-year deal, while Megan, Chelios and Sateri have signed on for one year. Salary terms have not yet been disclosed.

Detroit is expected to graduate several players from the Grand Rapids Griffins this season, and needed some veteran additions to keep the minor league team competitive. Terry especially will be a huge boost to the offense, after his 71-point 2017-18 with the Laval Rocket. That was on the worst team in the AHL, something that the Griffins don’t project to be this season.

Sateri, fresh off his NHL debut in Florida, will provide some more goaltending depth for the Red Wings as well. Though they now have Jimmy Howard and Jonathan Bernier at the NHL level, Jared Coreau left the organization and they needed some more experience in the minor leagues. He’ll fight for the full-time starter role there, and try to work his way back up to the NHL should any injuries arise.

The St. Louis Blues just narrowly missed out on making the playoffs this season, losing in regulation to the Colorado Avalanche in their regular season finale – the only result that could have eliminated them from the postseason picture. To add insult to injury, the Blues have also played the 2017-18 season without an AHL affiliate, leaving fans without the consolation prize of at least watching a team of St. Louis prospects make a playoff run. Nevertheless, the team has assigned goalie Ville Husso and defenseman Chris Butler to the San Antonio Rampage, the team with the majority of the Blues’ minor league prospects. Yet, the Rampage sit in last place in the extremely tight AHL Pacific Division with just three games remaining. Dejected Blues fans may have to follow Beau Bennett and Wade Megan with the Chicago Wolves or Jordan Binnington with the Providence Bruins if they want a horse in the race come AHL playoff time.

The context behind the St. Louis Blues’ call-up of Ivan Barbashev is now clear. The Blues have announced that Jaden Schwartz suffered a right ankle injury in yesterday’s game against the Detroit Red Wings. He will be re-evaluated in six weeks, during which time the team will have to lean on Barbashev or another AHL forward as his replacement.

This is a devastating blow for the red-hot Blues. Schwartz has struggled with injuries in the past but has always produced at a high level when healthy. Schwartz has 35 points in 30 games and an incredible +23 rating. Schwartz is currently second on the team in points, goals, and plus/minus behind only linemate Brayden Schenn and tied with Schenn for assists. His impact on special teams can also not be understated.

Schwartz’s absence will be quite the test for St. Louis. While they were fortunate to get Patrik Berglund back from injury before Schwartz went down and have also seen surprising production from the likes of Vladimir Sobotka, Scottie Upshall, and Dmitrij Jaskin, it will still be very difficult to make up for the loss of Schwartz for the next month and a half. Barbashev, the presumptive replacement for Schwartz as a top nine forward, had been held scoreless so far in the NHL this season and Wade Megan and Tage Thompson had the same luck in their short stints. One of those three young forwards needs to step up or else the Blues could see their lead in the Central slip away in no time, with the Nashville Predators and Winnipeg Jets right on their tail.

There are only five games on tap today, but teams may use their time to make some roster adjustments in preparation of a new week of play. Keep up with everything right here:

As usual, Saturday is a busy day around the league with 13 games on the schedule.  Here’s where we’ll keep tabs on today’s movement as teams get their rosters set before puck drop.

Injury news out of Buffalo today has Sabres’ forward Jacob Josefson out “week-to-week” with a lower-body injury sustained on Sunday. Josefson had been held scoreless through the first six games, but had been a key penalty killer for the team. The 26-year old signed a one-year, $700K contract with the Sabres this summer after not receiving a qualifying offer from the New Jersey Devils, and is looking to prove that he can be an effective bottom-six player for the team long-term.

Week-to-week doesn’t instill confidence that he’ll be back anytime soon, so the Sabres will have to find another way to fill out their forward group. Today at practice Sam Reinhart was back at center, with Justin Bailey jumping up beside Ryan O’Reilly on the second line. The Sabres are looking for some answer to their early season struggles as they take on Vancouver tomorrow night.

After sitting out the first few weeks with a hand injury, Alex Steen has been activated by the St. Louis Blues and will be in the lineup tonight when they take on the Chicago Blackhawks. To make room for the returning Steen, Wade Megan has been placed on waivers. Megan had played in just one game with the Blues, and will likely be assigned to the AHL should he clear waivers tomorrow.

Steen is an important part of the Blues’ forward group, and he’ll rejoin a team that has lost a pair of matches after going 4-0 to start the year. The team has struggled to find much secondary scoring this season, something that Steen will look to change. With his return, the forward depth should improve as players are slotted into more familiar roles. Still, with Patrik Berglund, Robby Fabbri and Zachary Sanford out long-term, the team will need to get more from their bottom-six.

Megan is an AHL veteran who made his NHL debut last season, but was never likely in the plans as much more than a depth option. His 2016-17 season was impressive, with 66 points for the Chicago Wolves, but he hasn’t been able to carry that scoring ability over to the next level. He’ll serve as a valuable extra piece waiting to get recalled should he make it through waivers.

The Blues will be getting center Kyle Brodziak back in their lineup earlier than expected.  The team announced that they’ve activated him off of injured reserve two weeks ahead of schedule.  Brodziak suffered a foot injury three weeks ago and was expected to be out until the end of the month but he recovered quicker than expected.  The 32 year old has ten points (4-6-10) in 47 games with St. Louis this season.  To make room for him on the roster, the team assigned center Wade Megan back to Chicago of the AHL.

Still with the Blues, center Paul Stastny is expected to travel with the team to Buffalo in advance of their games against the Sabres tomorrow, notes Jeremy Rutherford of the St. Louis Post-Dispatch.  He remains day-to-day for the time being with a lower body injury.  If Stastny is ready to return, another player will have to be sent back to the AHL to make room for him.

Other injury updates from around the league: