Waivers are coming fast and furious as teams have to have their final rosters submitted by the evening of Tuesday, October 3rd. After Jordan Nolan was claimed a couple of days ago, everyone on waivers yesterday cleared. Here is the list from today thanks to Renaud Lavoie of TVA Sports, which contains quite a bit of NHL experience.

There are also bound to be a few recalls over the next few days, as injuries and poor performance lead teams to reconsider their original decisions.

After rumors of the deal yesterday, the Anaheim Ducks have announced the signing of a one-year extension for young winger Logan Shaw. Though the team has not released the details, Renaud Lavoie of TVA Sports reports that the deal is one-way and will see Shaw earn $650,000 next season. 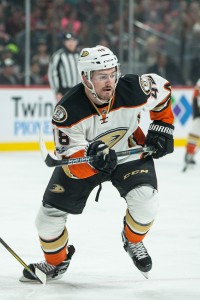 Shaw was the return for Michael Sgarbossa earlier this season from Florida, and has turned into an effective bottom-six penalty killer for the Ducks. In 43 games, he has just five points and has never been much of a scoring threat even going back to his junior hockey days. Instead, he is a big body who can skate well enough to effectively defend and give the team a bit of energy.

He also gives Anaheim another body to expose in the upcoming expansion draft, not unlike Chris Terry for Montreal. While the Ducks will likely have to go the eight skaters route leaving them perfectly covered in the 70/40 expansion requirements up front, if they can work out a deal with Vegas or move one of their defensemen prior to the draft, they may have been stuck with just Jared Boll meeting the requirements up front. They now have options as Shaw and Boll will definitely be left exposed.

The Montreal Canadiens have re-signed minor league forward Chris Terry to a one-year extension that will keep him in the organization through 2017-18. Though he hasn’t played much in the NHL this season, Terry will help to fill one of the forward requirements for the Canadiens at this summer’s expansion draft. He played 68 games last season for the Carolina Hurricanes and 14 this year for the Habs, making him eligible for the 70/40 requirement—not that the team was going to have much trouble, it is always good to have more options heading into the draft.

Terry was drafted in the fifth round a decade ago, and has turned into a prolific scoring winger in the AHL. With 351 career minor league points, Terry ranks among the top in the AHL each season. His NHL career hasn’t turned into much, though he did play regularly on Carolina the past two seasons. With just 38 points in 152 games, and close to turning 28 years old, he seems destined for a minor-league career.

More deals like this will be made over the next few months as teams finalize their expansion lists. The trade deadline changed a lot of rosters despite mostly dealing in rental players. The draft has provided players like Terry with a unique opportunity to sign a deal (with Eric Engels of Sportsnet even reporting that it is a one-way contract) when one may have not presented itself under normal circumstances.

Good All-Star morning folks, even on this short mid-season break teams aren’t holding back from their roster shuffling. Here are all the minor transactions of the day.

Here is where we’ll keep track of today’s minor transactions: