On November 17, the Winnipeg Jets will be honoring two of the greatest players in franchise history (or at least, Jets history, both this iteration and the previous one). Teemu Selanne and Teppo Numminen will be inducted into the Jets Hall of Fame, joining Bobby Hull, Ulf Nilsson, Anders Hedberg, Dale Hawerchuk, Ab McDonald, Lars-Erik Sjoberg, Randy Carlyle, and Thomas Steen.

It wouldn’t be right to do it against any other team than the Anaheim Ducks, where Selanne went from incredible youngster to NHL legend. In just 231 games for the Jets, Selanne scored 147 goals, including 76 in his rookie season, a record that has yet to be broken (and is 23 ahead of second place, Mike Bossy). Numminen meanwhile played 547 games for the Jets and continued on with the organization after it moved to Phoenix, playing a total of 1,098 with that franchise. The steady-as-she-goes defenseman was one of the most consistent two-way players in his era, racking up 637 points in 1,372 career games.

In what could be potentially his last season in the NHL, Anaheim Ducks captain Ryan Getzlaf set the team’s all-time points record today with his 989th point. In doing so, he passed previous record holder Teemu Selanne.

The 36-year-old center, historically known for his playmaking ability, set the record with a primary assist on a Troy Terry breakaway game-winning goal today in a 4-2 win against the Montreal Canadiens.

While there was some speculation about Getzlaf’s future playing status this offseason, the longtime Ducks captain signed a one-year, $3.0MM deal on July 28, 2021, to stay with the team. Getzlaf’s had a hot start this season, notching seven assists in 10 games while averaging over 18 minutes a game still. It looks to be a solid uptick on last year’s production, where he had just 17 points in 48 games, the lowest totals of his career.

Getzlaf’s played in every Ducks season post-lockout, he’s now had eight seasons with 50+ assists. He’s played over 1,100 games as a Duck and his 17 seasons in Anaheim eclipse Selanne’s 15 years.

The 2022 Olympic Winter Games are coming quickly and there is no definitive answer yet on whether the NHL will participate. That could be changing soon, as hockey insider Frank Seravalli reports that the league has received a verbal commitment from the IOC to fund travel and insurance, one of the biggest sticking points in previous negotiations. Seravalli notes there is still a lot of work to be done, including negotiating whether the NHL will be allowed to use game footage and other promotional material, something the Olympic committee has long been against.

Progress is progress though and it will be welcome news to hockey fans all over the world. Best-on-best hockey always creates a memorable event, whether at the Olympics or World Cup, and the lack of NHL participation in the 2018 Games robbed some of a chance to compete for their country. Players like Auston Matthews and Connor McDavid who are now five and six years into their NHL careers still haven’t had a chance to represent their nations on the Olympic stage.

The 2022 Games are scheduled to begin on February 4, 2022, meaning there would need to be a stoppage to the NHL schedule while the league’s best go to Beijing. In 2014, the last time the NHL participated, Canada took home the gold in a 3-0 win over Sweden. The U.S. finished off the podium entirely, downed in the bronze medal game by tournament MVP Teemu Selanne of Finland.

In 2018, without the NHL involved, the Olympic Athletes from Russia took home gold, defeating Germany in the gold medal match. That Russian team included several former NHL talents like Ilya Kovalchuk and Pavel Datsyuk along with several names who would make their debuts in the coming years, like Ilya Sorokin, Igor Shesterkin, and Kirill Kaprizov.

The Hockey Hall of Fame has announced their 2017 class, that includes both players and builders. Teemu Selanne, Paul Kariya, Dave Andreychuk, Mark Recchi and Danielle Goyette form the player class, while Clare Drake and Jeremy Jacobs are heading in as builders.

Selanne was on the ballot for the first time, and was an absolute lock for induction. With 1,457 points in 1,451 games, Selanne ranks 15th all-time in scoring and is arguably the greatest Finnish-born player ever to play in the NHL. Right from the start, with his record-setting 76 goal rookie campaign the “Finnish Flash” was a dominant presence in the league able to out-skate and out-shoot almost anyone in the league. Even at age 36 he was a dominant player, scoring 48 goals and 94 points and leading the league in game-winning goals. One of only 19 men to score more than 600 goals in the NHL, Selanne lit the lamp 684 times and sits just outside the top-10. Always considered just as good of a person off the ice as he was a player on it, his impact along with Kariya on the Anaheim Ducks (of both the plain and Mighty variety) has been immeasurable. 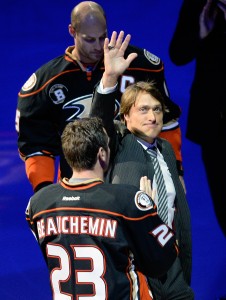 In a perfect touch, Kariya will go in alongside his long-time friend and teammate. The two put the Mighty Ducks of Anaheim on the map in the 90s, and later signed to play together in Colorado. Though his career was affected by concussion issues and ended when he was 35, Kariya goes down as one of the most determined skaters of all-time. Blessed with incredible skill, Kariya never stopped working and would create chances out of nothing just with his tenacity. While he’s waited for some time to see his name in the Hall of Fame, it is well deserved. With 989 career points (in 989 games), he ranks 87th all-time but is one of a very select group to record a point-per-game (h/t James Mirtle of The Athletic) since he entered the league.

Andreychuk is another that has had to wait quite some time, but will ride his 640 career goals and 1,338 points right into the Hall. An incredible net presence, capable of finding pucks and immediately depositing them behind goalies, Andreychuk scored more than 40 goals four times in his career and ranks 14th all-time. A captain of the Tampa Bay Lightning to finish his career, Andreychuk would finally win the Stanley Cup at age 40. His legacy is remembered fondly in several different cities, but perhaps best in Buffalo where he formed one of the greatest lines in NHL history with Pat LaFontaine and Alexander Mogilny for a brief time.

Recchi has a similar story, lasting into his forties and logging some of the greatest offensive numbers of all-time. With 1,533 points, Recchi ranks 12th on the career list and won three Stanley Cups with three different teams. Though he did have some incredible years at the beginning of his career, Recchi is a testament to consistency and adaptability. Able to fill several different roles throughout his career, he was always among his team leaders in points and logged huge minutes in a two-way role. One of the greatest fourth-round picks of all time, Recchi had an impact in many different cities around the league including both Philadelphia and Pittsburgh. Two different stints in both cities are sure to create some arguments over which franchise he belongs two, while Montreal and Boston each have their own claims.

Goyette is the latest from the outstanding Canadian women’s group that was so dominant on the international stage for so long. The sniping winger took home three Olympic golds, an Olympic silver and eight World Championship golds during her illustrious career with Team Canada, and has been the head coach at the University of Calgary—where amazingly she coached former teammate Haley Wickenheiser—for the past decade. Her influence on Canadian women’s hockey is almost unmatched.

Today is the skills competition portion of the NHL All-Star weekend, and the league has combined the skill of the sport with the star power of Hollywood. The league released the rosters for the Celebrity Shootout, packed with former NHL stars as well.

The league will start with the Celebrity Shootout which features celebrities like Tim Robbins and Cuba Gooding Jr. Justin Bieber was name highlighted by the NHL. Both teams will wear patches honoring Alan Thicke who passed away in December. Thicke was a noted actor for his work on the 80’s television show Growing Pains, and was also a diehard hockey fan.

The Celebrity Shootout is scheduled for 4:15 pm CST. Below are the rosters for both teams.

A little more than a year ago, Chicago and Toronto made a small trade of underperforming players that wound up yielding the Blackhawks a productive forward in Richard Panik, a move that is really paying dividends now, writes Chris Hine of the Chicago Tribune.

Panik has played several roles this season, spending time in the bottom six in a defensive role while logging plenty of minutes on their top line as a scorer well.  He has responded by matching his career high in goals with 11 and setting a new career best in points with 20.

The 25 year old has provided the Blackhawks with solid value on the salary cap as well as he is earning just $875K.  He is slated to become a restricted free agent this summer.

Meanwhile, the player Chicago gave up, Jeremy Morin, is now on Tampa Bay’s farm team.   The Leafs flipped him to San Jose last February and then the Sharks failed to tender him a qualifying offer back in June, making him an unrestricted free agent.  It may have been a minor move at the time but suffice it to say, the Blackhawks came out on top of that one.

Other news and notes from around the hockey world:

Wayne Gretzky had some high praise for Connor McDavid on Tuesday night. In an appearance on the NHL Network (transcribed by Chris Nichols of Today’s Slapshot), Gretzky called McDavid the “catalyst” of the Oilers. Edmonton is off to a 9-4-1 start, tied with Chicago for tops in the Western Conference, and McDavid is a major part of that. He is tied for second in the NHL with 17 points.

Tuesday night marked the first time McDavid, the future face of the NHL, took on Sidney Crosby, the current face of the NHL. The Oilers captain posted three assists while Crosby was held pointless for the first time this season. McDavid won the battle, but his team lost the war on a Benoit Pouliot own-goal with less than two minutes remaining.

Despite his high praise for McDavid, Gretzky still believes Crosby is the best player in the NHL, until “somebody knocks him off that mantle.”

McDavid leads the way for several highly-skilled young players like the top two selections from last June’s draft: Auston Matthews and Patrik Laine. Laine is leading the NHL with 11 goals in 14 games; he already has two hat-tricks in his young career, earning him the nickname “Hat-trick Laine”.

ESPN’s Joe McDonald relayed a story from the World Cup, where Laine represented the Finns. During a team practice, Laine ripped a shot past Bruins goalie Tuukka Rask. Rask admitted he never even saw the puck go past him. Laine’s 11 goals in 14 games ties former Winnipeg Jets sniper Teemu Selanne’s record for goals in his first 14 NHL games. While Laine may not reach Selanne’s mark of 76 goals this season, he will certainly be among the NHL rookie leaders.

In Toronto, Matthews set an NHL record with a four goal outburst in his debut, but has slowed down slightly since then. He has six goals and 11 points in 13 games on a rebuilding Maple Leafs squad.

On the NHL Network, Gretzky complimented a few young players, including McDavid and Matthews for accepting “a responsibility of being that person for their city.”

Still in their prime, Crosby and Alexander Ovechkin are two of the best player in the NHL. With McDavid, Matthews, and Laine now in the picture, the future appears to be in very skilled hands.