The Edmonton Oilers have shot up the North Division standings of late, winning their last four and passing every Canadian team not named the Maple Leafs. They’ve had all that success without the services of young defenseman Ethan Bear, who hasn’t played since January with a head injury. Bear was struck with the puck (while sitting on the bench) and has been on injured reserve for the last three weeks. That IR stint ended today as the Oilers activated him ahead of tonight’s match against the Vancouver Canucks.

Bear, 23, had an outstanding season in 2019-20, racking up 21 points in 71 games and actually finishing tenth in the Calder Trophy voting as the league’s best rookie. While this year wasn’t going quite as smoothly in the early going, he was still averaging more than 20 minutes a night for the Oilers as an efficient puck-moving option. His return will only strengthen a back end that has still allowed too many goals against, getting the puck quickly up to those all-world forwards.

To make room, the team has moved William Lagesson to injured reserve, likely retroactive to his last game on February 15. Even if he was healthy and playing, most Oilers fans would happily swap him out for Bear.

Nov 23: Lagesson has been reassigned from HC Vita Hasten to Kristianstads IK, another team in the Swedish second league. He is still expected to return at the start of NHL training camp.

Nov 4: The Edmonton Oilers have signed William Lagesson to a new two-year contract, which will be two-way in the 2020-21 season and one-way in 2021-22. The contract carries an average annual value of $725K at the NHL level. Lagesson had been playing with HC Vita Hasten in Sweden while he waited for a new deal with the Oilers and will remain there until the start of 2020-21. 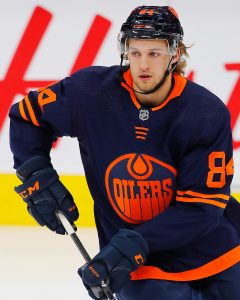 It’s been a long and winding road for Lagesson, who was a fourth-round pick of the Oilers back in 2014. Selected out of Sweden, he immediately came to North America but not to sign with Edmonton. Instead, Lagesson played a season in the USHL for the Dubuque Fighting Saints, before heading to college at UMass Amherst.

After two seasons at the NCAA level and a pair of appearances at the World Junior Championship, Lagesson signed with the Oilers but still didn’t enter their development system. Instead, he went back to Sweden and played a season on loan with Djurgardens of the SHL. It was only 2018 when he finally came back to North America to play for the Oilers organization, suiting up for an entire season with the Bakersfield Condors. Last year, he was back with the Condors but also made his NHL debut, playing eight games with the Oilers.

Currently dominating the competition in Sweden’s second-tier—with nine points in eleven games—Lagesson seems poised and ready to compete for a full-time NHL roster spot when things resume for the upcoming season. Remember, the Oilers could be without Oscar Klefbom for a good chunk of, if not the whole season and don’t have a ton of experienced depth at the minor league level. In fact, with this move Lagesson becomes just the 13th defenseman in the entire organization signed to an NHL deal, and that includes several still on their entry-level contracts.

That number should increase by at least one in the coming week, as the Oilers still have Ethan Bear to sign. He is the final restricted free agent that needs a contract before the season starts and is coming off a breakout year in which he proved himself to be a top-four option for the team.

Edmonton restricted free agent defenseman William Lagesson has signed a contract, but not with the Oilers. Lagesson has inked a one-year contract with HC Vita Hasten of the Allsvenskan, the Swedish second tier league. The team announced the contract and emphasized that the deal covered the entire 2020-21 season, but don’t expect the promising young defender to follow through on that commitment. PuckPedia reports that the contract contains an NHL Out Clause, allowing Lagesson to leave Vita Hasten once the NHL season begins, assuming he has a contract. By all accounts, the Oilers are planning to re-sign the 24-year-old RFA, who played in eight games in Edmonton last season. A standout in the Swedish junior ranks and at the University of Massachusetts, Lagesson doesn’t project as a top-four defenseman for the Oilers, but is a valuable, two-way depth option. Expect Lagesson’s contract with Vita Hasten to essentially act as a loan, with the defenseman in Edmonton camp as soon as it opens.

With the recent release of the Edmonton Oilers training camp roster, the news has also come out that defenseman Mike Green has chosen to opt out of the Return to Play Plan, according to Edmonton Journal’s Derek Van Diest. The 34 year old, acquired at the trade deadline from the Detroit Red Wings, was brought on board to bring veteran experience to the team’s defense for their playoff run.

“Due to the uncertainties surrounding COVID-19 and after much consideration, I’ve decided for deeply personal family health reasons, not to participate in the return to play,” Green said in a statement. “This has been a hard decision knowing I’m going to miss the opportunity to compete in the playoffs with a Stanley Cup contender. I wish the best of luck to the guys and I appreciate the Edmonton Oilers support.”

Green was supposed to step in on the team’s third pairing defense after being picked up for Kyle Brodziak and a conditional fourth-rounder. That conditional fourth-rounder would have become a third-round pick had Green played in 50 percent of the team’s playoff games, which will obviously not happen now. In the end, he only played in two games for the Oilers after sustaining a knee injury after that second game that knocked him out until play was suspended.

Edmonton will look to Kris Russell and Matthew Benning to play on that third pairing. However, there is also opportunity for some of the younger Oilers to win a spot, including Evan Bouchard and William Lagesson. Bouchard, the team’s 2018 first-round pick might be able to win a spot in the Oilers’ lineup after a solid rookie campaign in the AHL this season, while Lagesson did manage to get into eight games with Edmonton earlier this season.

The Coyotes have been looking for some stability for a new arena for years now and while they’ve seemingly come close to finding a long-term solution, nothing has materialized and they are now playing out of a year-to-year lease in Glendale.  Recently-hired team president Xavier Gutierrez told ESPN’s Emily Kaplan that this is his top issue after team owner Alex Meruelo called it “priority one through 10”.  Arizona has already agreed to play out of Glendale for next season but Gutierrez indicated that they are evaluating whether or not that’s the best approach or if a mid-term agreement would be more beneficial while they pursue a more feasible arena location.