Nicholas Baptiste found new life with the Texas Stars this season, getting his career back on track with 23 points in 34 AHL games. The 25-year-old forward will now head overseas to play for Ilves in Finland, where he could find even more offensive success. A third-round pick of the Buffalo Sabres in 2013, Baptiste played 47 games with the team between 2016-18, scoring ten points. He’s been stuck in the minor leagues ever since, suiting up for the Milwaukee Admirals, Toronto Marlies and Belleville Senators in addition to the Stars.

An unrestricted free agent that was playing under an AHL deal, Baptiste is still young enough to go to Europe, boost his value and potentially return on an NHL contract down the line. He’ll have to perform, obviously, but this may not be the last we’ve heard of Baptiste in North American pro hockey.

The Texas Stars have added six players on AHL contracts for the 2020-21 season, bringing in a ton of experience and depth for their minor league run. Nicholas Baptiste, Cole Schneider, Nick Moutrey, Derek Barach, Nikita Scherbak have all joined the team, while Josh Melnick re-signs after spending last season in Texas.

These aren’t just minor league depth pieces, as Baptiste, Schneider, and Scherbak actually all have NHL experience. Baptiste, 25, was a third-round pick of the Buffalo Sabres in 2013 and played 47 games at the highest level. He split last season between the Toronto Marlies and Belleville Senators, scoring 11 points in 35 games.

Schneider, 30, has just six games of experience at the NHL level but has been a force in the AHL for years. Last season he recorded 18 goals and 46 points in just 54 games for the Milwaukee Admirals.

Scherbak, 25, may be the most interesting name of the bunch, given he was a first-round pick in 2014. Selected 26th overall by the Montreal Canadiens, he received 37 games at the NHL level but never could quite make his mark. After spending some time in the Los Angeles Kings system, he left for the KHL last season and recorded 11 points in 31 games.

Texas will begin their season on February 5 against the Iowa Wild.

Like always, we’ll keep track of all the training camp cuts right here. Keep checking back to see the updated list:

As August continues and we get further into contract negotiations, teams continue to fill our their organizational depth charts. Here are some minor moves from around the league. We’ll keep updating as more come in:

Free agency is now just a few days away and there are quite a few prominent players set to hit the open market while many teams have key restricted free agents to re-sign. Toronto has already locked up a few important names, but still has plenty of work to do before knowing what next season’s roster will look like. Here’s a closer look at their free agent situation. 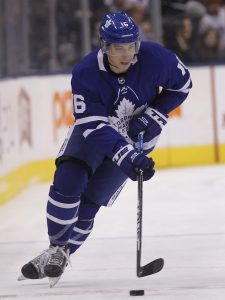 Key Restricted Free Agent: F Mitch Marner — If this article had been written yesterday this section would have included the likes of Kasperi Kapanen and Andreas Johnsson, but it always all came down to Marner. The entire Maple Leafs’ offseason is revolving around him at the moment, with the uncertainty of when Toronto will sign his next contract. That is of course if it’s signed at all by the Maple Leafs, as offer sheet speculation has never been as high as it seems to be regarding the 22-year old star. A huge part of that speculation is the market he plays in, but Marner is reportedly seeking a huge raise that would make him one of the (if not the) highest paid wingers in the league.

There’s good reason for Marner to believe in himself and his abilities. The undersized forward dominated the OHL before and after the Maple Leafs selected him fourth overall in 2015, and he began his NHL career without missing a step. 61 points his first season, 69 his second and a whopping 94 points in 2018-19 made him one of the most lethal offensive weapons in the game, even if that last jump was at least in part due to the addition of John Tavares. Not only is Marner an incredible playmaker, but he also took on a penalty killing role with the Maple Leafs this season and became one of head coach Mike Babcock’s most trusted defensive forwards.

None of the reports and rumors from either side mean much to GM Kyle Dubas and Marner’s agent Darren Ferris, who need to work out a deal at some point if the Maple Leafs are going to proceed with the rest of their offseason. The team currently has just $6.9MM in cap space but can exceed the limit during the offseason or move Nathan Horton to long-term injured reserve. That still doesn’t leave much room for free agent additions because, as Dubas told Chris Johnston of Sportsnet today, they “have got to save space for Mitch.”

Key Unrestricted Free Agents: D Jake Gardiner — If the Maple Leafs had more cap space there is no doubt that they would be trying to keep Gardiner in town, given the state of their defense corps without him. Even though he’s not the right-handed option they so desperately need, his depature—and the potential trade of Nikita Zaitsev—could leave them with just three proven NHL options in the whole organization in Morgan Rielly, Jake Muzzin and Travis Dermott. That’s a horrendous position to be in, even if it is with several months remaining before the start of the year. Gardiner though will likely be priced out of the Maple Leafs’ range given his history as a top puck-moving option. Though he is derided by many for the occasional what-was-he-thinking giveaway, Gardiner has amassed 245 points in his 551 game career including a career-high of 52 in 2017-18. An excellent offensive catalyst at even-strength, he’ll likely earn himself quite the payday on July 1.

D Ron Hainsey — The other big departure from the Maple Leafs blue line is Hainsey, even if he did turn 38 in late March. His agent confirmed that he will continue playing as long as there is interest, and after a +30 season playing alongside Rielly on the top pairing there won’t be any shortage of teams calling. Hainsey is not the offensive player he once was—remember that years ago he was an excellent powerplay quarterback—but he can still contribute and log big minutes in almost every situation. A favorite of Babcock, he could sign a bonus-laden deal if teams aren’t willing to give him a second year.

F Tyler Ennis — Perhaps overlooked for the Maple Leafs this year because of their star-studded forward group, Ennis took a minimum salary contract in order to try and build his value back up and he did it wonderfully. Even fighting through an injury that limited him to 51 games, the undersized forward scored 12 goals from the fourth line and showed he can still play at the NHL level. A three-time 20-goal scorer, the 29-year old Ennis should secure another NHL deal to provide a little scoring depth at a relatively inexpensive price—but probably one the Maple Leafs can’t afford.

Projected Cap Space: The Maple Leafs currently sit a little more than $6.94MM under the cap ceiling according to CapFriendly, but can also put Horton’s $5.3MM deal on long-term injured reserve if necessary to give them some more flexibility. That number is only including the cap hits for 18 players however, meaning they actually have even less than that once they decide who will be making the roster.

Nicholas Baptiste is on the move again.  After being dealt to Nashville at the end of the preseason, TSN’s Darren Dreger reports (Twitter link) that he has once again been dealt, this time to Toronto.  The Predators’ announcement of the move indicates that the deal is for future considerations.  In a related move, the Toronto Marlies announced (via Twitter) that they have dealt ECHL winger Emerson Clark to Milwaukee (Nashville’s AHL affiliate) for future considerations.

The 23-year-old cleared waivers back in training camp and has spent the entire season at the AHL level following the move to the Predators.  In 50 games with Milwaukee, he has ten goals and ten assists.

Baptiste did spend nearly half of 2017-18 in the NHL with Buffalo where he played on their fourth line, collecting four goals and two assists in 33 games while averaging just shy of ten minutes a game.  That was enough to earn him a qualifying offer of just over $787K which he accepted back in mid-July.  However, given Toronto’s depth, it’s unlikely that he’ll return to the NHL this season.  Instead, he’ll serve as some extra insurance for the Marlies as they continue to battle for a playoff spot in the tight North Division.

With the new year ringing in and the 2019 Winter Classic between the Boston Bruins and the Chicago Blackhawks just minutes away, teams are continuing to shape up their rosters for the new year. Keep tabs on roster moves throughout the day as the NHL schedule begins to get really busy over the next week:

With injuries mounting, Sportsnet’s Elliotte Friedman reports the Nashville Predators claimed forward Phillip Di Giuseppe off of waivers from the Carolina Hurricanes and to make room for the young forward, the team placed center Kyle Turris on injured reserve once again with a lower-body injury, according to The Athletic’s Adam Vingan.

In Di Giuseppe, the Predators gets themselves a 25-year-old forward with 147 NHL games under his belt, but the winger hasn’t been able to lock down a full-time role in all the years he’s been with Carolina. He has one goal and four assists in 21 games this season with the Hurricanes. However, with the Hurricanes struggling themselves and Di Giuseppe being a healthy scratch for four straight games, Carolina opted to risk losing him by putting him on waivers. The team already lost Valentin Zykov on waivers to Edmonton (and then Vegas), so it’s another key loss for their minor league team.

Nashville has been plagued with injuries as the team is currently without forwards Filip Forsberg and Colton Sissons. Turris has also missed a game and was expected to be out Monday before the team returned him to IR and with Eeli Tolvanen playing at the World Junior Championships, the team opted to bring in Di Giuseppe to provide some added depth. The team also recalled Nicholas Baptiste to help fill in as well. There is no word whether Turris’ trip to injured reserve will be a long one. It’s very likely the Predators used Turris’ injury to open up a roster spot so they could take Di Giuseppe. Turris last played on Dec. 27, so assuming the trip to the IR is retroactive to that game, he won’t be eligible to return until their game on Friday at Detroit. He already spent almost three weeks on IR in late November and early December.

On the last day of 2018, 26 of the league’s 31 teams will be in action. The day starts with an epic matchup between the Nashville Predators and Washington Capitals, and ends with a pair of Western Conference battles that could have a big impact on the playoffs. While teams prepare for 2019, we’ll keep track of all the minor moves they make today.