The venture into North American hockey appears as if it will be short-lived for veteran Finnish forward Oula Palve. Palve initially signed a one-year deal with the Pittsburgh Penguins this summer, finally making the jump after a career year in the Liiga. However, he never made it to Pittsburgh, recording a paltry eight points through 37 games with AHL Wilkes-Barre/Scranton. The Penguins opted to move him to the Dallas Stars in January for defenseman John Nyberg, after which he recorded just five points through 23 games with AHL Texas. Palve’s time in the minors has indicated that it is unlikely he will make it to the NHL, so the speculation is now that he will return to Europe. Only this time, he is set to sign in the Swedish Hockey League, reports national news source Expressen Sport. Palve is expected to be a hot recruit for SHL teams, with Rogle and Farjestad expected to be the top suitors. At 28, Palve’s first season in North America is likely to be his last, especially if he signs a long-term deal in Sweden.

The Carolina Hurricanes announced that they have terminated the contract of defenseman Jakub Nakladal.  Nakladal cleared demotion waivers on Saturday and was assigned to Carolina’s AHL affiliate in Charlotte.  Cap Friendly notes via Twitter that Nakladal was quietly placed on unconditional waivers on Sunday and cleared earlier today. 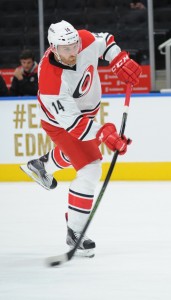 The 28 year old signed a one year, $600K deal with the Hurricanes back on October 9th after suiting up for the Czech Republic at the World Cup of Hockey.  He logged an average of 21:03 in ice time in those matchups while being held off the scoresheet.  However, he didn’t see much action with the Hurricanes as he got into just three games, collecting zero points and a -4 rating while averaging just 14:30 per game.

Nakladal’s only other NHL experience came last season with Calgary, where he played in 27 games. He picked up two goals and three assists in those contests, averaging 14:11 in ice time. He also spent time with Calgary’s AHL affiliate in Stockton, suiting up in 35 games while collecting 14 points (2-12-14).

While several teams had shown an interest in signing Nakladal to a two-way deal over the offseason, he held out for a one-way pact and stated that he would sign overseas unless he got one.  Although he got one from the Hurricanes, it would seem likely that he will cross the pond and sign elsewhere.  He has experience overseas in several different leagues, including the SM-liiga in Finland, the Czech Extraliga, and the KHL.

Winnipeg Jets defenseman Jacob Trouba made his presence felt in his first game of the season. It wasn’t on the scoresheet, however. Just ask Matt Duchene.

Trouba caught Duchene with a high hit to the head, causing the speedy Avalanche center to leave the game. Adrian Dater reported that the NHL’s concussion spotters may have pulled Duchene from the game. Avalanche coach Jared Bednar said post-game that he has no update on his star’s condition.

The two players have been linked before, with some speculation the Avalanche offered Duchene up in a trade for Trouba. With Trouba signing a two-year contract with the Jets before withdrawing his trade request and Duchene leading the Avalanche in scoring, it seems unlikely that anything will come to fruition soon.

First-year forward Shane Harper has been placed on waivers by the Florida Panthers tweets Bill Whitehead, who covers the team for the AP. The 27-year-old Harper made his NHL debut this season, seeing action in 14 games and recording three points for the Panthers.

Harper was signed by the Panthers in the summer of 2015 and spent the entire campaign with the AHL Portland Pirates. He scored 12 goals and 37 points in 59 games for the Panthers top minor league affiliate. It’s probable Harper will go unclaimed and be returned to the minors.

Elliotte Friedman adds that joining Harper on waivers this afternoon is defenseman Jakub Nakladal of the Carolina Hurricanes. Nakladal inked an unrestricted free agent deal last month with the Hurricanes and appeared in three contests for Carolina. Nakladal was held scoreless and finished with a -4 plus-minus rating while averaging 14:30 of ice time per game.

Given Nakladal remained unsigned until just days before Carolina’s 2016-17 season opener, it would seem likely he’ll clear waivers and be eligible to be sent to Charlotte of the AHL.

The Minnesota Wild have sent defenseman Mike Reilly to the AHL after just one game, allowing the 23-year old to play bigger minutes and be in the lineup every night. Reilly was a scratch against the Los Angeles Kings, and instead of watching from the press box he’ll go down and lead.

The Columbus Blue Jackets selected Reilly in the fourth round of the 2011 draft out of the BCHL and watched as he flourished in the NCAA, increasing his scoring totals in all three years at the University of Minnesota. They couldn’t sign him however, and he ended up getting a contract from the Wild in 2015. Last year for the Iowa Wild he put up 23 points in 45 games and earned himself an extended look in the NHL.

Though this is a setback in his career, it won’t be long until he’s back up with the NHL squad if his development continues as it has. His long wingspan and offensive pedigree will be excellent tools once he improves his work in his own end.

It’s been a good start to the season for rookies in the NHL. Auston Matthews scored a stunning four goals in his debut and Finnish top picks Patrik Laine and Jesse Puljujärvi also scored in their debuts. William Nylander had two assists.

However, two of the more impressive rookies to TSN’s Bob McKenzie are the Flyers’ Travis Konecny and Ivan Provorov. McKenzie appeared on TSN 1260 in Edmonton, saying it’s “ridiculous how good [Provorov] is” and saying Konecny was their “maybe their best player” in their first game.

Despite their early success, McKenzie didn’t see either of them being in the Calder Trophy conversation, because neither will post the offensive numbers. He also joked that “everybody knows they already awarded the Calder the other night after the first game. People didn’t see that presentation afterwards, but Auston Matthews was presented with it after the game.”

In other new from around the hockey world:

It’s officially the last week of the offseason with the first games of the new regular season slated for Wednesday. Obviously roster pare downs dominated the headlines this week but there were a few other transactions of note as well as a handful of injuries that might prompt teams to see what’s available on the open market. Without further ado, here is the roundup of this week’s top hockey stories.

After adding RW Martin Frk off of waivers earlier today, the Carolina Hurricanes continued to add to their roster, announcing the signing of UFA defenseman Jakub Nakladal to a one year, $600K contract.

Nakladal made his NHL debut last season with the Flames, playing in 27 games.  He picked up two goals and three assists in those contests, averaging 14:11 in ice time.  He also spent time with Calgary’s AHL affiliate in Stockton, suiting up in 35 games while collecting 14 points (2-12-14).

He recently suited up for the Czech Republic at the World Cup of Hockey, playing in all three of their games while being held off the scoresheet.  He logged an average of 21:03 in ice time in those matchups.

Calgary, among other teams had shown interest in Nakladal earlier in the offseason but on two-way deals.  However, the 28 year old had no desire to sign a two-way pact and intended to head back overseas if he couldn’t secure a one way deal.

With Carolina, it’s likely that Nakladal will battle with youngster Ryan Murphy for ice time on the third pairing.  As Murphy is expected to miss the first couple of weeks of the season, Nakladal should be able to get into the lineup pretty quickly with the hopes of making a good first impression.

Ducks center Rickard Rakell underwent surgery late last week to fix issues that arose from his appendectomy back in March, writes Eric Stephens of the Orange County Register.  The problem first presented itself following Sweden’s first World Cup of Hockey pre-tournament game and he was hospitalized shortly thereafter with his agent noting he was unable to eat at that time.

Rakell has been advised that he will have to rest up for a couple of weeks before he can resume training to get ready for the upcoming season.  On top of that, he still finds himself without a contract as one of 14 remaining restricted free agents.  At this point, a bridge deal is looking more and more likely.  Rakell had 20 goals and 23 assists in 72 games last season and is expected to be a top six forward when he is cleared to return to action and has a contract in hand.

More from the West: