The Winnipeg Jets announced that they have re-signed defenseman Jacob Trouba to a two-year deal worth an AAV of $3MM with the Winnipeg Jets. Sportsnet’s Elliotte Friedman was first with the report.  The contract will pay him a prorated $2.5MM this season and $3.5MM in 2017-18.  The restricted free agent had been holding out all season hoping for a trade to a different club where he could play a bigger role on his preferred right-side. 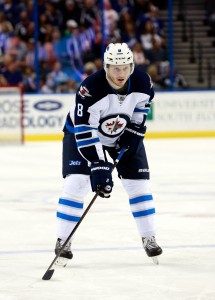 While this does not rule out a trade completely – as we saw with Kyle Turris just a few years ago – the Jets may have convinced Trouba that playing this year is more important than finding the perfect situation. The defenseman would have been ineligible to play had he not signed by December 1st.

The former first-round pick is considered a potential top-pairing defenseman able to play in all situations, and is currently blocked by both Dustin Byfuglien and Tyler Myers on the right-side. Believing he’s deserved of more minutes and a core role, many teams had inquired on him this summer and into the first part of the season.

Again, this doesn’t mean he won’t be dealt this season, in fact he may become even more desirable for teams who were worried about him demanding a long-term deal. Now with the cost certainty for the next two seasons, a club can fit him in under their payroll structure.  Teams like the Maple Leafs or Canucks now who have big contracts expiring over the next couple of seasons may find room and pick up the phone once again.

As Trouba likely realized, holding out is rarely helpful to a player’s case. While his hope was clear from the beginning, a strong front office can hold on and take any leverage you may have away from you. We saw it with Jonathan Drouin last season, who eventually made good with the club and has become a strong part, and the aforementioned Turris who was forced to sign a similar bridge deal before being dealt to the Ottawa Senators.

If Trouba can get back to playing, and prove that he’s the puck-moving shutdown defender that he’s looked like in the past, many teams around the league will be after him. At a $3MM hit this year and next, he’d be a welcome addition to almost any blueline.