Like always, we’ll keep track of all the training camp cuts right here. Keep checking back to see the updated list:

The 2018 portion of the season is underway, and with it teams can try to turn the page on whatever problems they faced last year. In places like Edmonton and Ottawa, perhaps the new year will bring success. As always, we’ll keep an eye on the minor transactions around the league and report them right here.

The waiver wire is very busy today as teams pare down their rosters. The season begins this week, and teams will try to sneak through some veterans and prospects to keep them in the organization. Here is the entire list of waivers for today:

Former top-prospect Steve Bernier has re-upped with the New York Islanders, signing a two-year two-way deal with the team. The financials have not been released yet, but it’s unlikely that the deal would be worth much more than the minimum of $650K at the NHL level. Bernier would have become an unrestricted free agent on July 1st. 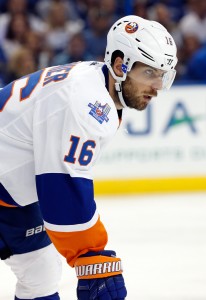 Bernier, now 32, scored 26 points in 33 games for the Bridgeport Sound Tigers of the AHL last season and ranked third on their team in goals despite playing less than half the year. The incredible talent that made him a 16th-overall pick in 2003 is still there, but at this point the chance of an NHL comeback is slim. Bernier once was one of the top prospects in all of hockey, and made an immediate impact with the San Jose Sharks in his rookie season after the team had traded up to get him at the draft. Scoring 27 points in 39 games for the Sharks, he was deemed the next star power forward but conditioning issues that had followed him since junior crept up again and he could never duplicate that 2005-06 run.

After 633 NHL games spread between the Sharks, Sabres, Canucks, Panthers, Devils and Islanders, the 6’3″ 220-lbs Bernier has collected just 230 points. He does though provide some depth for the Islanders should they get into injury trouble, but more likely will play out the year at the AHL level and try to help Bridgeport win a Calder Cup.

Although they cut him in training camp, the New York Islanders have brought back Steve Bernier; the team announced that they have inked him to a one year, two-way contract.  Financial terms of the deal were not disclosed.

Bernier played a sparing role with the Islanders last season, playing in just 24 games, notching a goal and five assists after making the team off a training camp tryout last year. He also suited up in six playoff contests, being held pointless. However, he’s only one year removed from a 16 goal, 32 point campaign with the Devils.  In the preseason, Bernier saw action in four games with the Islanders, picking up two assists while averaging 10:07 per game.

The 31 year old has bounced around in his career, spending time in six different organizations since being a first rounder of San Jose back in 2003. He has 633 NHL games under his belt, scoring 105 goals while adding 125 assists.

Last season, Bernier earned $750K on a one-way contract per Cap Friendly.  It’s likely that this new contract will carry a similar cap hit at the NHL level.

In the meantime, it appears that Bernier will be starting his season in the AHL.  Newsday’s Arthur Staple reports that the team has placed Bernier on waivers and will assign him to their affiliate in Bridgeport if he clears on Tuesday.

Bernier played a sparing role with the Islanders last season, playing in just 24 games, notching a goal and five assists after making the team off a PTO last year.  He also suited up in six playoff contests, being held off the scoresheet.  However, he’s only one year removed from a 16 goal, 32 point campaign with the Devils.

Bernier has bounced around in his career, spending time in six different organizations since being a first rounder of San Jose back in 2003.  He has 633 NHL games under his belt, scoring 105 goals while adding 125 assists.

If he were to crack the roster once again, it’s likely that he would reprise his role as an injury fill-in/depth forward.  He earned $750K last year with New York and would likely earn a similar amount if he can secure a contract.

Bernier isn’t the only veteran forward in camp looking for a spot as Stephen Gionta inked a PTO last month.  Coincidentally, the two were teammates in the past with New Jersey.

Many players have signed tryout deals as they look to earn an NHL roster spot.  Keep track of who has signed where with our Invite Tracker.

Free agent left winger Alex Tanguay isn’t quite ready to hang up the skates yet, writes Marc-Antoine Godin of La Presse (link is in French).  Tanguay’s agent, David Ettedgui, told Godin that there are two or three teams interested in his services but that he is looking for the right offer financially.  That would suggest that Tanguay is not likely interested in a PTO at this time.

The 36 year old split last season between the Avalanche and Coyotes, scoring eight goals while adding 27 assists in 70 games; his 35 points lead all remaining unrestricted free agents.  Tanguay accomplished that while battling through a lower body issue for most of the year, one that he is reportedly now recovered from.  We took a closer look at his situation back in July.

Tanguay, a Quebec native, reportedly expressed an interest in playing with his hometown Canadiens back in July.  He spent one year with the team back in 2008-09 before leaving to play in Tampa Bay the following summer.  However, at this time, Montreal is not among the teams that have shown an interest in signing him.

For his career, Tanguay has suited up in 1,088 NHL games with Colorado, Calgary, Montreal, Tampa Bay, and Arizona, recording 283 goals and 580 assists.  He currently ranks 14th in all-time points among active NHL players.

Godin also provided an update on UFA winger Steve Bernier.  His agent, Phillipe Lecavalier, reports that no fewer than seven teams have expressed an interest in him so far.  Bernier played a sparing role with the Islanders last season, playing in just 24 games, notching a goal and five assists.  He also suited up in six playoff contests, being held off the scoresheet.  However, he’s only one year removed from a 16 goal, 32 point campaign with the Devils.

The fact that there is no deal done at this time despite the fact that many teams expressing an interest suggests that no team has offered more than a PTO to the 31 year old at this point.  Bernier is no stranger to waiting to secure a tryout deal as that’s how he wound up with the Islanders last year, parlaying a September tryout into a one year contract.