While the Sabres listed Jimmy Vesey as out week-to-week due to an upper-body injury at the beginning of this week, Mike Harrington of The Buffalo News reports that the winger may wind up returning as soon as Saturday.  If that happens, he’ll wind up missing only three games due to the issue which was sustained last Thursday.  He wasn’t placed on IR so they won’t need to make a roster move when he’s ready to return.

One player that they will soon have to activate off IR though is defenseman Brandon Montour.  Harrington notes that the blueliner is likely to make his season debut on Friday against Washington although it’s unknown who he’ll line up with.  However, as Buffalo currently has an open spot under the 23-man limit, they won’t need to send anyone to the minors in order to bring Montour back onto the active roster.

Other injury news around the league:

Austin Watson will be sticking around with Nashville for a few more years.  In a rare mid-game announcement, the Predators announced that they’ve signed the winger to a three-year, $4.5MM contract extension.  PuckPedia reports (Twitter link) that the deal pays a straight $1.5MM each season with no signing bonuses or trade protection.  GM David Poile released the following statement regarding the deal:

Austin is the ultimate team player and we look forward to continuing to see him thrive and be an impactful member of our team.  The Predators organization continues to support Austin and his family and are pleased to take this next step forward with them. His hard work, coupled with a caring environment has him in a good place to be successful on and off the ice. Austin sticks up for his teammates and does whatever is necessary to help this team win hockey games. 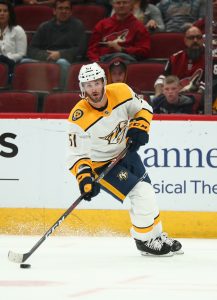 After being more of an energy player at the beginning of his career, Watson has started to show that he can be more of an offensive producer in recent years, posting a career high in goals (14) and points (19) in 2017-18 and points per game (0.43) last season.  He’s off to a bit of a quieter start this year with a goal and an assist in two games but his ice time has also dipped under the 13 minute per game mark.  Nonetheless, while he isn’t hitting the scoresheet too often yet, he does lead the team in hits and is among the league leaders in blocks per game by a forward.

Watson, a 2010 first-round pick (18th overall), has spent his entire career with the Nashville organization.  Over his NHL career which spans parts of six seasons, he has 31 goals and 34 assists in 206 games while chipping in with 536 hits.  $1.5MM is certainly a reasonable rate for a winger that’s capable of playing a regular role on the third line and represents a $400K raise on his current $1.1MM AAV.

Poile and the Predators still have a lot of work to do with their pending free agents, even after extending Roman Josi back on Tuesday.  Wingers Mikael Granlund and Craig Smith highlight a group of seven players that are slated to become unrestricted free agents in July.  With Watson’s deal, Nashville has nearly $70MM committed to 15 players for next season.

Presumably, this switch was made at least in part to try to find Domingue a new team.  After spending last season as the full-time backup in Tampa Bay where he got into 26 games, the Lightning opted to bring in Curtis McElhinney as the number two to starter Andrei Vasilevskiy.  During the summer, GM Julien BriseBois openly acknowledged that there were trade discussions involving the 27-year-old but evidently, nothing came to fruition.

As a result, Domingue now finds himself in an awkward situation.  The team signed Scott Wedgewood to be their number three goaltender in free agency and brought back Mike Condon as part of a salary dump move to clear out Ryan Callahan’s contract and brought in Spencer Martin to serve as Wedgewood’s backup.  Now, they’re carrying three goalies (Domingue, Wedgewood, and Condon) with AHL Syracuse while Martin has had to drop to the ECHL, a level he hadn’t been at since 2015-16 just to get some playing time.

Clearly, there’s a logjam for Domingue to contend with and it has limited his playing time as he has played in just four games with the Crunch this season.  Considering that he’s slated to be an unrestricted free agent this summer, finding an opportunity to play regularly (even if it isn’t necessarily at the NHL level to start with) would be ideal.  We’ll soon find out if this agent change helps that come to fruition.

Frank Seravalli of TSN has released his first Trade Bait board of the season, and at the top is Chris Kreider of the New York Rangers. Both Seravalli and Elliotte Friedman of Sportsnet have now suggested that Kreider could be a worthwhile option for the St. Louis Blues while they deal with the absence of Vladimir Tarasenko, though neither scribe does anything more than speculate on the situation.

More interesting perhaps is Travis Hamonic’s appearance relatively high on the board, after recent news came out that he would not negotiate an extension in-season with the Calgary Flames. Hamonic has all the makings of a top trade deadline acquisition—a 29-year old right-handed defenseman with an expiring contract that carries a reasonable $3.86MM cap hit—but he’s also still an important part of a Flames team that had big expectations this season. It’s still early, but as the calendar turns to November trade speculation is about to heat up.

The Winnipeg Jets are in the news again today, this time announcing that veteran forward Mark Letestu will not be playing hockey anytime soon. Head coach Paul Maurice explained to reporters including Mitchell Clinton that Letestu has been diagnosed with myocarditis, a virus that attacks the heart. Expected to make a full recovery, Letestu will be allowed only to do light activity for six months.

It’s a tough break for a player who was just trying to keep his NHL career in tact after playing almost all of 2018-19 in the minor leagues. Letestu signed a one-year, two-way contract with the Jets at the start of free agency and has suited up seven times for them this season.

Obviously everyone hopes that he can return, but a six-month layoff at this point in his career may spell the end of Letestu’s time in the NHL. The 34-year old is a great example of perseverance, working his way up from being an undrafted college free agent to a regular in the league. Over 567 regular season games he has scored 210 points, adding another 15 in his 36 postseason appearances.

For the Jets, this just takes another one of their depth pieces off the board for the rest of the season. While Letestu wasn’t expected to make a huge contribution, it still means his experience won’t be available for the team if they run into other injury concerns.

Despite being one of the better Winnipeg Jets’ defensemen at times this season, Ville Heinola is headed to the minor leagues. The organization made the move today, preserving for now the first year of Heinola’s entry-level contract. The 18-year old defenseman has played in eight NHL games to this point, but will see his contract slide if he does not suit up for more than nine this season.

Selected 20th overall in June’s draft, Heinola immediately impressed the Winnipeg staff with his calm, professional play at both ends of the rink. The teenager had played a full season in Finland’s top league, logging big minutes even at such a young age. He stepped into a similar situation with Winnipeg, averaging close to 20 minutes of ice time through his first six games.

Though those numbers dropped off as the Jets started to get healthier on the back end (to the point where he has even sat as a healthy scratch), his performance in a short NHL stint should have fans excited about what comes next. Heinola recorded five points and showed he could hang at the highest level, even if he does need a little more seasoning to become a legitimate top option. The fact that he was playing at all as an 18-year old was impressive enough.

This assignment to the Manitoba Moose however may not be for the whole season. GM Kevin Cheveldayoff didn’t rule out a return to Finland for Heinola, explaining that there are still several options at this point. Wherever he plays, the cool-headed defenseman is someone to keep an eye on throughout his development.

Edmonton Oilers general manager Ken Holland will travel to Helsinki, Finland for the Karjala Cup (an international tournament) this week according to Mark Spector of Sportsnet, to check in on restricted free agent Jesse Puljujarvi. The young forward is having a ton of success in his home country and away from the bright lights of the NHL, scoring 11 goals so far for Karpat in just 17 games.

As the calendar flips into November, the Oilers (or any acquiring team) now have just a month to get Puljujarvi under contract if they want him to play in the NHL this season. As an RFA, he has to be signed by December 1st in order to be eligible to play at all. As Spector writes however, leaving him in Finland all season may be the best option for the Oilers at this point.

Not only are the Chicago Blackhawks keeping young Kirby Dach in the NHL for the time being, but they’ve also made a move to promote another future cornerstone. Adam Boqvist is on his way to the Blackhawks after being recalled from the Rockford IceHogs after just six professional games.

Boqvist, the eighth overall pick in 2018, had been playing in the AHL even though he still had eligibility in the CHL. After tearing apart the OHL for the London Knights last season—Boqvist scored 20 goals and 60 points in just 54 games—the Blackhawks obviously felt he was ready for the professional jump. Now he’s taken an even bigger leap to the NHL after recording one goal with Rockford.

It’s hard to express just how dangerous Boqvist is with the puck, jumping into the rush or walking the line in the offensive zone. The question is whether he will be able to get the puck back from opposing NHL forwards enough, something that seemed unlikely even as recently as training camp.

Still, with such an incredible skill level it’s hard to bet against the 19-year old defenseman. If he stays for more than nine games in the NHL the first year of his entry-level contract will kick in, something that wouldn’t have happened if he spent the year in the minor leagues.

Happy Halloween hockey fans! There are just two games on the schedule tonight, but it’s hard to imagine a better venue for a dress-up night than in Vegas where the Golden Knights will welcome in the Montreal Canadiens. Last night saw some spooky finishes too, with Taylor Hall of the New Jersey Devils even saying that the team is “kind of battling their own fans” after being booed consistently as they fell to the Tampa Bay Lightning 7-6.

As always, here are the minor moves around the hockey world.