With a system full of top prospects, the Hurricanes got an impressive rookie season from Svechnikov, drafted with the second-overall pick in 2018, last season and now will have a top-six option for another two years at an entry-level cost. At 18 years old, he tallied 20 goals and 37 points and should be in line for more playing time and bigger numbers this season as a 19-year-old and could eventually become the franchise winger the team needs long-term. The Hurricanes also have high hopes for Necas to step in and take big role next season at the center position. The 2017 first-rounder had an impressive season for the Calder Cup Champion Charlotte Checkers of the AHL and could provide Carolina with some cheap talent.

Bean, the team’s first-rounder in 2016, has only made two appearances for Carolina, but could get a chance to take a much bigger role after a strong season with Charlotte, which saw his skills take that next step. The 23-year-old Foegele began to show off his offensive skill over the course of the season in Carolina. He scored 10 goals and 15 points during the regular season, but was even more impressive in the playoffs with five goals and nine points in just 15 games. If he can take his game up a notch, the Hurricanes could have an even more impressive offense next season.

There were rumors that suggested that talks between Carolina and Faulk were no where close on a potential extension and others that said negotiations were promising, however, Faulk could be a legitimate trade candidate if the team can’t eventually work out an extension. The 27-year-old Faulk had a solid season both defensively as he was finally in the positive on his plus/minus for the first time in his career, while also adding 11 goals and 35 points. However, with a number of young defensemen who are waiting for a chance to get an opportunity in Carolina, it wouldn’t be shocking to see Carolina unload him at the trade deadline.

Haula is an interesting acquisition. The 28-year-old was coming off a 29-goal season in Vegas’ inaugural season, but then suffered a gruesome knee injury and never returned. In the end, he played just 15 games, although he was close to returning late in the season with many believing that he would have been available had the Golden Knights had gotten deeper into the playoffs. If he can prove to be healthy, Haula might prove to be one of the best acquisitions of the year. Whether the Hurricanes will re-sign him will obviously depend on how he fares next season.

The team might be ready to move on from van Riemsdyk, who has served as a bottom pairing defenseman, but probably makes too much at $2.3MM to keep around long term, especially since Fleury hasn’t really had a true chance to prove himself and could be a better option at his price.

The team has a number of interesting contracts with two years left, including their entire goaltending situation. The team has Mrazek, who put together a stellar season after years of inconsistency, and new backup Reimer as the new tandem with their top prospect in Nedeljkovic close to ready to step into the lineup. All three will likely stay this season as Nedeljkovic is waiver exempt and likely will just stay in the AHL. However, if he can prove in training camp that he’s ready for the back-up role, few would be surprised if the team found a way to unload Reimer, who had a terrible season last year in Florida.

Despite hearing constant rumors that Carolina was shopping Hamilton around this offseason, it looks like the Hurricanes will have the veteran defenseman for another season. He put up solid numbers, scoring 18 goals an 39 points and is solid defensively, but he could eventually be a trade candidate, perhaps as early as the trade deadline if the team struggles and can’t reproduce the same success it had a season ago. The team also hopes that they can get Dzingel to provide the same type of offense he was producing in Ottawa, rather than his struggles in Columbus. However, he should provide solid value at his pricetag and fit in nicely as a middle-six option.

It might have been the trade of the year when the Hurricanes acquired Niederreiter from Minnesota for Victor Rask. While Rask struggled in Minnesota, Niederreiter’s season took off when he arrived, scoring 14 goals and 30 points in 36 games and he slotted in nicely on the first line. If he can produce anything close to that, the team has a steal of a deal for the next three years. If his production drops back to what it was in Minnesota earlier in the year (nine goals and 23 points in 46 games) then the team has a contract that could be a burden for some time. 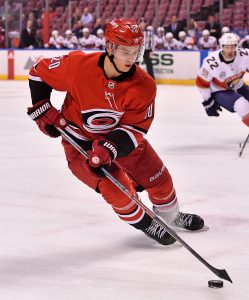 The Montreal Canadiens did Carolina a favor when they shocked the NHL by signing Aho to an offer sheet that didn’t look difficult to match. While five years likely isn’t ideal, the Hurricanes still now have their top franchise player signed until 2024 and can figure out its plans after that, but now are one of the few teams that have locked up their franchise restricted free agent already, with the rest still waiting to sign a contract. That should provide Aho, who had another breakout season with 30 goals and 83 points, with plenty of time to be ready for training camp and see if he can take his game to another level once again.

His linemate in Teravainen is another key piece of Carolina’s future who keeps producing better and better numbers. The 24-year-old produced 21 goals and a career-high 76 points and is locked up for another five years as well, giving Aho a solid winger to work with. The team, however, may not be as thrilled with the four years it still has in Staal, who produced one of his worst seasons although injuries did play apart. The 30-year-old still has four years at $6MM from a 10-year, $60MM deal he signed back in 2012. After posting just 11 goals and 28 points in 50 games, the team hopes he can bounce back.

One thing the Hurricanes did was locking up its young defenders. The team has seen Slavin develop into a top-line defenseman in the last year and to have him locked up at just $5.3MM for six more years will likely be one of the team’s biggest bargain for a long time. He has been averaging more than 22 minutes per game for three of his four seasons in the league. Pesce has also seen his game increase and is also a steal with the rising cost of young defensemen lately. Pesce saw his minutes break 20 minutes for a second straight season, while his offense increased by 10 points.

One question that is still up for grabs is whether Williams will return to the team. The 37-year-old winger has been told he can take as much time as he wants to determine whether he wants to return to hockey. He’s made it clear it’s either Carolina or retirement, but after putting up a solid campaign last year of 23 goals and 53 points, it’s hard to believe that the veteran leader is ready to hang it up if he still is capable of producing as a top-six forward. While he may eventually have to slide down to the third line, the veteran was critical to the team’s deep playoff run and Carolina hopes he will come back.

While McKeown might have a hard time finding playing time in Carolina’s stacked defense, the team will need to get Maenalanen signed at some point. The 6-foot-4 bottom-six winger stepped into the lineup late in the season and was a solid contributor, posting four goals and eight points in 34 games, while skating for just 9:26 of ATOI. He provided some physical play and if he can steal a spot on the fourth line, could be valuable.

The Carolina Hurricanes have done an impressive job of drafting well, developing their talent and adding veteran talent at reasonable prices. With most of their core already locked up long-term and plenty of talent still on entry-level contracts, the Hurricanes should be able to keep their team competitive for years and keep getting better as the team continues to develop.