They join defenseman Devon Toews on the list. He was added two days ago.

Due to salary cap restraints, the Avalanche will play a skater short tonight (11 forwards, 6 defensemen) against the Nashville Predators, who are dealing with a COVID outbreak of their own.

Both Burakovsky and Compher are giant parts of Colorado’s scoring depth this season. They’re both scoring at rates higher than 0.70 points per game, with Compher netting 11 points in 15 games and Burakovsy netting 21 in 25.

With Kurtis MacDermid moving up to play forward for tonight’s game, their defense will be stretched thin. Jordan Gross will be making his Avalanche debut, and young Justin Barron will play in just his second career NHL game.

The list of people in COVID protocol continues to grow as prior to their game against the Rangers tonight, the Kraken announced (Twitter link) that center Jared McCann and assistant coach Paul MacFarland have both entered the protocol.  McCann is off to a nice start to his season, leading Seattle in points with three goals and four assists through their first eight games while logging 16:24 per night, the highest ATOI of his career.  It’s the second time he has been in COVID protocol this season having been part of the group that was in there just before the regular season got underway.

The Colorado Avalanche are being hit with the injury bug early this season, as The Athletic’s Peter Baugh reports that forward Valeri Nichushkin is sidelined week-to-week with an upper-body injury.

With the team already missing Devon Toews and Pavel Francouz from their lineup prior to the season’s start, the team’s forward core has now lost three members in the past three days. Captain Gabriel Landeskog is suspended for the next two games, Nathan MacKinnon’s season debut is on hold as he remains on COVID protocol, and it’s now apparent the Avs have lost a third top-nine forward for the time being.

The 26-year-old Nichushkin has had somewhat of a career renaissance with Colorado after a rough start with the Dallas Stars, the team that drafted him 10th overall in 2013. He’s received Selke votes in back-to-back seasons, scoring 23 goals and 48 points in 120 games from 2019 to 2021 in an Avalanche uniform. Nichushkin had one assist in 15:03 of ice time on Wednesday against the Colorado Avalanche.

The team will now turn to Mikko Rantanen to carry the offensive load in the absence of MacKinnon and Landeskog. They’ll look towards forwards like Andre Burakovsky, Tyson Jost, and a pair or rookies in Alex Newhook and Sampo Ranta to increase production in depth roles to compensate for the loss of Nichushkin.

Not only have the Carolina Hurricanes had three forwards test positive for COVID-19 today, but Sara Civian of The Athletic also confirms that the reason Jordan Staal was placed on the COVID Protocol Related Absences list was because of a positive test result last week. Staal, who played the Red Wings the night before his positive result, has missed the last two games and is still in Detroit according to Civian. The three new players are likely to isolate in Nashville, while the rest of the team—those who have tested negative—fly back to Raleigh.

Though the Dallas Stars have still not begun their season thanks to an outbreak in training camp, this is the first incident of games being postponed day-of. It almost certainly won’t be the last.

Colorado has taken care of one of their restricted free agents as they announced that they’ve re-signed winger Andre Burakovsky to a two-year contract.  TSN’s Darren Dreger reports (Twitter link) that the deal pays $4.4MM in 2020-21 and $5.4MM in 2021-22 for a $4.9MM AAV.  GM Joe Sakic released the following statement:

Signing Andre was a priority for us this offseason. He has been a great addition to our team and was a big part of our success this season.  He’s a very skilled player who brings speed and scoring to our lineup, and we’re excited to have him under contract for two more years.

The Avalanche acquired him from Washington last offseason for second and third-round picks and the move turned out to be a great one for both sides.  The 25-year-old fit in quite well with his new team and put up career numbers despite the pandemic and multiple injuries, collecting 20 goals and 25 assists in 58 games while playing 15:12 per night, also a new personal best.

Burakovsky was even better in the playoffs, finishing fourth on the team in scoring with seven goals and ten assists in 15 games despite spending a lot of the postseason on the third line.  Quality secondary scoring from the bottom six can be hard to come by and they got it from him which resulted in a nice raise from the $3.25MM he made last season.

The deal buys out Burakovsky’s final year of RFA eligibility as well as one UFA-eligible year but still has him poised to hit the open market in the prime of his career as a 27-year-old in 2022.

The Colorado Avalanche will have their captain back in the lineup tonight for the first time since October. Gabriel Landeskog has been activated off injured reserve and will play tonight against the Montreal Canadiens. Andre Burakovsky will be across from him on the second line, while Nazem Kadri is out with a lower-body injury.

Even with Nathan MacKinnon trying to put the team on his back offensively, you could tell that the Avalanche missed Landeskog and Mikko Rantanen. The team has gone 9-7-1 in the captain’s absence, but is rolling again and healthy enough to take a shot at the top of the Central Division.

One of only three teams that has scored 100 goals this season already, the Avalanche reach new heights when Landeskog is healthy and contributing. Coming off a career-high 34 goals and 75 points last season, the 27-year old should give them a confidence boost as they play the second half of a back-to-back.

Happy Thanksgiving to all our American readers, who will have to go almost hockey-less today. With the NFL taking over the airwaves, just one NHL game is scheduled. That one takes place in Montreal, where the Canadiens will welcome back P.K. Subban as a New Jersey Devil. Still, teams are likely to make several moves today and we’ll keep track of all of them right here.

The Minnesota Wild announced earlier today they signed Jared Spurgeon to a seven-year, $53MM extension that will kick in during the 2020-21 season. The Athletic’s Michael Russo reports that Spurgeon’s deal has a no movement clause this year as well as the first four years of the first contract. After that, Spurgeon has a 10-team modified no-trade clause for the final three years, which will kick in during the 2024-25 season.

The St. Louis Blues expect to have almost everyone back in their lineup from last season with a few exceptions. However, what about the season after that? General manager Doug Armstrong will have to make some tough decisions with players like Alex Pietrangelo, Joel Edmundson and Brayden Schenn all hitting unrestricted free agency. While it’s likely that all three would like to return on long-term deals, that isn’t likely due to the team’s salary cap situation, growing list of developing prospects as well as the approaching expansion draft.

With that in mind, St. Louis Post-Dispatch’s Jeff Gordon writes that the team’s top priority will be to sign Pietrangelo and that could cause problems for the others, especially Schenn. After an impressive 2017-18 season, Schenn’s numbers dropped as going from 70 points to just 54 last season. However, if Schenn returns to his old numbers, which is very possible as the Blues struggled on the power play last year, he could easily price his way out of St. Louis.

On top of that, with the way players have been paid this offseason on the free-agent market, Schenn could easily command $7MM per year, he’d be an expensive player, especially with ever improving play of Robert Thomas and the Jordan Kyrou. With those two top talents, the Blues’ need for Schenn shouldn’t be as necessary for the 2020-21 season. The team might also not want to bring Schenn back because any deal would likely force them to add a no-movement clause, something the team might be reluctant to do with the expansion draft quickly approaching.

The Colorado Avalanche have inked one of their restricted free agents, signing Andre Burakovsky to a one-year contract. Burakovsky decided not to file for arbitration earlier this month after being issued a $3.25MM qualifying offer, for which the deadline to accept was today. The young forward will still be a restricted free agent at the end of the contract in 2020. 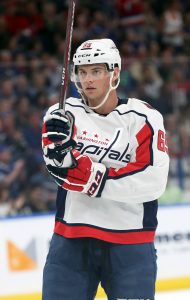 Burakovsky, 24, was acquired by the Avalanche earlier this offseason after playing the last five years with the Washington Capitals. The 23rd-overall pick from 2013 has already amassed 328 regular season games with the Capitals, recording 145 points. Those total include consecutive seasons of 25 points, a disappointing drop that made the talented Austrian available. The Capitals couldn’t afford to keep Burakovsky around for that $3.25MM price tag, but the Avalanche are happy to take a shot on a player that had previously looked like a top-six winger in the making.

It’s difficult to find players with Burakovsky’s skill and size combination, but unfortunately that mix still hasn’t been able to produce a huge offensive season to this point. With a career-high of 38 points now several years behind him, Burakovsky will have to find a different level of success in order to deserve this contract and avoid going non-qualified next summer. Even the Avalanche, who have plenty of cap space at the moment, won’t be able to pay $3.25MM for a 12-goal winger, the total he has reached in each of the past three seasons.

It certainly appears as though he’ll the the opportunity to show he is better than that. The Avalanche have been reliant on their top line for a huge amount of their offense the past few years, but worked hard this summer to expand their attack and bring in some more secondary scoring options. Burakovsky joins Nazem Kadri and Joonas Donskoi as potential options for the second line, though each of them will have to prove their worth in new surroundings.

At the very worst, Burakovsky is a lottery ticket that doesn’t pay out and only cost the Avalanche a pair of draft picks. At best, he finally breaks out and becomes the dominant offensive piece he was in junior. Not a bad gamble for a team looking to make a splash in the Western Conference playoffs this season.