Both the Pittsburgh Penguins and New York Rangers will be missing a top-four defenseman for tonight’s Game 2. Brian Dumoulin is out for the Penguins, while Ryan Lindgren is out for the Rangers.

Dumoulin nearly hit 50 shifts in Game 1’s triple-overtime win, logging 36:35 of ice time, two shots, one hit, and one blocked shot. Making a name for himself as the longtime defense partner to Kris Letang, it’s likely Mike Matheson will slot in Dumoulin’s place on the top pair. Both Mark Friedman and Nathan Beaulieu took warmups for the Penguins, and one of them is expected to draw into the lineup.

Lindgren was banged up in the last game and was called a game-time decision with a lower-body injury this morning. He serves a very similar role as Dumoulin does in Pittsburgh, serving as the more defensively-inclined partner to Adam Fox. He didn’t quite hit 30 minutes of ice time in Game 1, struggling with the injury during the game. Justin Braun is drawing into the lineup, but it’s unclear how the pairs will look.

The New York Rangers have made an interesting defensive addition, acquiring Justin Braun from the Philadelphia Flyers. The Flyers will receive a 2023 third-round pick in exchange for the defenseman. 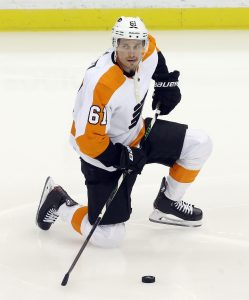 Braun, 35, is a pending unrestricted free agent like many of the other players moved today, but represents a nice fit for the Rangers who have decided to push at least a few chips to the middle during their surprising run in the Metropolitan Division. While the team is still on the way up, Igor Shesterkin and company have done enough in the first part of the season to deserve a bit of deadline help.

That help comes in the form of the 6’2″ Braun, who has a history of playing with more mobile, offensive partners. This year that’s been almost entirely with Ivan Provorov, who has also heard his name bandied about in trade rumors recently. Braun now goes to a team with several of those puck-movers, and could potentially help support a younger player like K’Andre Miller as the team takes the next step in their competitive window.

For the Flyers, selling Braun was almost a certainty after they decided to move out pending free agents. While a second-round pick surely was the target, they’ll have to settle for a third when it comes down to it. The fact that it’s in 2023 is interesting though as that draft has been targeted heavily in trade talks and the Flyers don’t seem committed to a true rebuild. They could potentially flip that pick at some point down the line for more immediate help.

The Rangers still have plenty of picks to deal from if they want to add more at the deadline, including two second-round picks this year. They also have plenty of cap space, meaning more moves could be coming in the next few hours.

Jeff Marek of Sportsnet was first to break the trade on Twitter.

One of the biggest names remaining on the trade-bait list is Seattle Kraken defenseman Mark Giordano. A pending UFA and still producing at a high level, many teams have been calling Seattle about the 38-year-old. Still, the price on Giordano remains high, rumored to be at least a first-round pick. Although this price may be reasonable for Giordano, many teams have balked at the it, some perhaps not necessarily viewing it as unfair, but not a prudent decision for their organization. One such organization is the Toronto Maple Leafs, who have made it known that they do not want to trade a first-round pick or a top prospect for a true rental player.

The Athletic’s Pierre LeBrun wondered if perhaps Seattle would be willing to take two second-round picks or a second-round pick and a prospect in lieu of a first-round pick (link). LeBrun speculates that if Seattle was willing to accept a package like this, then that may open the market up to Toronto and the St. Louis Blues, another organization who has made it known they do not want to trade a first-round pick. Another team that is in the mix for Giordano’s services is the New York Rangers, as Sportsnet’s Elliotte Friedman pointed out on Hockey Night in Canada yesterday evening. The Rangers, unlike Toronto or St. Louis, could be persuaded to trade a first-round pick, considering the young talent they have and the fact that they have not been without one in several years. While that does give the Rangers an advantage, Giordano, Seattle’s captain, has made it clear that if he is to be traded, he strongly prefers his hometown Toronto Maple Leafs.

An interesting story circulated today with a new team being added to the watch-list for goaltender Marc-Andre Fleury: the Minnesota Wild. Sportsnet’s Elliotte Friedman mentioned earlier that the Wild and the Chicago Blackhawks have had conversations about the veteran goaltender and that it was something to keep an eye on. Even if the two sides could agree on a deal, Fleury has a modified no-trade clause and the Blackhawks do not plan to trade him to a team without his approval, and thus, Fleury would have to want to be traded to the Wild.

Fleury has expressed his desire to try to help a team win a Stanley Cup, which the Wild appear poised to try to do. In last year’s Vezina Trophy winner, the Wild could find a pronounced upgrade over the struggling Cam Talbot. An All Star this season, Talbot has struggled greatly since his All Star appearance, posting an .886 save percentage over 10 games. Another factor in the Fleury talks worth considering is that Minnesota’s GM, Bill Guerin, won a Stanley Cup with Fleury and the Pittsburgh Penguins back in 2009, so there is an element of familiarity for Fleury in Minnesota.

The market for defensively sound depth defensemen is always a hot one, especially around the Trade Deadline as teams assess their deficiencies as they prepare for playoff runs. While Ben Chiarot discourse has been steamrolling its way through the public lately, he won’t be the only defensive specialist with playoff experience available at the Deadline. He’s not the biggest piece the Philadelphia Flyers may have for sale, but it looks like veteran defenseman Justin Braun could be a rental for a team looking to win this Spring.

On the latest edition of TSN’s Insider Trading, Pierre LeBrun suggests that multiple teams are interested in Braun’s services, but specifically lists the Toronto Maple Leafs as one of those teams.

Braun, now 35 years old, has exactly 100 games of playoff experience under his belt, 84 of which came with the San Jose Sharks. Since arriving in Philadelphia in 2019, even as his offense began to decline with age, he’s maintained his status as a stellar defensive specialist in a bottom-four role.

The price to acquire Braun shouldn’t be nearly as astronomical as the rumored first-round pick for Chiarot, as recency bias tends to reign supreme on Deadline day. It could be a very solid value acquisition for any team, though, as a mid-round pick spent on Braun seems like a much smarter move than a high-round pick or prospect spent on Chiarot.

Specifically for Toronto, Braun seems like an extremely logical replacement in the lineup for Justin Holl, who’s also a right-shot defenseman. Holl has struggled mightily this season, getting consistently outshined by Toronto’s young pair of D-men in Rasmus Sandin and Timothy Liljegren. Adding Braun to the mix would create incredible depth and injury insurance at defense for Toronto in the playoffs, as defensive depth issues caused by injury have exposed them in recent years.

While Philadelphia is happy to get three important players back into the lineup, it’s especially crucial for Thursday’s game. It’s the second night of a back-to-back series for the Bruins, but goalie Tuukka Rask is expected to make his season debut and take advantage of the home-ice momentum.

Provorov leads all Flyers in ice time per game (24:25) and leads Flyers defensemen in points (13), returning to stabilize a blue-line that’s suffered all season. Braun’s return also shouldn’t be overlooked – he’s likely the best defensive defenseman the Flyers have. He’ll likely return on a pairing with young Cam York.

Konecny is one of the forwards that the Flyers would like to see some more production out of. After being one of the team’s best point producers over the past few years, he has just five goals and 14 assists in 33 games. He’s hoping for a hot streak after his return.

The big news today is the addition of Hertl, after which the NHL immediately postponed tomorrow’s game between the Sharks and Golden Knights. Hopefully, the team can limit the spread or contact and get back to playing soon, but for now, their facilities have been shut down indefinitely.

Barabanov’s PCR test was inconclusive for the Maple Leafs, but then when retested came back negative. He was able to re-join the team at morning skate. Braun’s removal is another strong step in the right direction for the Flyers, who are getting closer to clearing their board.

Each day, the NHL will publicly release the list of players that are unavailable to their respective teams due to being in COVID-19 Protocol. Here are the rest of the results:

Maple Leafs head coach Sheldon Keefe explained to reporters including Chris Johnston of Sportsnet this morning that both Barabanov and Scott Sabourin had inconclusive results on a PCR test yesterday and were sent home as a result, though both samples came back negative upon retesting. It is unclear whether Barabanov’s appearance here is due to another test result.

As reported earlier, Blais’ appearance on the list this weekend was for a false positive and he will now be available to the Blues moving forward.

No new players on the list. With the list now at just 10 players, it’s the lowest number this season with the list being once in the 40s. Unfortunately, the Philadelphia Flyers still remain with six players sitting out.