Free agency is now a little less than a month away from opening up and there are quite a few prominent players set to hit the open market while many teams have key restricted free agents to re-sign.  Here is a breakdown of Colorado’s free agent situation.

Key Restricted Free Agents: F Matthew Nieto — The 25-year-old, who was picked up off of waivers from the San Jose Sharks has found a home in Colorado after the team rewarded him a year ago with a $1MM contract as a restricted free agent, posting a career high in goals with 15 and forcing his way to some second-line action. Primarily used as a fourth-line defensive option, Nieto has started to show his potential.

One key to Nieto’s success has been getting regular playing time. After playing in a career-low 59 games between two teams last year, he got into 74 games and averaged almost 15 minutes a game. Now with his game improving and the potential to earn a second or third-line role with the team next year, Nieto looks to get a raise from his deal a year ago.

D Patrik Nemeth — After years of not being able to find a full-time role with the Dallas Stars, Nemeth, like Nieto, seems to have found a home with the Avalanche. The 26-year-old blueliner was claimed off waivers at the beginning of the season and immediately made an impact on the Avalanche’s defense. Often teamed with Tyson Barrie on the first line, Nemeth has developed into a solid shutdown defender, although he doesn’t provide much offense (3 goals, 15 points in 68 games). After signing at $945K last season, Nemeth should get himself a significant raise as well.

Key Unrestricted Free Agents: G Jonathan Bernier — The Avalanche goaltending combination of Semyon Varlamov and Bernier was just OK, but the combination was good enough to vault the team to the playoff for the first time in years. Bernier, who finished the season with a 19-13-3 record with a 2.85 GAA and a .913 save percentage in 37 starts, had moments where he dazzled, including a stretch of nine consecutive wins between Dec. 31 and Jan. 22. Due to a Varlamov injury, Bernier was forced to start in all playoff games and struggled against a good Nashville team, allowing 14 goals in four games as well as being pulled once.

The team must decide whether Bernier is the answer to their goaltending problems as the team needs a backup who can fill in long-term for the injury-prone Varlamov. The team could opt to look at a Carter Hutton, but that might cost the team too much, while the team’s top goaltending prospects are still a year or two away, although the team could turn to streaky UFA Andrew Hammond, who performed well in the playoffs against Nashville in three appearances.

F Blake Comeau — The 32-year-old veteran continues to produce in a bottom-line role for the Avalanche and after another solid season which puts him at 13 goals and 34 points, Comeau is another key veteran who provides a young Colorado team with that leadership the team needs. He has had quite an effect on players like Nieto and J.T. Compher and after finishing up a three-year, $7.2MM deal at $2.4MM AAV, he may want a similar deal to finish out his career.

Projected Cap Space: With more than $22MM in cap space to work with, depending where the upper limit lands. That should give the team the possibility of going after a free agent or two, but with the team still developing its team through youth, Colorado hasn’t been a major talking point, yet anyway, for unrestricted free agents. However, the idea of the team going after James van Riemsdyk and placing him next to Nathan MacKinnon wouldn’t be a bad look either.

Regardless, the team also must use some of that cap space toward possible extension as the team may want to lock up promising star Mikko Rantanen as soon as possible, which he can do on July 1.

As front offices around the league call and text trying to find the right fit for their rosters, fans are waiting with bated breath wondering who could be pulling on their favorite sweater in the next few weeks. Will a superstar change hands and take over as the new face of a franchise? Will a veteran finally find his way to the Stanley Cup promised land? The deadline is now less than six weeks away.

We may not have to wait until the very end to answer these questions though, as January has been a busy month for trade action in the past. We’ve already had two moves this year, and several more could be finalized before the calendar turns over. For now, let’s take a look back at the last few years to see what kind of moves are made in the dawn of the new year.

Obviously 2017 wasn’t filled with the most blockbuster trades in the month of January, but several teams did add small pieces for potential playoff runs. Nesterov didn’t really work out in Montreal, and Wingels couldn’t find his scoring touch in Ottawa.

2016 was a much more active January, with big names like Lecavalier, Johansen and Jones all dealt. While the Nashville-Columbus trade might have had the biggest impact long-term, Pittsburgh’s acquisition of Hagelin was a big part of their Stanley Cup run, as he scored 27 points down the stretch and added another 16 in the playoffs.

There is certainly value to be had in January trades, and it’s clear that teams like Nashville and Anaheim aren’t scared of making an early move. While those two might not be the most watched teams on the trade market this year, don’t rule them out of making tweaks once again.

With training camp cuts coming fast and furious, many names were placed on waivers today as teams begin to try and slip players through to their minor league affiliates. Below is a complete list of players on waivers today, thanks to Renaud Lavoie of TVA Sports:

The Colorado Avalanche have signed Duncan Siemens, Felix Girard and Gabriel Bourque to one-year, two-way deals for the 2017-18 season. The team did not release any financial details on the contracts. All three players were restricted free agents this summer, and though Siemens and Bourque were both arbitration eligible neither filed.

Siemens is perhaps the most interesting and confounding player of the trio, an 11th-overall selection who has still yet to make an impact at the NHL level. His professional career to this point has been a huge disappointment, but a glimmer of hope yet remains. At the end of last season, Siemens played three games with the club and actually showed he may still have some potential as a Mark Borowiecki-type physical presence on the back end. Though the offensive upside he showed in junior has all but disappeared, the 10 hits he recorded in three games (including six in a single contest) gave fans some hope.

Girard and Bourque, both former Nashville Predators prospects came to the Avalanche in the past year to try and take the next step in their careers. Bourque signed with the team last summer on a professional tryout which earned him a contract, while Girard was the return for Cody McLeod in a mid-season trade. At very different points in their careers, Bourque is trying to hold onto the last strings of his NHL career while Girard is just trying to earn a promotion for the first time. Both will see substantial time in the AHL next season.

That leaves the Avalanche with three restricted free agents, in three very different circumstances. One, Matt Nieto filed for arbitration and will have a hearing on July 31st should the two sides not find a common ground. Two, Rocco Grimaldi is hoping for a deal to prove that his big time AHL scoring talent can translate to the NHL if given the chance, and three, Nikita Zadorov and a potential long-term deal to keep one of the Ryan O’Reilly trade pieces in Colorado as a young building block. That all comes under the shadow of the KHL for Zadorov though, as rumors have persisted that he has a deal in place with CSKA Moscow should he be unable to reach a contract with Colorado.

The Nashville Predators have added some grit up front, announcing the acquisition of winger Cody McLeod from Colorado in exchange for prospect center Felix Girard.

McLeod had seen his role with the Avalanche diminish considerably under new head coach Jared Bednar this season.  He has played in just 28 games this year, scoring once while adding 52 penalty minutes.  His average ice time had also been cut nearly in half from 2015-16, dropping to just 5:53 per game. 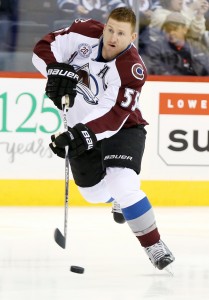 In his career, McLeod has played in 659 NHL games, all with Colorado after signing with the team as an undrafted free agent back in 2006.  He has 66 goals, 51 assists, and 1,359 penalty minutes in that span.  He has one season remaining after this one on his contract with a cap hit of $1.33MM.  The Avalanche will retain 40% of that, per ESPN’s Pierre LeBrun (Twitter link).

With the Preds, McLeod will likely contend for a spot on the fourth line.  With the team battling injuries up front, long-time AHL player Harry Zolnierczyk is currently in the lineup so McLeod should be able to step in and play right away.  As for the Avs, they had been carrying 14 forwards lately so it’s unlikely they’ll bring someone up from the AHL to take their place.  Instead, one of John Mitchell or Joe Colborne should get back into the lineup on a more regular basis.

As for Girard, he was Nashville’s fourth round pick (95th overall) back in 2013 and he has yet to play at the NHL level.  He has played in 35 games this season with AHL Milwaukee, scoring eight points (3-5-8).  The Avalanche have already assigned him to their minor league affiliate in San Antonio.  Girard is in the final year of his entry-level contract and carries an NHL cap hit of $631,667.

Interestingly enough, McLeod may not have to wait too long to face his former team as the Predators will be in Colorado tomorrow afternoon.