The expansion scenario for the Anaheim Ducks is one of the more fascinating stories of this off-season. Ever since the rules of the Expansion Draft were announced, fans have been wondering how the Ducks could traverse such a difficult process for teams with depth at all positions. That was even before Anaheim marched to a Pacific Division title and Western Conference championship appearance behind career-best seasons for Rickard Rakell, Jakob Silfverberg, Cam Fowler, and Josh Manson. Neither the 7-3 scheme nor the 8-skater scheme offer the Ducks enough protection to emerge June 21st unscathed and they have been desperately looking for trade help since they were eliminated from the postseason. Will they find it? Or will the best player on the division rival Vegas Golden Knights be a former Duck?

The first decision the Ducks really need to make is what scheme they want to use. Many at first thought that the Anaheim would have to use the 8-skater format to protect four defenseman: centerpieces Hampus Lindholm, Sami Vatanen, Cam Fowler, and Kevin Bieksa, who has a No-Movement clause. However, as the season went on, that decision became even more difficult. Bieksa fell out of favor under head coach Randy Carlyle and will almost surely waive his clause or, if he refuses, be bought out. Yet, young Josh Manson has developed into a shutdown defender like no other in Anaheim. While puck-movers like Lindholm, Vatanen, or Fowler could be replaced by up-and-coming prospects Shea Theodore, Brandon Montour, and Jacob Larsson or a healthy Simon Despres, the Ducks would be hard-pressed to replace the skill set of Manson.

So, the Ducks could go eight skaters and protect Lindholm, Vatanen, Fowler and Manson. The problem with that is then Anaheim would lose a young impact forward. Corey Perry, Ryan Getzlaf, and Ryan Kesler have No-Movement clauses, but would be locks to be protected regardless. That would leave just one slot left and two budding stars, Rickard Rakell and Jakob Silfverberg, in need of protection, not to mention iron man Andrew Cogliano. Vegas fans were salivating at the though of either Rakell or Silfverberg lining up on the Knight’s first line next year, but after the seasons they had, that seems next to impossible. The Ducks are in win-now mode and can ill-afford to lose one of their vital top-six forwards, especially in such a weak free agent market.

Instead, Anaheim will likely choose to go seven forwards and three defenseman as their protection scheme. Perry, Getzlaf, Kesler, Rakell, Silfverberg, and Cogliano will all be safe, as will three of the Ducks’ top four defenseman. Rather than lose the fourth for nothing, Anaheim has recently boosted its efforts to trade Vatanen. If they cannot, they will have to make a call between he and Manson, as Lindholm and Fowler have separated themselves from the pack as the team’s top two defenders.

The Ducks will also have to make a call about their seventh and final forward. Other noteworthy top-nine regulars like Nick Ritchie and Ondrej Kase are exempt from the draft, so the decision will probably come down to veteran Antoine Vermette or youngster Logan Shaw or Nicolas Kerdiles. Either way, Anaheim is in good shape with meeting the two-forward quota with the likes of Jared Boll and Chris Wagner both qualifying while not really in the conversation for protection. Vermette had a good first season in Anaheim, but he is 34 years old and has lost a step on his famous two-way game. The 25-year-old Shaw plays a physical game and contributed 10 points in 55 games in 2016-17, but was only given limited ice time and doesn’t have the ceiling of a player like Kerdiles. Yet, Kerdiles only played in one regular season game and four playoff games, notching just one assist. His AHL numbers suggest that he could do much more if given the chance though.

If the Ducks are unsuccessful in trading Sami Vatanen, Josh Manson could be the prize of the draft for the Golden Knights. The 25-year-old righty has the makings of top-pair defensive blue-liner who could anchor an entire defense. However, he just simply hasn’t reached that level yet, while Vatanen is an elite puck-mover.

If the Ducks do trade Vatanen, Manson is safe and Vegas won’t touch Kevin Bieksa, nor would would they likely take a chance on the injury-riddled Simon Despres. Minor league-caliber keeper Dustin Tokarski won’t generate any interest either. At this point, that decision on the final forward becomes key. Vegas will be on the lookout to get as much upside as possible in the Expansion Draft, and that is what Kerdiles provides. Anaheim can best protect their forward corps by retaining the young winger’s services. Vegas may have interest in Antoine Vermette as a veteran leader, but it’s doubtful. By default, Shaw could be the pick, but it wouldn’t be a major loss for the Ducks.

From potentially losing Jakob Silvferberg, Rickard Rakell, or Manson, if the Ducks can trade Vatanen and get Bieksa to waive his No-Movement clause, they could in fact leave Vegas with very little to choose from and could escape expansion with largely the same team that nearly made the Stanley Cup Final this season.

The free agent period is now less than one month away from opening up and there are several prominent players set to hit the open market while many teams have key restricted free agents to re-sign.  Here is a breakdown of Anaheim’s free agent situation.

Key Restricted Free Agent: F Nicolas Kerdiles – While most teams have several RFAs to re-sign, the Ducks are one of the exceptions.  Kerdiles was the lone pending RFA to see NHL action this season so he gets the spot by default.  The former second round pick (36th overall in 2012) made his NHL debut in the regular season, getting into a single game.  He made a strong impression though as they also used him in four postseason contests where he recorded his first career point.  Kerdiles is coming off his entry-level deal and is not arbitration eligible.  His cap hit in Anaheim this season was $925K on a two-way deal and it wouldn’t be surprising to see him take a lower NHL payday in exchange for a higher guarantee in the minors than the $70K he received. 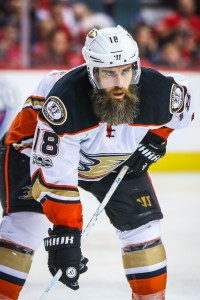 Key Unrestricted Free Agents: F Patrick Eaves – The Ducks wound up giving up a first round pick to Dallas to secure Eaves just before the trade deadline and he made quite a strong impression, scoring 11 goals in just 20 games.  He was off to a solid start to his postseason as well, tallying two goals and two assists in his first seven contests before suffering a high ankle sprain that kept him out for the rest of the playoffs.

Eaves is coming off a bargain contract worth just $1MM and will greatly surpass that in free agency.  Between Dallas and Anaheim, he scored 32 goals, only the second time that he had 15 or more in a single season.  That will likely prevent him from commanding top money as a 30 goal player often does but he has shown himself to be capable of playing a top six role and many teams around the league will have taken notice.

G Jonathan Bernier – Anaheim added Bernier from the Maple Leafs to replace Frederik Andersen (after nearly half his salary was paid by Toronto via a signing bonus) and he put up his best numbers since 2013-14.  His finish wasn’t as strong as he was pressed into action in the third round and took the loss in the final two games to Nashville.  He won’t be able to get the $4.15MM he earned on his last contract but Bernier projects to be one of the better backup goalies available on the open market.

Projected Cap Space: With 22 players already under contract, most of Anaheim’s payroll is already committed for next season to the tune of just shy of $70.7MM per CapFriendly.  As a result, they’ll be hard-pressed to keep Eaves in the fold unless they shed some salary either via trade or through the expansion draft.  It’s likely to be a fairly quiet offseason for the Ducks.