The Florida Panthers have re-signed one of their depth defenders, inking Kevin Connauton to a one-year, two-way contract. PuckPedia reports that the deal will carry an $825K cap hit in the NHL with a $300K AHL salary and a total guarantee of $350K.  Panthers GM Bill Zito released a short statement on the deal:

Kevin is a veteran defenseman who provided our club with invaluable stability and leadership both on and off the ice. We’re pleased to have him return to our defensive corps for the 2021-22 season.

Connauton, 31, was signed by the Panthers on the first day of this season, after spending last year almost entirely in the minor leagues. Though he played just four games during the regular season with the Colorado Avalanche in 2019-20, he ended up suiting up four times for them in the postseason. This year for Florida was much of the same, though he didn’t even get to play in the AHL, instead spending most of the year as a taxi squad extra. The veteran defender played just seven games, recording a single point.

Still, bringing back a defenseman that can do a little bit of everything and has over 300 games of NHL experience is never a bad thing, as long as the price is right. In Connauton’s case, the two-way deal certainly indicates a positive cost-value equation for the Panthers. Even if he doesn’t see much action in 2021-22, he’s a nice piece to have in case of injury.

Jan 14: All seven players have cleared waivers and can report to a taxi squad or the minor leagues.

Of course, several of these players did not have official contracts filed before today, meaning they now do.

Washington Capitals reporter Mike Vogel tweets that the team has signed Anderson to a one-year deal after bringing him into camp on a professional tryout. The deal will carry an average annual value of $700K. He will report to the team’s practice squad if he clears waivers. The Capitals have already announced that the team will go with Ilya Samsonov and Vitek Vanecek to start the season, but Anderson certainly provides a lot of experience at the position if anything goes sideways. The 39-year-old goaltender has 648 games played in his long career and carries a save percentage of .913.

Shore and Nieves are both brand new signings that their teams announced, both two-way contracts worth around $700K. Nieves’ deal was announced yesterday by the Tampa Bay Lightning, while the Edmonton Oilers announced Shore’s deal earlier this morning.

Timashov and Connauton were also both unsigned as of today, though it was clear that both had earned contracts already. The New York Islanders have been very coy with all of their training camp deals, while the Florida Panthers had kept Connauton with the group on a professional tryout. Their official contracts should be announced at some point today, given they are now on waivers.

The Florida Panthers have officially agreed to terms with Kevin Connauton, though it was clear a contract was coming when he was placed on waivers earlier today. The veteran defenseman has agreed to a one-year, two-way contract and will be assigned directly to the taxi squad should he clear waivers tomorrow. 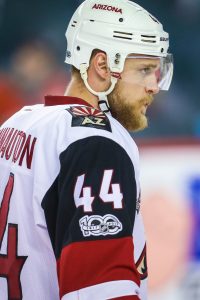 Connauton, 30, is what you might call a journeyman, suiting up for four different NHL teams before joining the Panthers on a professional tryout. Most recently it was with the Colorado Avalanche, where he ended up playing just four regular season games but entered their postseason lineup for a handful of games in the bubble as well.

While he likely shouldn’t be penciled into the lineup on a nightly basis, Connauton obviously did enough at training camp to prove he can still be a valuable depth piece. How the Florida defense shakes out is one of the most interesting things to watch in the early season, as Keith Yandle is currently on the outside looking in.

The release does not indicate how much Connauton will make this season, but it seems unlikely that the deal would carry an NHL salary much more than $700K. While he’s on the taxi squad, he’ll be earning the AHL amount of his two-way deal.

Training camp is just a few days away and things are heating up in the hockey world. With waivers open and rosters being announced, minor transactions will come fast and furious all across the league. We’ll keep track of them right here.

Don’t expect any impending unrestricted free agents out of Denver to re-sign prior to next Friday. The Athletic’s Ryan Clark reports that all of the Colorado Avalanche’s current UFA’s are expected to test the market. Not all of group have been ruled out from re-signing with the club, but they will all at least take the chance to talk to other teams.

Among the group still negotiating with the Avalanche are forwards Vladislav Namestnikov and Matt Nieto. Namestnikov is coming off of a strong season, especially considering he played for three different teams. It was with Colorado that he found the most per-game success, recording four goals and six points in nine regular season games and another four goals and five points in a dozen playoff games. It makes sense that the Avs would like to bring the talented two-way forward back, but Namestnikov could command a significant salary and is likely looking for some long-term security as well. With Colorado hoping to improve their roster from the one that fell short in the postseason, they will likely let Namestnikov discover his market value before deciding what the best use of their cap space is. Nieto is a different case. The experienced role player has been a solid contributor for the Avalanche for the past four seasons, but still has not established himself as a player worthy of a high-value contract. Colorado could re-sign the bottom-six forward without much of a hit to their salary cap status, but will likely weigh their roster space and needs versus the market value of extending Nieto.

Those who will not be returning to Denver next season? Clark states that forward Colin Wilson, defensemen Kevin Connauton and Mark Barberio, and goaltender Michael Hutchinson will not be re-signed by the Avalanche. Barberio has in fact already signed in Switzerland for next season. Wilson and Connauton are both veteran, experienced NHLers, but played very limited roles for Colorado this season, combining for just nine games played. The pair should be able to find new homes where the potential for NHL ice time is higher than it was with the Avs. Hutchinson is one of the best veteran No. 3 goalies in the NHL and played well for the Avs this year when pressed into action in the regular season and postseason. However, with the talk being that Colorado could look at bringing in a third goalie to challenge Philipp Grubauer and Pavel Francouz, combined with a couple of young pros in the system, Hutchinson appears to have lost his role. He will surely find work given the need for depth in net ahead of a condensed 2020-21 season.

With all of these players potentially moving out, the Avalanche have plenty of room to make some additions this off-season. While Clark warns that the team is keeping future extensions in mind when evaluating their salary cap flexibility, it still seems likely that Colorado could make a major splash or two this summer to improve a roster that is already very close to being a top Stanley Cup contender.

The Colorado Avalanche will be without both Philipp Grubauer and Erik Johnson for the next while, as head coach Jared Bednar told reporters including Elliotte Friedman of Sportsnet that the pair would be out “indefinitely.” Luckily they have Pavel Francouz to step into the net and takeover, as he did so many times this season. The 30-year old undrafted goaltender put up a .923 save percentage in 34 appearances for the Avalanche this season, his first full year in the NHL.

On defense, it will be Kevin Connauton inserted into Johnson’s spot. The veteran NHL defenseman has plenty of experience in the regular season, but hasn’t seen a playoff game since 2014. You can bet the Avalanche won’t be leaning as heavily on Connauton as they did on Johnson, who had been averaging over 19 minutes this postseason.

Ten more games are on the schedule for this evening, with another pair of prime Metropolitan match-ups. The Washington Capitals and Philadelphia Flyers are both in action again after their battle last night, against the New York Rangers and Carolina Hurricanes respectively. Carolina and New York are still within striking distance of a playoff spot, but will need to win games like these down the stretch. As the Metro and the rest of the league prepare, we’ll keep track of all the minor moves.

It’s a very busy Saturday in the NHL today as 30 of 31 teams are in action with Columbus being the lone squad with a night off following their overtime victory over St. Louis last night.  There is only one other time where that will happen this season and that’s on April 4th (where Columbus will once again be the only squad not playing).  There will likely be plenty of roster movement around the league as a result of the 15 games on the schedule and we’ll keep track of those here.

If you’re a hockey fan in Nova Scotia, tonight’s NHL action must feel like the Stanley Cup Final as provincial heroes and good friends Sidney Crosby and Nathan MacKinnon square off in Pittsburgh. The two superstar centers are off to great starts this season with the former taking the full weight of the Penguins on his back after Evgeni Malkin suffered an injury and the latter leading his Colorado Avalanche to a perfect 5-0 record so far. That’s one of six games on the schedule for this evening, and as teams prepare for action we’ll be right here to keep track of all the minor moves.

Even with the season starting tomorrow, teams still have some final cuts to make today. Rosters have to be cap compliant by the end of the day. though with so much talent on waivers there might still be some last-minute moves. We’ll keep track of those right here. Keep checking back throughout the day for updates.