Beginning this season, the full effect of the changes to the draft lottery rules announced last year are in place. Starting this year, teams can only move up a maximum of 10 spots if they’re selected, meaning teams originally set at picks 12, 13, 14, 15, and 16 cannot move up all the way to the first overall pick. A win for one of these teams in the first draft lottery secures the pick for the team that finished last.

The team with the best odds coming in will win the draft lottery for the second straight year, though. The Montreal Canadiens will pick first overall in their own building, the first time such an occurrence has happened since 1985 when the Toronto Maple Leafs drafted Wendel Clark at Maple Leaf Gardens. The New Jersey Devils moved up from fifth overall to second overall, bumping down the Arizona Coyotes, Seattle Kraken, and Philadelphia Flyers down one spot each.

While Shane Wright is still the consensus no. 1 overall selection across public draft boards (and NHL Central Scouting), there’s been recent noise about players like Juraj Slafkovsky and Logan Cooley potentially challenging him for first overall. That’s an upset unlikely to happen, though, as Wright had a terrific second half of the 2021-22 campaign, finishing with 32 goals, 62 assists, and 94 points in 63 games with the OHL’s Kingston Frontenacs. He also has 10 points in eight playoff games at the time of writing. While teams will draft him for his elite playmaking ability, he’s got an underrated shot when he chooses to use it as well. Standout Slovak defenseman Simon Nemec, Czech defenseman David Jiricek, Canadian forward Matthew Savoie, and Finnish forward Joakim Kemell are also names to watch for near the top of the draft board.

The final rankings are out from NHL Central Scouting, and even with his relatively unremarkable season, Shane Wright maintains his grip on the top spot. The Kingston Frontenacs captain leads all North American skaters and still figures to be the first-overall selection in 2022. Dan Marr, director of NHL Central Scouting, had this to say about the OHL forward:

Shane Wright is the complete package as an NHL prospect. He is a strong stride skater who possesses deceptive speed and quickness to beat defenders, evade checking or lead a rush. He has elite hockey sense with his vision, anticipation and composure to execute quickly on plays and has proven that he can carry the load and lead the way when it’s needed in game situations.

Just behind him is Logan Cooley, but after that, there is a bit of a surprise. Cutter Gauthier has climbed to the third spot on the North American chart ahead of players like Matthew Savoie and Conor Geekie, an impressive rise for the USNTDP product. Gauthier is committed to Boston College for next season and has continued to learn how to best utilize his 6’3″ frame to become one of the most dynamic forwards in the draft. 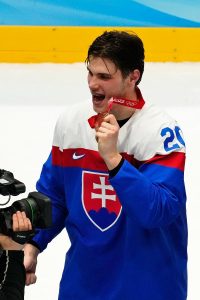 On the international side, Juraj Slafkovsky has climbed all the way to No. 1 after an incredible season that included winning MVP in the Olympics. The Slovakian forward also played well in Finland’s top league and should be selected in the first few picks of this summer’s draft. Marr had this to say about him:

Juraj Slafkovsky has that power winger element that NHL Clubs covet and his game has shown continual development this season while playing in the Pro Liiga in Finland and with the bronze medal-winning Team Slovakia at the Olympics. He is a smooth and agile skater for his size and has the strength, smarts and offensive tools to be productive. What has been most impressive is the ability he’s shown to learn and quickly adapt his play to get results at every level he’s competed this season.

Slafkovsky’s rise means Joakim Kemell dropped to second, despite recently playing extremely well at the U18 Worlds. He’s followed by other top talents including another Slovakian, Simon Nemec, in the third spot, who could easily be the first defenseman off the board this year.

The top ten international skaters are:

The full rankings, including the goaltending lists, can be found here.

When the NHL doesn’t participate in the Olympics, new stories can be written. One of this year’s best was Slovakia, which won its first Olympic hockey medal by defeating Sweden in the bronze medal game. A huge reason why the Slovaks won was young Juraj Slafkovsky, a draft-eligible forward that scored seven goals in seven matches. Slafkovsky was named tournament MVP by the IIHF.

In this tournament, most nations decided to take a more veteran group, but the 17-year-old Slafkovsky is the one who stood out the most. A brilliant mix of size and skill, the 6’4″ forward continues to climb up draft boards and make his case to be picked among the first few selections later this year. Amazingly, that seven-goal performance came after several other goalless appearances at the international level. In last year’s World Juniors, last year’s World Championship, last year’s Olympic qualifying, and this year’s shortened World Juniors–16 games in all–Slafkovsky had no goals and just a single assist.

If this is his coming-out party, it couldn’t have come at a better time. With limited action with TPS in Liiga this season, some teams may have not been extremely familiar with the young forward even if their European scouts were. They certainly will be now, only helping his stock rise as the year continues.

The rest of the tournament All-Star team has some familiar faces as well. It was as follows: