Just hours after being recalled under emergency conditions, 2022 sixth-overall pick David Jiricek finds himself back in the AHL. The Columbus Blue Jackets announced Friday afternoon that the team has recalled defenseman Jake Christiansen from the AHL’s Cleveland Monsters, re-assigning Jiricek there in his place.

Columbus does not play until tomorrow night against the New York Islanders, so there’s a chance this could be a paper transaction to get Jiricek into Cleveland’s game tonight against Rochester before returning to the Blue Jackets tomorrow.

It could also be a chance for Christiansen to get some NHL looks in 2022-23 after playing eight games last season, and recording his first NHL goal. He’s off to a bit of a tampered offensive start with the Monsters, recording four assists through 11 games, but he is coming off a 45-point campaign in the minors last year.

The Columbus Blue Jackets have updated the status of Zach Werenski and it isn’t good news. The star defenseman suffered a separated shoulder and torn labrum last season and is expected to miss the rest of the regular season. The team has also moved Nick Blankenburg, Sean Kuraly, and Jakub Voracek on injured reserve, while recalling Gavin Bayreuther, Marcus Bjork, and David Jiricek. 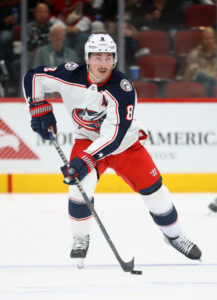 This is about the worst-case scenario for the Blue Jackets, who managed to win last night for just the fourth time this season. The team has already struggled to keep the puck out of their own net, allowing 57 goals through 13 games. By removing Werenski – and to a lesser extent Blankenburg – their defensive group now looks incredibly thin with basically no first-pairing talent. The 25-year-old also makes more than $9.5MM per season, a higher cap hit than anyone other than Johnny Gaudreau.

Without him, the team suddenly looks like a group that will be unable to turn around their tough start. The draft lottery in a year with several high-end prospects looks like a tempting reward for finishing near the bottom of the league.

The silver lining, perhaps, is that a young player like Jiricek could receive some interesting NHL opportunities. Werenski was the quarterback of the team’s top powerplay unit, a role that will now need to be filled by someone. During Jiricek’s short two-game taste earlier this year he did see a bit of time with the man advantage, though he wasn’t able to record a point.

While they won’t admit it, the Blue Jackets will likely have to transition this season into a development year and start looking toward the future. That will increase speculation about Gustav Nyquist, Vladislav Gavrikov, and Joonas Korpisalo, all scheduled to hit unrestricted free agency at the end of the year.

More roster moves coming out late this afternoon, the latest features the Columbus Blue Jackets, who announced they’ve assigned defenseman David Jiricek and goaltender Daniil Tarasov to the Cleveland Monsters of the AHL. The team has not announced any corresponding moves. Columbus was under the salary cap and with the maximum 23 players on their roster.

Sending the pair down when they didn’t technically need to might be confusing for some, however the move may have less to do with the Blue Jackets or individual player performance and more to do with development strategy. Jiricek, the sixth-overall selection in this year’s NHL Draft, played in just two games with Columbus, the last coming a week ago on October 30th. Similarly, Tarasov was the third goalie on the Blue Jackets roster behind Elvis Merzlikins and the recently-activated Joonas Korpisalo. At 23-years-old, after struggling in five games to start the season, and also not having played since last Sunday, sending Tarasov, as well as Jiricek, to the AHL where they can both play regularly, makes the most sense.

Tarasov has seen limited action since coming over to North American during the 2020-21 season, and based on that performance, still needs time to develop. In five games at the NHL level this season, Tarasov has a 3.57 goals-against average and .893 save-percentage. The goaltender played in just 15 games all of last season, four of which were with Columbus.

Jiricek, 18, came into this season with hopes of making the Blue Jackets roster, and though he has made his NHL debut, it is likely the organization would prefer to expose the young defenseman to a bigger role, which they cannot currently give him. Allowing Jiricek to play that role in the AHL and learn how to perform there may be more beneficial to his overall development than to play sparingly at the NHL level. Through five AHL games, Jiricek has four points, all assists.

Another top pick from the 2022 draft is about to get his chance at the NHL level. The Columbus Blue Jackets have recalled David Jiricek from the minor leagues, after Adam Boqvist was moved to injured reserve. Boqvist suffered a broken foot in last night’s game and will miss six weeks.

Jiricek, 18, was the sixth-overall pick this summer, and has quickly shown that he may be ready for a level higher than the AHL. In five games with the Cleveland Monsters, the 6’3″ defenseman has four assists and has registered 12 shots on goal. Known for his size, reach, and blistering slapshot, the Czech defender already does have plenty of experience at the professional level.

He made his debut in the Czech league in 2020 and played two full seasons for Plzen HC before being selected by the Blue Jackets. He also played for Czechia at the World Championship earlier this year, helping his country to a bronze medal in a tournament filled with NHL talent.

While that offensive production from the AHL may not immediately follow him to the Blue Jackets, Jiricek’s future is extremely bright. He is a natural defender who is rarely out of position, already has enough strength to play against opponents much older than him, and can show a mean streak that can be intimidating in front of his own net.

Quite different from the player who he is replacing, it’s not clear exactly what kind of role Jiricek will get in Columbus. Boqvist, 22, is known best for his ability to jump into the rush (or start it himself) and was quarterbacking the team’s second powerplay unit. His playing time at even strength had actually been the second-lowest among Columbus defenders this year, meaning there won’t be a ton of minutes to carve up, especially if the powerplay time goes to someone else.

Like other teenagers, it is also important to remember the entry-level contract rules for Jiricek. He will not burn the first year of his deal until he plays in his tenth game, meaning this could be a short-term tryout to see if he can hack it in the NHL. That said, if he shows he is ready, there will be some interesting decisions to be made when Boqvist is healthy again.

Hurricanes GM Don Waddell indicated to Chip Alexander of the Raleigh News & Observer that he expects to reach a settlement with defenseman Maxime Lajoie in advance of Tuesday’s arbitration hearing.  The 24-year-old spent most of the season in the minors so a new agreement shouldn’t be hard to come to.  What’s notable is that once that new deal is reached, Carolina will get their second buyout window soon after and Waddell didn’t rule out the possibility of using it but noted that they could make things work without going that route.  A player must make $4MM to be eligible to be bought out in this window and blueliner Jake Gardiner – who missed all of last season with back and hip issues – makes $4.05MM.  He has been cleared to return which does make him eligible to be bought out.  Once Lajoie’s deal is signed, the buyout window will open up three days later and lasts 48 hours.

The Columbus Blue Jackets have locked up two huge parts of their future, signing David Jiricek and Denton Mateychuk to three-year entry-level contracts. The young defensemen were picked sixth and 12th respectively in this month’s draft.

The earlier pick, Jiricek, is an extremely accomplished defenseman for his age, having played for Plzen of the Czech Extraliga for parts of the past three seasons. Jiricek had 11 points in 29 games and one point in Czechia’s one-game run during the short-lived 2022 IIHF World Junior Championships. Jiricek is known for his size, all-around game, and booming point shot. He’s coming off a major knee injury, but it’s not expected to have any long-term impact on his career. With this signing, the Blue Jackets have the option to bring Jiricek to training camp and see if the polished defenseman can make their team.

Mateychuk, on the other hand, may take a bit more time than Jiricek. The Canadian defenseman plays a dynamic game that’s a bit less pro-ready. Mateychuk had 64 points in 65 games for the WHL’s Moose Jaw Warriors and had 10 points in their 10-game playoff run. Mateychuk is a tad undersized, standing at five-foot-eleven, but even with that in mind, he plays the sort of game that is becoming increasingly valued in today’s NHL. He’ll likely return to Moose Jaw for another season before possibly contending for an NHL job in 2022-23 at the earliest.