The Minnesota Wild have sent Tyler Graovac back down the minors after playing the last three games with the club. After Jason Pominville was a healthy scratch last night against the Winnipeg Jets— a game which the Wild lost 5-4—he will likely figure back into the lineup tomorrow against the San Jose Sharks. Graovac has now played 52 games for the Wild this season, contributing nine points while skating just under ten minutes a game. The 23-year old will return to the Iowa Wild where he has ten points in twelve games, and wait for his next chance.

For Pominville, last night’s scratching was the first such occasion of his Minnesota career and came after being held scoreless in six of his last seven games. The winger had contracted the mumps disease last month and missed some time, and wasn’t very effective upon his return. In 67 games this season he does have 41 points, which is actually an improvement over his career-low (in a full season) of 36 last year. With a long playoff run upcoming, and two years left on his current contract, the Wild need the 34-year old to continue producing down the stretch.

Shane Doan will be on all the blooper reels for the next while. The Arizona Coyotes captain is fine after colliding hard with Jakob Chychrun in warm up last night, and missing most of the first period. According to Dave Vest of NHL.com, he team had checked him for a concussion, but ruled that he had just had the wind knocked out of him.

I didn’t know it was him that hit me. I was looking back at [Oliver Ekman-Larsson] and got hit. I had no idea who it was that hit me … I haven’t been hit that hard in a long, long time.

The Coyotes ended up winning a 1-0 game over the Colorado Avalanche in a battle between the worst teams in the NHL. It couldn’t have started in a way more fitting to what was to come, with the next wave of the Coyotes literally checking the old guard out of the way.

The Ottawa Senators have decided they no longer have a use for Phil Varone, after the news that Kyle Turris should return to the lineup. Monday afternoon they announced that Varone has been re-assigned to the AHL. The 26-year old Varone only received just five minutes of ice time in Saturday’s win over the Colorado Avalanche, and is more useful in the AHL where he currently leads the baby-Sens in points. With 42 points in 51, Varone has continued his minor-league dominance this season, part of a longer trend. In his six seasons of professional hockey, he has scored at least 35 points in each of them with a career high of 61 in 2013-14.

Obviously Varone isn’t in the Senators’ current NHL plans, but perhaps he’ll get a chance somewhere else next season. The former fifth-round pick is an unrestricted agent this summer, and will likely be looking for an opportunity at the highest level.

Ryan Carter’s comeback continues. After the report last week that Carter had begun practicing with the Minnesota Wild in an attempt to return to the NHL, he has taken another step toward that goal today by inking a professional tryout agreement with the Wild’s AHL affiliate in Iowa. The Iowa Wild announced the deal today, and Carter is expected to see his first ice time of the 2016-17 season in their next two games.

It’s been a long, strange road for Carter to get back to the NHL, and it’s not over yet. The Minnesota native played for the Wild for the past two years, recording 25 points in 113 games in a bottom-six role. However, when his contract expired at the end of last season and he hit free agency this summer, he made the executive decision that he would either sign with his hometown team or hang up his skates for good. The Wild were unable to commit to a contract for the 33-year-old, but didn’t want to rule out a return for the hard-working forward who grew up in White Bear Lake and played college hockey for Minnesota State – Mankato. They decided to invite Carter to camp this fall, giving him a chance to earn a contract instead. However, he was released not long after the action began due to issues with a lingering shoulder injury. Carter underwent a procedure on a torn labrum in his right shoulder four months ago, and many expected that to be the end of his career. Carter was not ready to call it quits just yet though, and rehabbed and work his way back into game shape, before going to the Wild brass with hopes of rejoining the team.

He’s well on his way, now. After more than a week of practicing with the NHL Wild, this PTO gives Carter the chance to finally see some game action with the AHL Wild. If the coaches and executives like what they see, expect Carter’s hard work to pay off in a contract by the end of the month. As long as he is signed by March 1st, the NHL Trade Deadline, Carter will be eligible to play in the postseason for the West-leading Wild. With Tyler Graovac recently clearing waivers and being demoted to the AHL and the utter lack of production from Kurtis Gabriel and Zack Mitchell, the need for another reliable player on Minnesota’s fourth line is more apparent now than ever. Carter gives them an option that costs nothing in trade capital, is familiar with the team, and can be counted on for hard work and dedicated play.

Despite having the most points in their conference, the Wild have decided to shake up their roster. The team has announced that they’ve recalled top prospect Alex Tuch and winger Zack Mitchell from the Iowa Wild of the AHL. To make room on the roster, the team has placed forward Tyler Graovac on waivers and placed defenseman Jonas Brodin on the injured reserve (retroactive to January 18th). 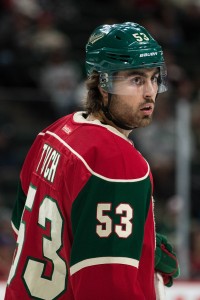 Tuch, who was selected 18th overall in the 2014 draft, will be receiving his second career cup of coffee. The 20-year-old appeared in three games for the Wild earlier this season, averaging a bit under 12 minutes per game. The talented offensive weapon failed to record a goal or assist during his brief cameo, but he has compiled 12 goals and 13 assists in 36 games for Iowa this season. Dane Mizutani of TwinCities.com notes that Tuch was practicing alongside first-liners Eric Staal and Nino Niederreiter during Monday’s practice.

Mitchell, 24, made his NHL debut earlier this season with the Wild, compiling zero points in 10 games. The former undrafted player has spent the past two-plus seasons with Iowa, and he’s compiled eight goals and six assists so far this season.

The team may have placed Graovac on waivers, but Mizutani notes that the squad is assuming that he’ll go unclaimed and ultimately land with Iowa. On the flip side, Jason Brough of Pro Hockey Talk writes that Graovac’s affordable contract (including a $625K cap hit for next season) could be enticing to some teams. The transaction is also an indication that the organization would like Charlie Coyle to get more reps at center.

The 23-year-old has spent much of the season on the Wild’s fourth-line, collecting three goals and one assist in only six games. Prior to this season, the 2011 draft pick has played in five games for the Wild between two seasons.

Brodin has missed the past 12 games as he’s recovered from a fractured finger. The former first-rounder was logging a career-low 19:47 minutes per game, but his offensive production was approaching career-highs. After having never finished with more than 19 points in his previous four seasons, Brodin had already scored three goals and provided 13 assists in 43 games this season.