The Vancouver Canucks have found some certainty during this difficult season. Today they announced that they’ve signed Ben Hutton to a two-year extension that will pay him $2.8MM annually. The deal will kick in at the start of the 2017-18 season. 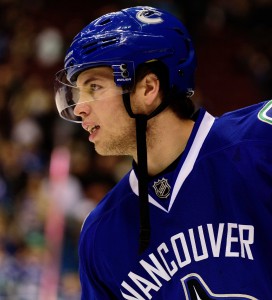 After selecting Hutton in the fifth-round of the 2012 draft (147th overall), the Canucks couldn’t have envisioned his quick rise to the NHL blueline. At just 22 last season, Hutton led all Vancouver defensemen in points with 25, in what would be an excellent rookie campaign. While he has only four points this season, he’s been relied upon even more, logging over 21 minutes a night.

With the Canucks floundering somewhere between contending and rebuilding, Hutton is a shining light for the future. The team will, however, be spending quite a bit of money on their defense next season as Erik Gudbranson and Nikita Tryamkin are up for new contracts and Alexander Edler, Chris Tanev and Luca Sbisa already cost $13MM combined.  It’ll be an interesting offseason for a team who put money up this summer to try and compete during the closing Sedin window, but have gotten off to a tough 8-10-2 start.

With Hutton signed, GM Jim Benning says next on the list is former first-round pick Bo Horvat, a player he’d like to sign long-term if possible. The Canucks have roughly $55MM committed to just 15 players for next season, meaning that they’ll have somewhere around $18-20MM (depending on where the cap lands) to fill out their roster. Horvat, Gudbranson, and Tryamkin join many other including Brendan Gaunce and Michael Chaput on the team’s long list of RFAs this summer. If Horvat does indeed get a long-term deal, he’ll substantially eat into that cap space.

The week of major injuries continues.

After scoring the first goal of the game in the second period against the team he played two seasons for, Richardson took a hit from Nikita Tryamkin along the sidewall. His right leg buckled under him as the 6’7, 265 lbs Tryamkin fell on top of him. The medical staffs from both teams assisted Richardson as he was strapped into a stretcher.

The 31-year-old Richardson has a broken tibia and fibula, according to TSN’s Bob McKenzie. He’ll have surgery on his right leg on Friday morning. Coyotes GM John Chayka confirmed McKenzie’s report to Arizona Sports’ Craig Morgan. Sarah McLellan of the Arizona Republic reports that Richardson is currently stabilized at a Vancouver hospital. There is no timeline for Richardson’s recovery, according to Chayka.

The Coyotes had a 2-0 lead at that point, but the Canucks scored twice in the next six minutes to tie the game before winning it in overtime.

Richardson has been off to a good start this season, with nine points in 16 games so far this season. He’s coming off a career-high 31 points in 2015-16, his first season with the Coyotes. While there’s no timeline for Richardson’s return, it will clearly be a long-term injury. With Coyotes center and pending-UFA Martin Hanzal already on the trading block, Chayka will likely look to add some depth down the middle. Perhaps rookie Dylan Strome will get a bigger role after playing just seven games out of 16 and averaging only 13:41 per game.

Vancouver Canucks defenseman Nikita Tryamkin is exercising a clause in his contract to deny Vancouver’s request to send him to the AHL, reports Iain MacIntyre of the Vancouver Sun.  GM Jim Benning commented on the decision:

“We’ve explored that. We’ve talked to him and his agent and he has said no. In a perfect world, we’d like him to get some games (in the minors). But it is what it is. He is working hard in practice and doing extra work.”

Tryamkin was drafted in the third round (66th overall) by the Canucks in 2014 in his third year of eligibility.  He spent parts of the last four years in the KHL before signing a two year, entry-level contract worth $925K per season late last year.  The deal contains a European Assignment Clause which means he can veto any attempts to send him to the AHL.  Benning noted that the clause was a requirement in order for Tryamkin to sign.

After signing last year, the Canucks put the 6’7 blueliner into the lineup right away, playing in 13 games to finish the season.  He had a goal and an assist in those games along with 31 hits and 23 blocked shots while averaging 17:31 per game.  However, he has not yet played this season as he sits eighth on the depth chart on Vancouver’s back end.

The team has expressed concern with Tryamkin’s fitness level, something that isn’t going to improve without getting into some game action; there’s only so much work that can be done off the ice.  They were hopeful that the 22 year old would be open to a temporary conditioning stint in Utica but it would appear that he’ll remain in the press box in Vancouver until injuries arise, hardly an ideal situation for the Canucks or for Tryamkin.