To call this past week a busy one would be a significant understatement.  On top of a frantic first day of free agency (the full recap of which is here while some moves will also be covered below), there were plenty of significant signings and trades.  The biggest ones are recapped here in the key stories of the week.

Avoiding The Market: While it may have taken a little longer than anyone really expected, two captains managed to avoid making it to free agency.  First, Alex Ovechkin re-signed with Washington, inking a five-year, $47.5MM contract, ensuring he remains with the team that he has spent the past 16 years with.  He’ll now take aim at Wayne Gretzky’s all-time goal record as he sits 165 away from setting the new standard.  Meanwhile, Gabriel Landeskog had to wait until mere minutes before the deadline for eight-year deals but in the end, he was able to secure a max-term eight-year, $56MM deal to stick around in Colorado.  He has been with the Avs for the past 10 years and while he won’t be able to set the franchise record for games played (Joe Sakic holds that title), Landeskog should have second place comfortably locked down by the time this deal ends.

Fleury To Chicago: The Marc-Andre Fleury era in Vegas came to a rather abrupt end as he was traded to Chicago in a cap dumping move with only minor leaguer Mikael Hakkarainen coming back in return.  Fleury was the first face of the franchise for the Golden Knights and he saved his best performance for last, posting a 1.98 GAA with a .928 SV% on his way to winning the Vezina Trophy for Goalie of the Year.  However, his $7MM cap hit was deemed too expensive for them to carry.  Fleury took some time to ponder his future but ultimately will report while Vegas GM Kelly McCrimmon didn’t waste much time spending the freed-up cap space.  First, he added winger Evgenii Dadonov from Ottawa for defenseman Nick Holden and a third-round pick to try to bolster their attack and then brought in goaltender Laurent Brossoit on a two-year, $4.65MM deal to serve as Robin Lehner’s new backup. 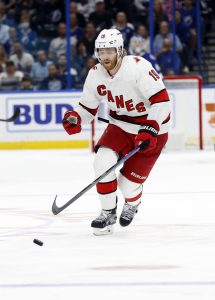 Hamilton Gets Paid: When Carolina gave Dougie Hamilton permission to speak with other teams and basically test the market early, they were hoping that Hamilton wouldn’t be able to command the money he was hoping to get which could have paved the way towards him re-signing.  That didn’t happen.  Instead, the top player to hit the open market was able to land a bigger contract than some expected, inking a seven-year, $63MM contract with New Jersey.  The 28-year-old is now tied with Cale Makar and teammate P.K. Subban for the fourth-highest cap hit among all NHL defensemen and gives the Devils the top-pairing defender they’ve been trying to acquire for several years.  New Jersey has had cap room to spend in the past but hadn’t been able to land a big fish on the open market.  They have now.

Seattle Splashes: Considering that the Kraken spent closer to the minimum amount than the cap ceiling in expansion, they had plenty of money at their disposal heading into free agency and opted to use a big chunk of it on a trio of players.  They added the top goalie on the market in Philipp Grubauer on a six-year, $35.4MM contract (that was originally rejected) plus one of the top wingers in Jaden Schwartz on a five-year, $27.5MM pact.  They also brought in center Alexander Wennberg on a three-year, $13.5MM contract, a nice reward for a strong season in Florida after being bought out by Columbus last fall.  Going back to Grubauer, his surprise signing sparked a pair of goalie trades.  Seattle flipped Vitek Vanecek back to Washington for a 2023 second-round pick while Colorado paid a steep price to acquire Darcy Kuemper (with $1MM of his $4.5MM price tag retained), sending defenseman Conor Timmins, a 2022 first-round pick, and a 2024 conditional third-rounder to the Coyotes to bring in the 31-year-old who is in the final year of his contract.

Jets Add Defensemen: The back end was a big issue for Winnipeg over the past two seasons and GM Kevin Cheveldayoff knew that needed to be addressed.  He didn’t wait for what wound up being a fairly light free agent market in terms of impact blueliners so he turned to the trade market instead.  First, he sent second-round picks in 2022 and 2023 to Washington for defenseman Brenden Dillon, then added Nate Schmidt from Vancouver for a third-round selection after Schmidt eventually agreed to waive his trade protection to facilitate the move.  With the moves, Winnipeg has added nearly $10MM to the cost of their back end but the two veterans are significant additions to a blueline core that also consists of Josh Morrissey and Neal Pionk.

Big Extension For Point: With too many things to cover in just five stories, we’ll add an extra one.  Tampa Bay was relatively quiet in terms of impact free agent signings due to salary cap reasons but they still had the biggest contract on the first day of free agency.  That went to Brayden Point who was eligible to sign as soon as the calendar flipped to the new league year and he did just that, inking an eight-year, $76MM extension that matches the recent ones handed out to Nikita Kucherov and Andrei Vasilevskiy when they were eligible to sign them.  More cap challenges lie ahead for Tampa Bay following this deal – they have over $80MM in commitments for 2022-23 already per CapFriendly – but their star center will now be in the fold for the long haul.