While it was believed that Nate Schmidt wasn’t keen on being traded to the Jets, he had a change of heart as on Tuesday, he waived his no-trade clause to be traded to Winnipeg with the Canucks receiving the Jets’ third-round pick in 2022 in return.  Both teams have announced the trade.

Schmidt was acquired from Vegas last fall early in free agency with the Golden Knights needing to free up cap space to facilitate the signing of Alex Pietrangelo.  The return in that deal was a 2022 third-round selection which means Vancouver was basically able to get a free year out of Schmidt when the two moves are combined. 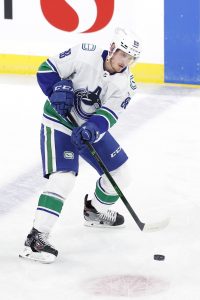 Unfortunately, that free season wasn’t a great one for the 30-year-old.  While he fit in quite well in Vegas, that wasn’t the case in Vancouver as Schmidt struggled for most of the year.  His offensive production was cut in half from the previous year from 31 to 15 points despite playing in nearly the same number of games and that was hardly the return they were expecting from someone that carries a $5.95MM cap hit.  Those struggles likely played a role in Vancouver swinging a deal for Oliver Ekman-Larsson over the weekend, a move that sealed Schmidt’s fate as being someone that was about to be on the move again.

Meanwhile, Winnipeg makes their second notable defensive addition in as many days after acquiring Brenden Dillon from Washington on Monday.  The Jets were hit hard two years ago with several blueliners leaving for no return in Ben Chiarot and Tyler Myers (free agency), the injury and subsequent retirement of Dustin Byfuglien, while Jacob Trouba was traded to the Rangers in a deal that netted Neal Pionk, a move that has worked out well for them thus far.  Even so, the only defensive addition of note prior to these two moves was Dylan DeMelo so there was work that needed to be done.

This addition, coupled with Dillon’s pickup, gives Winnipeg much more depth on the back end as the two could possibly form their second pairing behind Pionk and Josh Morrissey for next season while pushing DeMelo down to the third pairing.  All of a sudden, a position that was their biggest weakness looks a lot stronger.

With these moves – Winnipeg is picking up the full contract for Schmidt per Pierre LeBrun of TSN and The Athletic (Twitter link) – that should be it for additions on their back end.  GM Kevin Cheveldayoff will have a little over $7MM in cap room remaining (excluding Bryan Little’s LTIR-bound contract which carries a $5.291MM AAV) with Pionk, Logan Stanley, and Andrew Copp needing new contracts.  They’ll need to dip into that LTIR pool to get those deals done.

Meanwhile, Vancouver has freed up $9.75MM in cap room today with this swap and the Braden Holtby buyout.  The Canucks still have Elias Pettersson and Quinn Hughes among those in need of new contracts but they’ll have roughly $25MM in cap room, giving them enough flexibility to try to make another big splash over the coming days.