Just before the deadline for eight-year contracts, the Colorado Avalanche and Gabriel Landeskog have reached a deal for the max term. The captain will be staying with the only organization he’s ever known. The two sides have agreed to an eight-year contract worth a total of $56MM. Bob McKenzie of TSN tweets that the first four years come with a full no-movement clause, while the final four will be a modified no-trade clause. 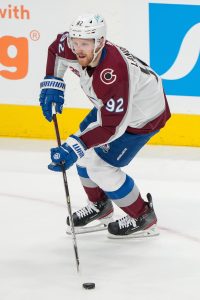 At times over the past few weeks, it seemed like Landeskog might actually reach the free agent market. The Avalanche were in a tight salary cap situation with a superstar defenseman to sign and a Vezina finalist on an expiring deal. Once the team worked out a massive RFA contract with Cale Makar though, things could progress with their captain.

In the end, it will be less than a $1.5MM per year raise for the 28-year old forward. Landeskog was coming off a seven-year, $39MM deal signed in 2013, which carried a $5.57MM cap hit. On this new deal, he eclipses Nathan MacKinnon’s $6.3MM cap hit but still comes far short of Mikko Rantanen’s $9.25MM as the team’s highest-paid forward. It’s much less than he likely could have received on the open market on a per-year basis, but the eighth season was something that only Colorado could offer. Landeskog now has contract security through his age-36 season and could very well play his entire career for the Avalanche.

On September 4, 2012, nearly a decade ago, Landeskog was named captain of the Avalanche. At the time, he was the youngest player ever to be given that honor in the NHL. He had just finished a Calder Trophy-winning rookie campaign, which included 22 goals and 52 points, and was given the “C” by veteran Milan Hejduk. Years later, Landeskog has been one of the most consistent players in team history and sits eighth all-time in points–including the days when the franchise was in Quebec. With this new deal, he’ll surely pass another few names on that list.

Landeskog is now tied for the 57th highest cap hit in the NHL, alongside young stars and veterans alike. The reasonable $7MM cap hit—especially when combined with the money that Makar left on the table—leaves room for the Avalanche to potentially bring back starting goaltender Philipp Grubauer in free agency as well. Colorado now sits with just over $12.3MM in cap space, though that includes a roster of just 16 players.

With less than 24 hours before free agency begins, any teams preparing an offer for Landeskog will have to turn their attention elsewhere. He ranked first on our Top 50 UFA list, but we predicted he would return to the Colorado Avalanche even if a deal wasn’t done before tonight’s eight-year threshold. Dougie Hamilton now assumes that top spot, while other forwards could draw a little more interest from teams looking to make a splash.