Free agency is now just under a month away and many teams are already looking ahead to when it opens up.  There will be several prominent players set to hit the open market in late July while many teams have key restricted free agents to re-sign as well. The Islanders, similar to last season, face an extenuating salary cap crunch that could force some moves. 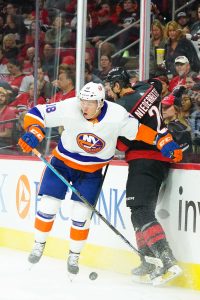 F Anthony Beauvillier – It was a solid season for the 24-year-0ld winger, who’s continuing to progress into a legitimate depth option moving forward. Even with this year’s shortened season, Beauvillier’s now scored at least 15 goals for four straight years, including one of his most complete two-way years in 2020-21. Mostly relied upon for his scoring ability, he’s a good young piece for a team that struggles to have consistent offensive success. While the Islanders would love to commit long-term to Beauvillier, keeping costs down this offseason is paramount. Expect a bridge deal, likely no more than three seasons long, in the $3MM range. It allows Beauvillier to cash in at the end of the deal, and it gives the Isles some necessary breathing room.

D Adam Pelech – Underrated no more is Pelech, who even received a handful of Norris Trophy votes this season. Playing over 21 minutes a night for the second straight year, the low-event, shot-suppressing defenseman forms one of the formidable pairings in the league with Ryan Pulock. New York’s second-best defender, Pelech will need a sharp raise this offseason. Yet again, though, the salary cap will limit how long the Islanders can make an investment. Older than Beauvillier, any deal will carry Pelech into unrestricted free agency. The Isles will sign him to as much term as they can while keeping the cost as low as possible.

F Kyle Palmieri – Despite probably the worst regular season of Palmieri’s career, he likely boosted his stock this offseason considerably with his playoff performance. He had nine points in 19 games with many coming at important moments. While there’s always the possibility of Palmieri taking a short-term deal on the cheap to try and win with the Islanders, it’s likely that he’ll receive enough more compensatory offers on the open market that he’ll be playing elsewhere next season. The Isles have younger, cheaper in-house options to replace his offense, including Oliver Wahlstrom and Kieffer Bellows.

F Casey Cizikas – The Isles’ longtime fourth-line center, this offseason could be one where Cizikas and New York part ways. Now 30 years old, Cizikas has played almost 600 NHL games and is an invaluable leader for the Isles. Yet the former 20-goal scorer remains stuck on the depth chart behind Jean-Gabriel Pageau. If Cizikas wants the opportunity to move elsewhere and play increased minutes, this may be his only shot. It’s also perfectly realistic to expect that Cizikas could take an extremely friendly deal to remain with the team. There’s always been an aspect of loyalty there, and that could come into play here.

The Islanders are in tough this offseason with just $5.8MM to work with and important pieces to re-sign. While that number will surely increase once defenseman Johnny Boychuk’s contract is moved to LTIR, the Islanders still likely won’t have that much room to maneuver with. It’s entirely possible that we see general manager Lou Lamoriello make some unexpected trades in order to boost the team’s talent level without much added cap expense, but only time will tell.