Center Kevin Hayes didn’t take warmups and isn’t playing for the Philadelphia Flyers on Thursday night against the Tampa Bay Lightning, as originally reported by the Philadelphia Inquirer’s Sam Carchidi. Head coach Alain Vigneault originally expected Hayes to play and he nor the team have yet to offer an update on Hayes’ absence. Max Willman was recalled from Lehigh Valley today under emergency conditions and is in the lineup for that game. Hayes has two points in two games this season after missing the team’s first 12 games while recovering from offseason core muscle surgery.

More injury notes from around the NHL:

The Vegas Golden Knights have seen enough from Zach Whitecloud to know they want him to stick around. The team has announced a six-year extension for the young defenseman that will keep him under contract through the 2027-28 season. The deal comes with an average annual value of $2.75MM. PuckPedia tweets the full breakdown: 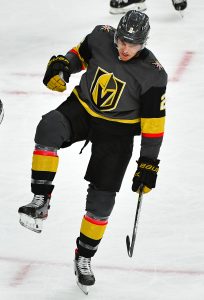 He may not be the name that draws the most attention on the Golden Knights roster, but Whitecloud is one of the organization’s biggest success stories. Overlooked for basically his entire career, Whitecloud didn’t play alongside other top prospects in the WHL, suiting up in the Manitoba Junior Hockey league instead where he was even cut multiple times. He wasn’t drafted by any NHL team–or even really considered–and was recruited by just one college program, Bemidji State University.

It’s with the BSU Beavers that he started to gain notoriety, and in 2018 after his sophomore season, he signed a three-year entry-level contract with the Golden Knights. He stepped directly into pro hockey and was a dominant performer for the Chicago Wolves, putting up the AHL’s best plus-minus in 2018-19 and then led all defensemen in playoff scoring. The following year he got a taste with the Golden Knights and then played in 20 postseason games with the team. In March 2020, he signed a two-year deal that still paid him just the league minimum.

Now a full-time roster player (when healthy), Whitecloud has rewarded that early faith the Golden Knights showed in him by signing away a good chunk of his career. Six-year contracts don’t often come about for players with just 72 regular season NHL games under their belt, but given his postseason performances and steady development, Vegas obviously believes he can be a long-term piece for them.

Given he’ll turn 25 in November, a six-year deal is buying out four years of unrestricted free agency. It also completely avoids salary arbitration and keeps him in the mix at a reasonable cap number through his prime years. Whitecloud will be in his thirties by the time he hits unrestricted free agency, something that seems a long way off right now.

Flames winger Johnny Gaudreau is one of the more intriguing players in the 2022 UFA class.  He’s not that far removed from being a point-per-game player – a mark he hit as recently as 2018-19 – but his per-game production has dipped the last two seasons.  In a piece for Daily Faceoff, former Sabres assistant GM Steve Greeley examined Gaudreau’s situation, highlighting how term will be a big element as the 28-year-old will likely be looking for that one last big deal over a short-term pact that gets him back to the market in a more favorable cap environment a few years from now.  Gaudreau is in the final year of a deal that carries a $6.75MM AAV and it will cost a bit more than that on his next contract.

More from around the Pacific Division:

3:28: Puckpedia reports that the deal is a one-way deal, meaning that he will be paid the $725K regardless of whether he’s in the NHL or AHL next season.

1:11 pm: The Vegas Golden Knights announced they have signed defenseman Zach Whitecloud to a two-year, $1.45MM extension ($725K AAV), giving the team some significant flexibility for next season as the team is expected to be right up against the cap once again. It’s actually a pay cut as Whitecloud was making $925K on his entry-level deal.

“We really have seen in his time with the NHL team that he has developed into a real good NHL defenseman,” said Vegas general manager Kelly McCrimmon. “He has earned the extension. It was a real good free-agent signing by us to be able to put him on our organization.”

Whitecloud, who was heading for restricted free agency this offseason, had taken on a key role with the Golden Knights after the team recalled him on Feb. 1. He has since played in 16 games, offering Vegas a solid defensive-minded third-pairing option and saw his playing time increase over the past five games before the season was suspended. He has one assist in those 16 games, but is averaging 14:19 of ATOI.

The Golden Knights looked to have picked up a big victory in 2018 when they beat out several teams to sign Whitecloud, who was considered to be one of the prize unsigned college free-agents after two impressive seasons at Bemidji State University. Whitecloud has worked on his game with the Chicago Wolves in the AHL where he even showed a little offensive prowess. He had six goals and 28 points that season. Those offensive numbers dipped this year as Chicago has struggled more with just seven points in 35 games. However, it was believed he was ready to take on an NHL role when he swapped places with Vegas rookie defenseman Nicolas Hague.

Whitecloud’s role is likely to increase with both Jonathon Merrill and veteran Deryk Engelland both expected to hit unrestricted free agency. And with salary cap at a premium, the team is likely going to depend more on their young blueliners, including Whitecloud, Hague and Jimmy Schuldt.