The 2023 draft is still months away, but fans of struggling teams are already salivating over the idea of adding talents like Connor Bedard, Matvei Michkov, or Adam Fantilli to their organization. Those three are among the 28 names that were included as “A” prospects in NHL Central Scouting’s preliminary “players to watch” list, released today. 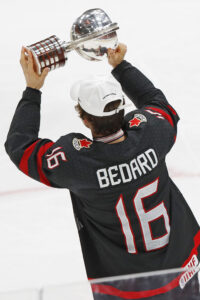 The full group of top prospects is as follows:

These are the players who are listed as “1st round candidates,” though it should be noted that there will be several changes before the draft actually rolls around. If you are noticing there is a distinct lack of defensemen listed, you’re not wrong. The preliminary list for the 2021 draft had nine defensemen listed in the 31-player “A” group, while the 2022 group had five out of 23 players listed. This year, the defensemen are almost equal with the goaltenders, showing just how rare difference-making blueliners might be.

Speaking of goaltenders, having two in the preliminary group is rather rare. The 2022 list didn’t have any, and a netminder didn’t come off the board until Topias Leinonen at No. 41 when the draft rolled around. The 2021 group shows how much things can change though. When their preliminary list came out, Jesper Wallstedt was the only goaltender listed as an “A.” While he did end up going in the first round, Sebastian Cossa – ranked a “B” prospect at this point two years ago – was the first goalie off the board, selected 15th overall.

For that matter, Kevin Korchinski, who went seventh overall to the Chicago Blackhawks just a few months ago, was a “B” prospect at this point last year. Korchinski had a breakout season with the Seattle Thunderbirds and skyrocketed up draft boards – something a handful of players do every year.

So while the “A” players may be early favorites to go in the first round, there’s a reason why the whole list is dubbed the players to watch. These are the names you’ll hear bandied about in the months to come, with arguments about upside and floor happening on bar stools and bleachers all across the hockey world.

With the Chicago Blackhawks deciding to rebuild halfway through their previous rebuild, speculation has run rampant about all-time great Patrick Kane’s future with the team. If dealt, he’d be one of the best players and biggest names traded in the past few seasons, joining blockbuster deals like the Jack Eichel and Erik Karlsson trades. However, TSN’s Darren Dreger today pumped the brakes on trade rumors, saying that Kane’s camp “remains undecided” and that any rumors at this point are purely speculative. 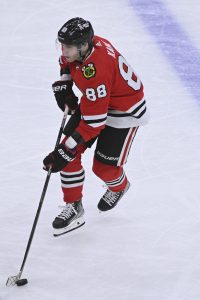 At 33 years old, Kane still has 100-point potential while logging heavy minutes. He hasn’t hit that mark since posting 110 points in 2018-19, but he’s stayed well above a point-per-game pace since then on a continually struggling Blackhawks squad. One of the most decorated American-born players of all time, his playing ability still remains very close to his prime.

It’s because of that fact that a potential trade seems so realistic to fans around the league. It would’ve seemed a guarantee just a few seasons ago that Kane would remain a Blackhawk for life, but as the team failed to rebuild quickly (or properly in the slightest) and management changed hands drastically, no one would blame him for not wanting to waste the last few seasons of his peak on a sinking ship.

With or without Kane, Chicago figures to be a bottom-five team next year with little doubt. Trading him could, however, end up being the difference between a top-five selection and the 2023 first overall selection, which would land them a potentially generational center in Connor Bedard.

Just one season away from unrestricted free agency, it could make a lot of sense for Chicago to deal him ahead of the season too. While they might not get as high of a return without an extension in place for Kane with his new team, it could open the door for him to return to the team in 2023-24 to potentially usher Bedard into the league if they do land the top pick.

Regardless, Kane’s choice will be an important one to watch as the offseason progresses. He’ll still command a fair bit of salary cap space even if Chicago does retain salary, unless the acquiring team wishes to pay a third team extra assets in order to retain additional salary.

Hockey Canada has announced the roster for this month’s U18 World Championship, and it includes several high-profile talents that should be of interest to NHL fans. Connor Bedard and Adam Fantilli, two of the top prospects for the 2023 draft, will both take part in the tournament that kicks off Saturday.

The full roster is as follows:

While there will be a scout from every NHL team there to watch the group of 2022-eligible players, it is likely Bedard will draw much of the fan attention. The 16-year-old Regina Pats superstar was the first WHL player ever granted exceptional status, allowing him to enter the CHL a year early, and has lived up to the high expectations. In his first full season, he scored 51 goals and 100 points in 62 appearances, while also starring for Canada at the World Juniors. Despite the tournament being shut down after two games, he already had recorded four goals and five points.

Fantilli and other 2023-eligible players should also draw plenty of attention, as next year’s draft class continues to be hyped as a very deep group. The Toronto-born forward skipped out on the OHL to play in the USHL instead, maintaining his NCAA eligibility and joining the powerhouse Chicago Steel program in 2020. The 6’3″ Fantilli scored 37 goals and 74 points in 54 games this season, while also racking up 93 penalty minutes.

As always, Hockey Canada’s selection camp for the World Junior Championship was a who’s who of top prospects. The group vying for a spot on the 2022 entry was immensely deep and talented, so much so that some truly talented names didn’t even make the camp roster. Of course, this means that some very difficult cuts had to be made as well. With camp wrapping up early Sunday afternoon, Hockey Canada has announced the expected roster for the 2022 WJC:

Of note, while many elite drafted prospects will grace the Canadian roster, it’s two undrafted names that will draw substantial spotlight. Wright and Bedard are the presumptive top picks in each of the next two NHL Drafts and will get their shot to further cement that status on the biggest international stage for U20 players.

The 2022 World Junior Championship will be held in Edmonton and Red Deer, Alberta this year. The tournament begins on December 26 and culminates with the gold medal game on January 5.

The 2022 World Junior Championship is right around the corner, set to kick off on December 26 in Edmonton and Red Deer, Alberta. For Hockey Canada, selection camp will start in just a few days in Calgary, where the final roster will need to be picked. Today 35 players were invited to that camp, a group that will be pared down to 25 that will travel to the tournament.

The invitees, with their NHL affiliation:

This does look like quite an imposing group, though there are several notable omissions. In addition to Brandt Clarke, who hit the news yesterday, Hockey Canada decided not to bring names like Carter Savoie, Matthew Savoie, and Brennan Othmann, among others. The group does include Bedard, though, who won’t even be eligible for the draft until 2023. The 16-year-old has 11 goals and 17 points in 28 games for the Regina Pats of the WHL after becoming the league’s first player granted exceptional status.

Move over Alexis, a new Canadian prospect is here. Connor Bedard, the first player to be granted exceptional status in the WHL, suited up for HV71 in the Swedish under-20 league today. Bedard only turned 15 a few months ago and was picked by the Regina Pats first overall in the 2020 WHL Bantam Draft, but is getting his first taste of play this season overseas.

The incredibly shifty, talented forward from Vancouver is eligible for the 2023 NHL draft but is already wowing scouts all over the world. His development is obviously extremely important, but a move like this to play overseas only highlights how difficult this season could be for many other prospects that are waiting on their WHL and OHL schedules to begin. Not everyone is Bedard, receiving a prime opportunity to play with a strong European organization.